Club3D has been around for almost 20 years as a graphics card brand and, at one stage, was famous for being the only manufacturer who worked with all of the major GPU producers. They are now highly focused and want to bring more products to the UK market. We managed to catch up with Gerjan Blonet, an expert on Club3D matters.

Let's start at the beginning. We asked Gerjan when the company was formed.
“The company was established back in 1997 in Hoofddorp, the Netherlands as a manufacturer of computer components”, he explained. “So we’re in our 18th year of trading now. My colleagues have a wealth of experience; they’re almost walking graphics cards. Not me though, I’ve been with Club 3D since 2012 so I’m no guru yet”.

So what was the driving force behind the company – the inspiration?
“The strong desire of our founders was to establish a brand with a fresh approach on offering a high quality, complete chipset solution at affordable prices”, he said. “A brand that relies on having a European base, close to our customers with short communication lines. Our warehouse is located next to Schiphol airport itself. So we don’t have to ship from the Far East”.

In the KitGuru Annual Awards 2014, we saw a lot of mainstream technology companies using their brand to gain share in the peripherals market, for example, is Club3D 100% focused on graphics?
“In the early days we only did graphics cards”, said Gerjan. “Back in 2001, Club 3D was the first AiB (Add In Board partner) for ATI Technologies. In 2006 we started to diversify our product range by introducing sound cards and in the past years our current range of SenseVision, Power supplies and cables/ adapters”. 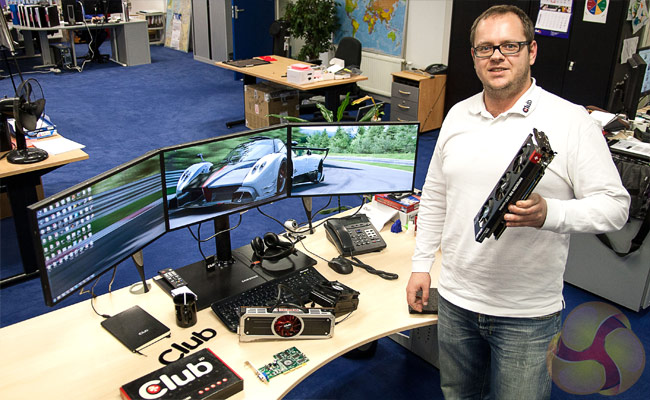 At one point, Club3D was the only company to offer all 4 major GPUs – what does Gerjan offer now and what are Club3D's plans for the future?
“Correct, he said. “After our partnership with ATi Technologies, our goal was to be the pioneer for a Total Graphics Solution. So we formed partnerships with Nvidia, S3 Graphics and XGI Technology, the latter two probably unknown by your younger readers”.

“Since early 2013 we became an ‘AMD only’ AiB. We share AMD’s vision and believe they have the lead when it comes to technological innovation. In the near future we will continue to focus on our range of PokerSeries gaming cards and expand our innovative SenseVision range of Multi Monitor solutions which mostly use DisplayLink chips”.

Everything through one cable

Graphics card manufacturers have a choice when they set up business. They can push 100% with their own brand, or choose to use their brand for consumers (i.e. cards sold through stores etc) and keep a ‘white label' going for supplying top PC companies. Example?  When we cracked open an HP desktop a while back, it became obvious that the mainboard and graphics card had been made by MSI – although there was no MSI branding anywhere.

“We focus on PC Gaming enthusiasts and system builders”, he told KitGuru. “Compared to some other countries it’s interesting to see how popular and well established home-grown system builders are in the UK. But with their high level of enthusiasm, knowledge, quality, service, their selection of the latest components and ability to create bespoke systems at decent prices, buying from a local system builder is a no-brainer for me if I was in the market for a new gaming rig”.

Reference design have been getting better in recent years, but cooling is certainly one area where an AiB can differentiate its offer. What is Club3D's point of view?

“Reference designs set a bar when it comes to the balance between performance, noise/ heat production and power consumption”, explained Gerjan. “However in many cases there is room to improve the cooling performance and noise levels while remaining the reliability by customizing PCB, components and cooler. For that reason we put a lot of effort in our PokerSeries gaming cards which aim to be both cooler and quieter than a reference design. Oh and better looking of course!”

So how difficult is it to create a custom cooling solution?

“Some years ago we introduced our high performance CoolStream cooling solutions which are now a standard feature on the PokerSeries range”, he told us. “Depending on the GPU it can be quite a task to develop a cooler which is not only nice to look at but does its job cool and quietly under any load. The current generation of CoolStream coolers has up to 3 fans and up to 6 copper heatpipes to dissipate the heat while remaining as quiet as possible. We’re constantly experimenting with new cooling solutions though. Personally I’m particularly impressed by the advanced hybrid cooler on the current Radeon R9 295X2 card”.

Yep, hard to argue that. AMD batted way above its weight when it came to the 295X2 cooling solution.

We see a growing demand… Multiple monitors for everyone

After hunkering down in the bunker for 6-7 years, we can all feel the market being re-energised and resellers look like reporting record sales for parts of 2014/15. Against that backdrop, what goals does Club3D have for 2015?

“According to the latest JPR report the PC Gaming market will continue to grow to $ 23B globally in 2017, we see no recession in the PC Gaming market!”, he exclaimed. “Given the current market share of AMD graphics cards our main goal is to introduce great performing, attractively priced new PokerSeries cards and claim back market share from the competition.
Another goal is to expand our SenseVision range of Multi Monitor solutions by focusing more on B2b channels like the enterprise notebook and professional tablet markets. We see a growing demand and we’re determined to increase our business and market share there. Multiple Monitors for everyone!”

KitGuru also likes the increased focus on screen real estate – more is definitely better for a number of reasons. 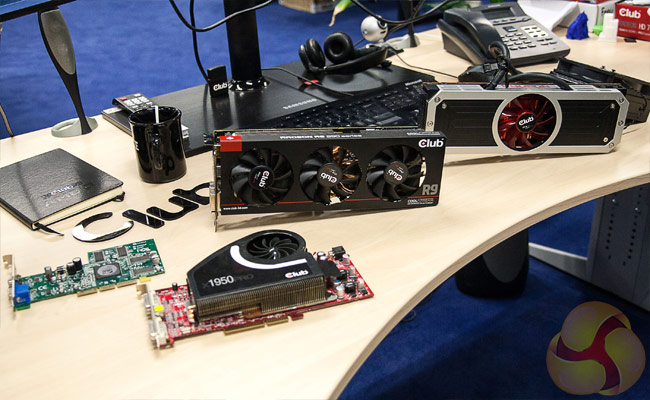 Enough about the company and products, let's find out a bit more about Gerjan with KitGuru's standard set of personal questions.

What did Gerjan do before Club3D?
“I’ve been assistant store manager at a mobile phone shop, I sold cars at a Toyota dealership and I worked as a sales rep for a large manufacturer of Sunglasses. But I was always a tech and gadgets nut”.

If you need to impress your friends, what do you cook at home?

“Hehe my friends are usually not impressed by my cooking skills. But my steaks are pretty decent if I say so myself. My home baked cakes are not too bad either, but to say impressive?”

Which food do you love, but you can’t make it right – so you always need to eat it at a restaurant?
“I like Chinese, Japanese and Indian food but I lack the skills and patience for that. Luckily there are some eastern restaurants in my neighbourhood in Haarlem”.

KitGuru says: A big THANK YOU to Gerjan for taking the time to speak with us.