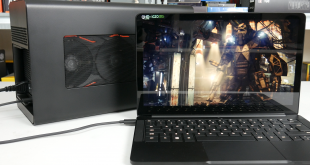 External GPU enclosures are nothing new – in fact, Razer has already released two of them prior to the one we are looking at today. The thing that makes the Core X stand out is its pricing – at £259.99, it over £200 cheaper than the Core V2, Razer's top of the line GPU enclosure. What's it like to use, and can you actually get decent performance from an external graphics card? Let's find out…

The idea behind the Core X, or any external GPU enclosure for that matter, is very simple – you install essentially any modern graphics card into the dock, and then the dock connects to your laptop via Thunderbolt 3. Laptop depending, this will provide up to 4 PCIe 3.0 lanes of graphical bandwidth, giving you a much improved gaming experience over integrated graphics.

The thing the Core X does very well, is to make that idea a reality without any fuss at all. The enclosure exterior is essentially a black aluminium box with some ventilation, and to get to the inside, all you do is pull on a handle at the rear of the box. This will pull out the the internal hardware (which is mounted on a rails system) and thus gives you access to the single PCIe slot where you can install your graphics card.

You can find a full list of supported graphics cards over HERE, but anyone with a GeForce 900-series card or newer will be fine, and AMD support stretches back to the R9 2XX series. The physical size of the enclosure also allows pretty much any aftermarket card to fit, too – we used an ASUS ROG Strix GTX 1080 Ti, which is about as big as they come, and it slotted in with room to spare. Once the card is installed, a single thumbscrew holds it in place.

With the GPU now installed and the box sealed once again, all that is left to do is provide power to the enclosure (via an included kettle lead) and connect the Core X to your laptop of choice. Razer provided us with a 2017 Blade Stealth to use, but any modern laptop with a Thunderbolt 3 port should work fine. It is worth checking on the specifications of said Thunderbolt 3 port, though, as some laptops will only provide 2 PCIe lanes per port which will obviously reduce the total performance of the graphics card.

The Blade Stealth immediately recognised the Core X had been plugged in, and I was prompted to confirm that I wanted the Core X to utilise the Thunderbolt 3 connection. You will need to download drivers for your chosen graphics card, but after that the setup process is complete.

There are a few other things worth mentioning before moving onto performance. First, the Core X comes with a 650W power supply. Not only does this allow for up to 500W of power for a graphics card – more than enough for even a Vega 64 – but it also means the Core X can provide up to 100W of power to your laptop, allowing the laptop to be charged while it uses the external GPU.

Less positive is the lack of extra I/O – the only connector on the Core X is the Thunderbolt 3 port, which is obviously required to connect the dock to the laptop. That means if you don't have many (or any) spare USB ports on your laptop – which is more than likely going to be the case for a modern Ultrabook – the Core X won't help you. The Blade Stealth is better than most with 2x Type-A USB ports, but a MacBook or Dell XPS user is going to need some kind of external hub for connecting a headset and mouse. Razer's Core V2, by contrast, provides an extra 4x USB 3.0 ports, plus Ethernet.

The second thing to note is the length of Thunderbolt 3 cable provided – it is only 0.5m long, and that can cause issues with how you want to position your laptop and the Core X. To be fair, this is not an issue with the Core X specifically, rather it is a limitation of the Thunderbolt 3 interface. Essentially, you can only get the full 40Gbps transfer rate that Thunderbolt 3 supports, with a 0.5m cable. 1m or 2m cables will only deliver 20Gbps, halving the bandwidth.

That is, assuming you stick with a passive cable – the type included with the Core X. You can get longer Thunderbolt 3 cables which support the full 40Gbps, but these have to be active cables – which typically cost far more than their passive counterparts. Considering the Core X is about providing an external GPU enclosure for as little as possible, adding on another £60 to the price for a longer, active cable wouldn't make a whole lot of sense.