After Nvidia officially unveiled RTX 3060 yesterday, many AIB partners have since announced their custom-cooled GeForce RTX 3060 graphics cards. While we can expect more models to trickle through over the next few days, we’ve already seen quite a variety of RTX 3060 cards announced from the likes of MSI, Zotac, Gigabyte, and more that we will cover here.

The Zotac RTX 3060 AMP White Edition features RGB lighting and an all-white theme, including the fans, shroud, and backplate. Being 232mm long, the Zotac RTX 3060 AMP White Edition should fit in most systems of today. Featuring Freeze Fan Stop and Active Fan control, this card is equipped with a 90mm fan and a 100mm fan (11 blades each), 5x 6mm heat pipes, and a “wide aluminium fin-stack array heatsink” to handle the cooling process of the GPU. The GPU core comes factory overclocked, boosting up to 1837MHz.

MSI seems to be the manufacturer presenting the most RTX 3060 SKUs, including the single-fan Aero ITX card, dual-fan Ventus and Gaming cards, and triple-fan Ventus and Gaming cards. All Gaming cards feature RGB lighting and are equipped with Torx 4.0 fans, but while Trio cards feature Tri Frozr 2 cooling solution, the non-Trio feature the Twin Frozr 8 cooling system. While core clocks haven’t been detailed yet, the “X” models should come with higher clocks than the “non-X” SKUs.

The Ventus cards are equipped with Torx 3.0 fans, a brushed finish backplate, and feature solid aesthetics that will fit within most builds. Both dual-fan and triple-fan Ventus cards will feature a factory overclocked (OC) version and a non-OC version running at stock speeds.

Being the smallest of the bunch thanks to its single-fan cooling solution, the Aero ITX card is perfect for SFF systems. It’s not clear if there will be an OC version, but we expect that the non-OC will run at stock clocks.

Inno3D’s initial RTX 3060 lineup includes the Twin 2x (OC) series, featuring a backplate for added protection and dual-fan design (90mm fans) that cools the heatsink connected to the GPU by 4x heat pipes. The non-OC Twin 2x card is stock clocked, but the OC variant boosts up to 1792MHz.

Inno3D is also launching the iChill X3 Red series, equipped with a triple-fan cooling solution (90mm fans) and a shroud highlighted by red LEDs. The heatsink is connected to the GPU by 6x copper heat pipes for increased heat dissipation, especially useful for this card given its factory overclock of up to 1837MHz.

The Colorful iGame RTX 3060 Ultra W OC comes with a white triple-fan cooling solution and a white backplate that will fit into any white-themed build. The Ultra W OC’s heatsink has 2x 6mm heat pipes and 2x 8mm heat pipes “connected to the fins using integrated reflow soldering”, combined with 2x 90mm fans and an 80mm fan at the centre.

The Colorful iGame RTX 3060 Advanced OC also features a triple-fan cooling solution, but with a black, dark grey, and red theme. The premium shroud comes with a metallic finish that highlights the “Light Frozen” lighting effect coming from the “Energy Core” lighting around the middle fan. The heatsink features 4x 8mm heat pipes.

The last Colorful card is the RTX 3060 NB, which features a similar cooling solution to the Ultra W OC, with 2x 6mm heat pipes, 2x 8mm heat pipes, 2x 90mm fans, and an 80mm fan at the centre, but with a half black/half red shroud. The metal backplate gives extra protection to the card while also increasing the card’s passive cooling capabilities.

The Gigabyte Eagle uses a two-fan design, each fan measuring 100mm. There will be an OC and a non-OC variant of this card, meaning that the OC variant will come factory overclocked to offer better performance out-of-the-box. The Gigabyte Eagle cards feature RGB lighting that users can configure with RGB Fusion 2.0 or synchronise with other compatible devices.

Gigabyte RTX 3060 Vision cards come with a unique “elegant silver and white” theme, staying away from the most common black and grey coloured graphics cards. Suitable for white-themed PCs, the Vision cards feature a triple-fan design similar to the one used on the Gaming cards, ensuring stable operation and high-performance of the GPU.

ASUS’ top of the line RTX 3060 is the Strix model, available in OC and non-OC models. This uses a triple-fan cooler, with a stylish-looking shroud, and 2.7-slot cooler. It also sports dual-BIOS capabilities, as well as a metal backplate.

As for the TUF card, this is also a triple-fan cooler and appears to use the same all-aluminium shroud as other TUF cards we have reviewed this generation.

Lastly, there’s the smaller Dual card, which is a simpler design with two fans, and it also appears to be ‘just’ a dual-slot thickness. ASUS is yet to release confirmed clock speeds for its RTX 3060 SKUs.

Both the PNY RTX 3060 XLR8 Gaming Revel and Uprising features dual-fan, dual-slot design with a relatively small footprint. The Uprising card is rather simple with a black shroud and black metal pass-through backplate, while the XLR8 Gaming card features PNY’s Epic-X RGB lighting system around the card. According to PNY, both cards boost up to an impressive 1852MHz core clock, but the memory appears to be clocked below stock settings, at 14Gbps. 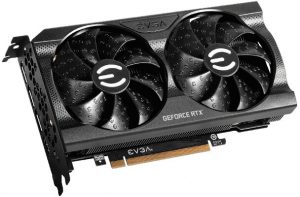 Featuring a dual-fan cooling solution and a dual-slot design, the EVGA XC and XC Black are compact graphics cards with short PCBs and 0db fan mode preventing the fan from spinning when the GPU is at low temperatures. Thanks to their reduced size, these cards can easily fit in any build, including SFF PCs. The all-metal backplate gives additional protection and passive cooling to the card, preventing it from bending while also providing some extra heat dissipation.

KitGuru says: What do you think about the Nvidia RTX 3060 GPU? Which custom-cooled AiB seems the most interesting to you?