You’ve seen the Vega news and you’ve read the Vega review, so now it’s time for a preview of the Asus ROG Strix RX Vega64 O8G Gaming, which is the first AIB (Add-In-Board) partner Vega64 that has broken free from the R&D Laboratory. 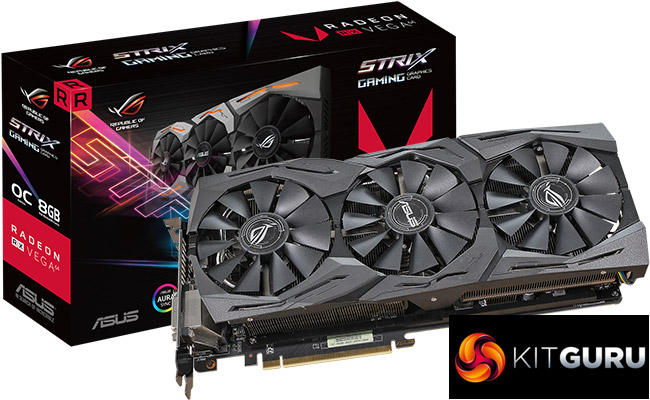 KitGuru was invited to the office of Asus UK where we met three members of staff from Asus Taiwan who were hand carrying their new Asus ROG Strix RX Vega64 O8G Gaming graphics cards around Europe on a lightning media tour.

Naturally, we wanted to see how well ROG Strix RX Vega64 performed, so we were disappointed when we were told that clock speeds had not been finalised. Indeed, AMD was still releasing data to their AIB partners. Shortly before we arrived at the Asus office, they had been busy updating the BIOS of the ROG Strix RX Vega64 and claimed a performance increase of ten percent. From a BIOS update.

It was perfectly clear that even at this late date the ROG Strix RX Vega64 was still being developed so we changed our focus to the cooler, which is the weakest part of the reference design. David Yang, Associate Director in the Gaming & Peripheral Dept. at Asus told us the development of ROG Strix RX Vega64 consisted in large part of taking a 300W cooling package off the shelf which in turn necessitated the use of a two-and-a-half slot design that looks very similar to a GTX 1080Ti. Incidentally, the PCB and all its components are assembled entirely by robots in a move that reduces the RMA rate by 30 percent.

Humans only get involved when it is time to install the cooler, and that is a tricky affair on a graphics card that uses HBM2 as the cooler needs to work perfectly on both the GPU and memory. Asus calls the surface finish on the cooler MaxContact and says the copper heat spreader is machined to double the contact area that meets the GPU. Asus also told us they use thermal compound that is more viscous than you might expect, to prevent it from being pumped out over a period of time.

Other features of the ROG Strix RX Vega64 include Aura Sync lighting, a substantial backplate, triple cooling fans and Asus FanConnect II. The main claim that Asus makes about ROG Strix RX Vega64 is that the working temperature is 78°C, compared to the reference design which runs at 85°C. That’s a useful advantage however Asus also claims the noise levels are 29dB compared to 43dB for the stock graphics card, which looks like a double whammy for the reference design.

We will be addressing all those points when we get a finalised card in for review but right now we are happy to say the ROG Strix RX Vega64 looks impressive and is amazingly quiet when working under heavy load. In addition, we would love to see Asus squeeze more performance from Vega64.

KitGuru says: We have to hope the Asus ROG Strix RX Vega64 can fix AMD’s dual problems of noise and heat. The chunky two-and-a-half slot GPU cooler looks like a wise move and aesthetically the new Asus card looks exactly as good as you would expect.