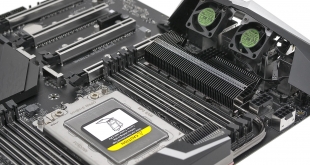 When Gigabyte unveiled the X399 Aorus Xtreme motherboard we could see they were taking AMD 2nd Gen. Threadripper seriously.

The new Threadripper WX models increased TDP from 180W to 250W so while it would be quite possible to install a 32-core 2990WX in a motherboard such as Gigabyte X399 Aorus Gaming 7 you wouldn’t be surprised if it struggled to supply the CPU with enough power. Gigabyte was clearly thinking along the same lines and has updated the VRMs from the 8+2 configuration used in the Gaming 7 to a 10+3 arrangement in the Xtreme. In addition to this hardware Gigabyte has put a significant emphasis on keeping the components nice and cool.

Gigabyte has included a total of three Ethernet ports, which consists of two Intel Gigabit and one Aquantia 10 Gigabit. To our mind 10Gbit is an expensive luxury for gamers however a number of our YouTube audience are absolutely in love with this feature. Nonetheless, we maintain that gamers will be perfectly well served by Gigabit while it is workstation users who will benefit from 10Gbit.

The obvious conundrum here is that X399 Aorus Xtreme is, apparently, a gamer’s motherboard while the 32-core Threadripper 2990WX CPU is clearly aimed at the professional market. The way we see it is that the X399 Aorus Xtreme does indeed carry the Aorus gaming brand name however it seems to have more in common with a Designare workstation motherboard that has been garnished with some RGB lighting.