Cooling Performance.
CPU cooling was quite straightforward with the custom loop set-up on our test bench. It was notable the CPU ran around ten degrees cooler in Blender than it did in AIDA64, which gives a good indication how each workload stresses the CPU. We knew full well that higher core voltage and clock speed would result in higher CPU temperatures, and our chart reflects that point.

We were more interested in seeing how each motherboard responded in terms of VRM temperatures as the workloads were truly epic. We were not disappointed; when it comes to VRMs the dividing line between one motherboard and another is huge. 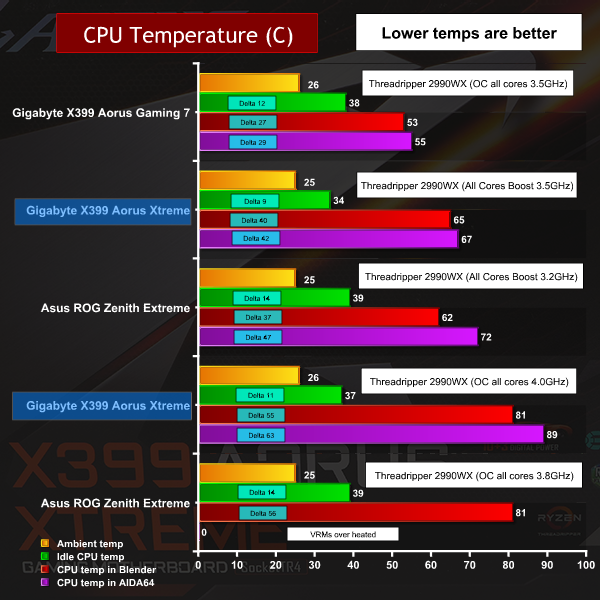 CPU Cooling Performance Overview.
It is a statement of the obvious to say that lower CPU clock speeds generally give you lower CPU temperatures, however we found an exception to that rule. We started nice and easily with the Gigabyte X399 Aorus Gaming 7 that was running at a fixed 3.5GHz on low voltage and then to the Xtreme that was Boosting to 3.5GHz on all cores and delivering more performance than the Gaming 7.

After that we come to the Asus ROG Zenith which looked relatively hot and bothered at a lowly 3.2GHz and at the top of the chart we have the Xtreme at a manual overclock of 4.0GHz. The Blender CPU temperature is just about OK at 81 degrees while AIDA64 is absolutely pushing the limits at 89 degrees.

Asus ROG Zenith was on course to deliver the same temperatures at 3.8GHz however the VRMs were not up to the task in AIDA64 and the board shut down before we got a final result. 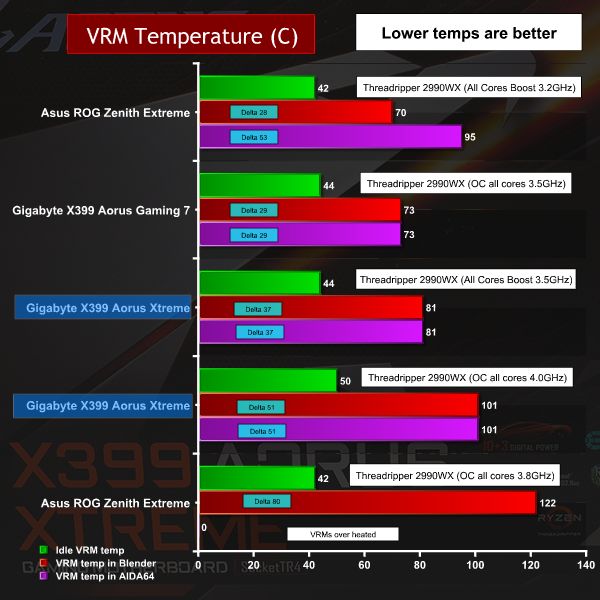 VRM Cooling Performance Overview.
Our chart for VRM temperatures is ordered by the figure we saw in Blender, rather than AIDA64. The two Gigabyte boards operated at identical VRM temperatures in both tests, however the Asus ROG Zenith Extreme behaved quite differently.

With all cores Boosting to 3.2GHz the VRM temperatures in AIDA64 were 25 degrees higher than in Blender. With the CPU overclocked to 3.8GHz we saw the VRMs pushed very close to their limits in Blender and in AIDA64 the board did indeed pass the 125 degree limit and the thermal protection shut the board down.

We monitor CPU power draw using Powenetics project software from Cybenetics which means we are able to monitor both the overall system power and also the power that is feeding directly to the CPU cores. As you will see these numbers show significant differences between one Threadripper motherboard and another. 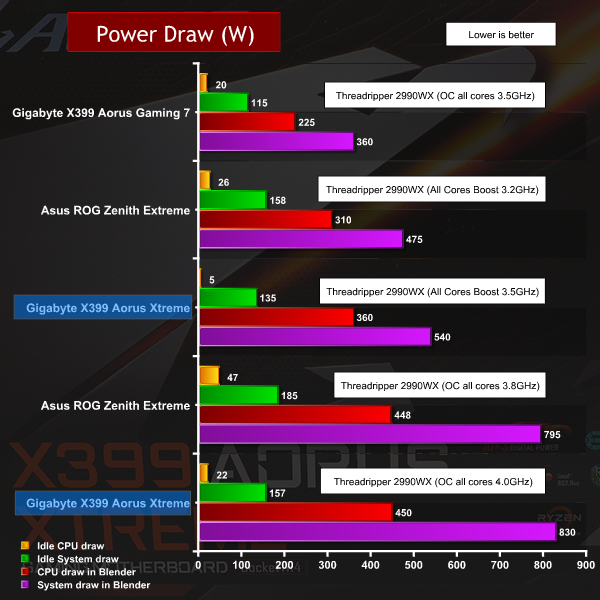 Power Draw Overview
The Gigabyte X399 Aorus Gaming 7 demonstrates that Auto voltage settings at 3.5GHz draw relatively little power. Glance back at the previous charts and you will see this board had low temperatures and low performance, so this behaviour is entirely consistent.

Asus ROG Zenith Extreme drew more power at 3.2GHz than the Gaming 7 did at 3.5GHz, but there was nothing special to report. On the other hand when the Asus was pushed to 3.8GHz the power figures climbed significantly with figures that were almost identical to the Gigabyte Xtreme at 4.0GHz.

The point here is that the VRMs on the Xtreme operated at temperatures about 25 degrees cooler than the Asus, which demonstrates the benefit of the ten phase VRMs used by Gigabyte, along with the superior cooling system. When you push a 32-core Threadripper to the limits the power draw is significant and as the clock speed climbs towards 4.0GHz the CPU cores require 450W, while the overall system power draw will be around 800W.