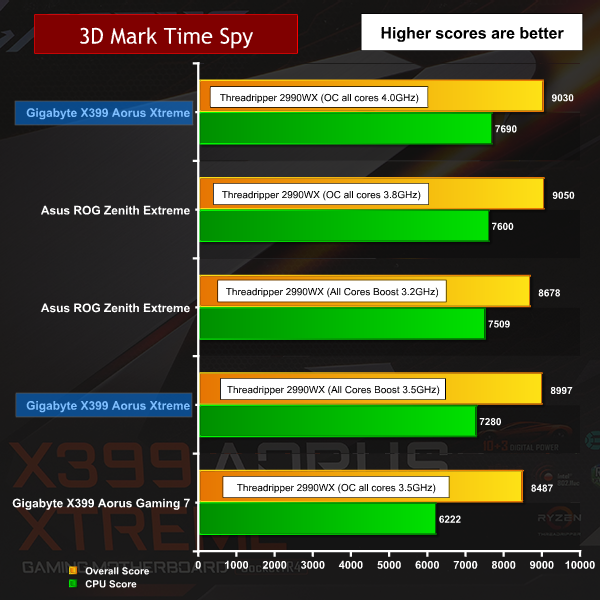 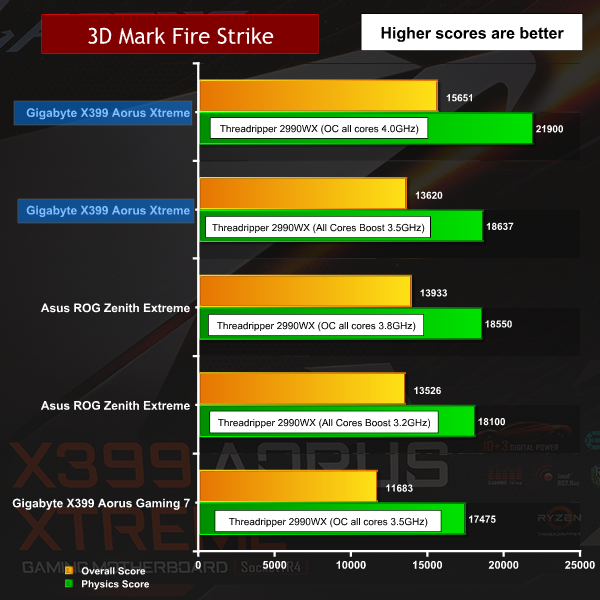 Performance and Overclocking Overview
At stock clock speeds with the CPU power limit set at 250W you will struggle to separate the Gigabyte X399 Aorus Xtreme from any other X399 motherboard on the market. The 2990WX CPU will happily run around 3.1GHz all day long without any excitement and will handle video editing and other tasks with aplomb.

We have to emphasise that 2990WX is a powerhouse of a CPU with a massive number of cores and low clock speeds that is well suited to Cinebench or Blender, however it cannot compete with Ryzen 7 or Intel Core i7 in the gaming sphere.

Throughout this review we are comparing X399 Aorus Xtreme with Asus ROG Zenith Extreme and Gigabyte X399 Aorus Gaming 7, however we have included a 3D Mark Fire Strike graph with a Gigabyte Z370 Aorus Ultra Gaming/Core i7-8700K and ASRock X470 Taichi/Ryzen 7 2700X combos to illustrate the point. 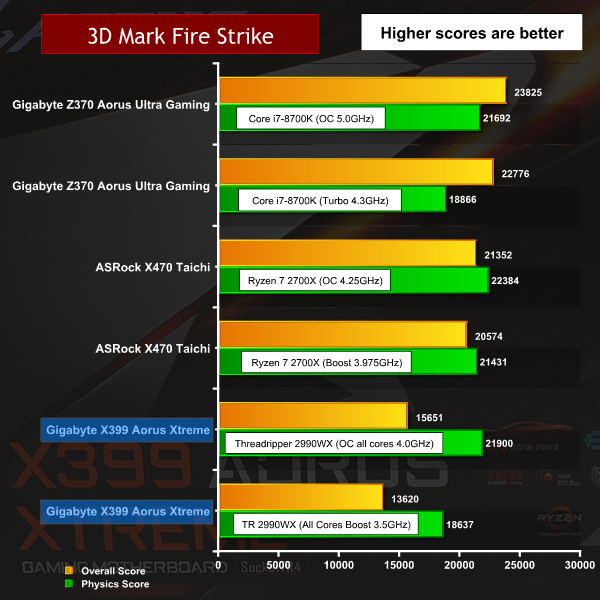 This has been covered on a number of occasions but the TLDR version is that most software cannot take advantage of a CPU with a massive number of cores. Added to that Threadripper WX has a relatively low clock speed and only two of the four cores have access to the DDR4 system RAM, so performance can be both unpredictable and slightly disappointing.

On the other hand, if you use highly threaded software and can persuade the CPU to run at a higher clock speed you can achieve results that are quite astonishing.

That’s an awful lot of ‘on-the-hand-but-on-the other hand’ shilly shallying but it boils down to the point we made over and again in our video about power limits. Use the BIOS to raise the power limit to 350W and you will see the CPU magically Boost to 3.5GHz on all cores and deliver a welcome increase of an extra ten percent CPU performance.

This is the point where you can see a dividing line between X399 Aorus Xtreme and earlier X399 boards such as Gigabyte X399 Aorus Gaming 7 and Asus ROG Zenith Extreme which do not have the same ability to deliver power as the Xtreme.

Overclocking the X399 Aorus Xtreme to 4.0GHz on all cores was very straightforward as we simply set core voltage to 1.35V and raised the multiplier to 40x. There is a good chance we could have achieved stability at a lower core voltage however the situation seemed perfectly satisfactory so we left the settings alone.

Overclocking the Gigabyte X399 Aorus Gaming 7 was a much more difficult proposition and we found that any changes to Vcore and Load Line Calibration were likely to throw up a blue screen. We found the only way we could work with the board was to leave voltage settings on Auto and simply adjust the multiplier (with XMP enabled). This approach allowed us to run at 3.5GHz on all cores.

By contrast the Asus ROG Zenith Extreme was happy to overclock however the power and heat levels were unhealthy with a core voltage of 1.35V so we pulled the settings back to 1.30V and found this gave a stable clock speed of 3.8GHz on all cores.

You can predict the shape of our performance graphs from those figures as higher clock speeds directly lead to higher performance. What is less obvious is that manual overclocking on 2nd Gen. Threadripper looks like a bad idea, in exactly the same way we consider it a bad idea with 2nd. Gen. Ryzen.

We demonstrated with Ryzen 7 2700X and Ryzen 5 2600X (and to a certain extent with the Raven Ridge APUs) that AMD has worked wonders with Precision Boost 2 and XFR2, such that the CPU will dynamically adjust its clock speed under load, provided it has sufficient cooling and power.

This is more effective than manually overclocking on all cores as the CPU is able to run a handful of threads at higher speed when required, then as the number of cores under load increases the clock speed gracefully declines. In the case of the X399 Aorus Xtreme we were able to overclock to 4.0GHz without difficulty however our preference would have been to leave the board on Auto settings with an increased power limit.

This was precisely what Gigabyte delivered when they sent us the Pre-Beta BIOS Tx1. Provided it was made clear to the end user that the power limit had been raised, we would consider this the ideal set-up.