EVGA Corp. is working on two new mainboards based on Intel Corp.’s Z170 chipset for the upcoming Core-series “Skylake” processors. One of the mainboards is designed for gamers with overclocking ambitions and will not be too expensive. The other one is aimed at hardcore enthusiasts, who demand to have a no-compromise solution.

Although EVGA Corp. offers only five or six mainboard models in total, a lot of performance enthusiasts admire the brand. Perhaps, that is because the company was co-founded by Andrew Han, a co-founder of legendary Epox. Or maybe because in mid-2000s EVGA acquired product design team from Epox and became a new legend itself. In any case, new motherboards from the company are highly-anticipated by many. Based on what KitGuru’s Leo Waldock saw at Computex, EVGA’s Intel Z170-based platforms look very promising. 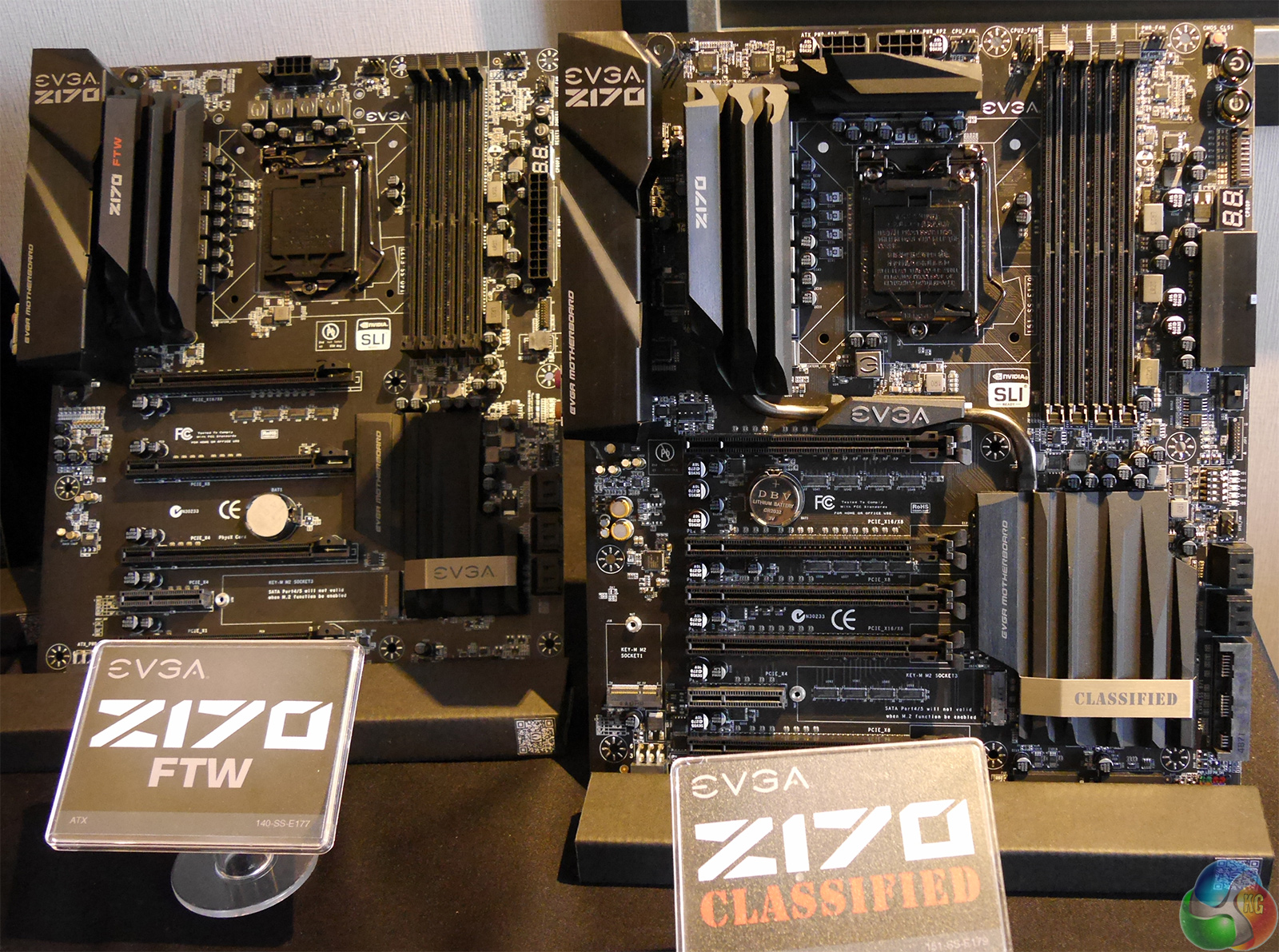 The EVGA Z170 FTW mainboard for LGA1151 processors will be aimed at gamers who demand to have something considerably better than average, are willing to overclock their central processing units (CPUs) and install more than one graphics adapters as well as a high-performance solid-state drive.

The EVGA Z170 FTW mainboard has sophisticated overclocking capabilities, it even has an additional 6-pin PCI Express power connector to provide maximum stability for PCIe x16 slots. Still, do not expect too lot from it.

EVGA’s Z170 FTW should be a good thing for the money (the Z97 FTW is sold for $149 now), but is not developed to be an absolute performance champion. The purpose of the product is plain and simple: it should allow building premium multi-GPU systems with high-end storage, but cost a reasonable amount of money.

For many years EVGA’s Classified series has been a darling of extreme overclockers and benchmarkers. The EVGA Z170 Classified for Intel Core i7 “Skylake-S” LGA1151 processors will not be an exception. The mortherboard is designed from the ground up to provide maximum functionality and extreme overclocking potential.

The EVGA Z170 Classified has four 288-pin DDR4 DIMM slots, five PCI Express 3.0 x16 slots, a PCI Express 3.0 x4 slot for high-end SSDs, an M.2 connector for high-end M.2 2280 SSDs (presumably connected using PCIe 3.0 x4 bus to the chipset and featuring up to 4GB/s of bandwidth), an M.2 connector for tiny M.2 2240 SSDs, four SATA 6Gb/s ports, two SATA Express ports, integrated Creative Core 3D 7.1-channel audio, two Gigabit Ethernet ports, NVMe and so on. It is unknown whether the motherboard features USB 3.1 and Thunderbolt 3, but since EVGA recently added a USB type-C port to one of its Intel X99-bases solutions, this is a possibility.

The EVGA Z170 Classified has everything that even a very demanding enthusiast can desire. The thing that is absent on the motherboard is another M.2 2280 connector in order to run two high-end SSDs in RAID 0 mode to get absolutely incredible performance. Nonetheless, if you want to build a maxed-out system based on Intel’s “Skylake-S”, this is a mainboard to consider. Obviously, the EVGA Z170 Classified will not be affordable (the Z97 Classified costs $299), but ultimate performance comes at an ultimate price.

Just like other Intel Z170-based mainboards for LGA1151 processors code-named “Skylake”, the EVGA Z170 FTW and the EVGA Z170 Classified will become available in August or September, when Intel releases its Core i7-6700K and Core i5-6600K central processing .

EVGA will announce prices of its new motherboards at launch, but expect them to be comparable to current-generation solutions for Intel LGA1150 processors.

KitGuru Says: EVGA’s mainboards are traditionally very impressive. It will be interesting to see how good they will actually be!