For those of us with more than one device that sees regular usage, keeping in control of where important files are stored can rapidly become a complex chore. And that's without even bringing the differing backup and file transfer procedures of handheld devices into the picture.

The Asus Transfer Express is a central control hub that aims to minimise file synchronisation, PC control, and handheld device usage headaches. Its functionality extends from allowing two PCs to share a single keyboard and mouse, to playing audio on your smartphone through your PC-connected speakers, to a simplified file synchronisation method between computers. 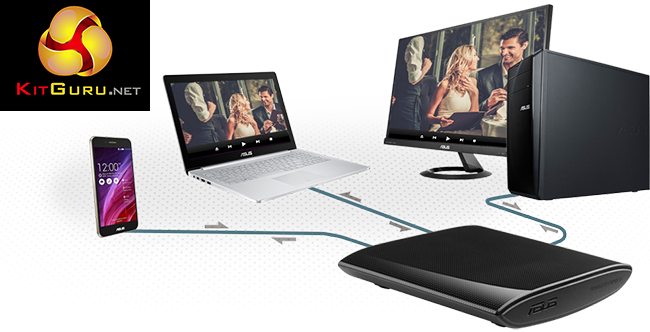 Asus calls the Transfer Express a “high speed interface sharing product that offers K.V.M.D.T. (Keyboard, Mouse, Video, Data, Touch) connection between two PCs” which also had capability for Android Open Accessory (AOA) 2.0 support. Based on those points, let's think of some of the potential usage scenarios for using the Transfer Express.

Imagine you work with a set of files at home on your desktop PC, you then transfer them to your laptop and edit them elsewhere, which leads you towards having to transfer them back in the opposite direction, making sure not to overwrite newer file versions or copy data in the wrong direction. Repeat this on a daily basis, with multiple sets of files for different purposes, and it's easy to see why maintaining control can become such a convoluted process.

What if you use important software and files on your employment/education laptop while at home, but want to make use of your gaming rig's set of high-resolution monitors in an extended or mirrored mode? It may not be as simple as connecting a HDMI cable from your laptop's single video connector (think multiple screens as well as G-Sync monitors with their single DisplayPort input).

Maybe your mobile device is your primary music player, but you want to play its audio through your powerful PC speakers, while maintaining Windows notification sounds. That could be something that people who use speakers built into their monitor will welcome, or even those who don't want the fuss of continuously switching between PC and handheld device speaker inputs.

Perhaps you have a large screen Android tablet for work/education, and have a lengthy document that needs to be typed. The Transfer Express can allow your keyboard and mouse to be used for full tablet functionality. On the topic of peripherals, maybe you (like myself) are constantly in command of two separate PCs and want to control them both with just one keyboard and mouse. Asus' Transfer Express can make that possible.

There are many feasible usage scenarios for the Asus Transfer Express, so we will be testing its capabilities and analysing its suitability and performance in such environments. 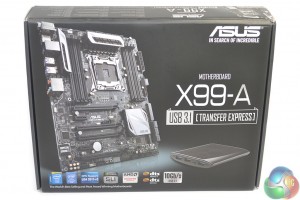 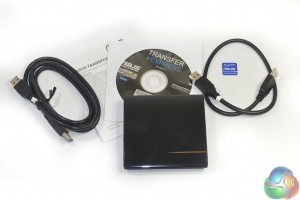 At this current point in time, Transfer Express is bundled with the X99-A/USB 3.1 motherboard. It is still early days for the accessory, so we expect Asus to widen its availability avenues if demand increases.

Edit: Asus tells us that Transfer Express is its own individual SKU which will be available alone. Maybe you have an older Asus motherboard that could use the kit, or a recent change in scenarios has now made Transfer Express a relevant solution for you. 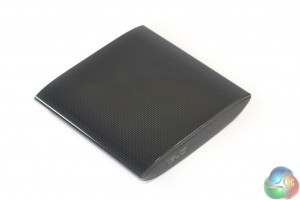 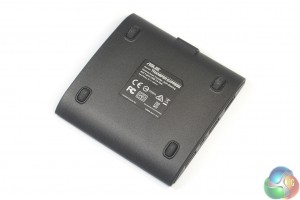 Asus gives the control hub a reflective black finish that is joined by a series of heightened dots. Its styling should make the Transfer Express control hub suitable for sitting on one's desk (unless you use primarily white hardware), although the plastic chassis retains fingerprints on its upper side with ease.

Four rubber feet on the unit's underside restrain movement and do a solid job at resisting pushing force. The tension applied by a USB 3.0 cable is unlikely to cause this unit to move by a significant amount.

I would have liked to see some form of magnetic base for physically attaching the device to one's PC. Like Asus does with its motherboards' wireless aerials, making the unit magnetic allows users to stick it to their metal chassis in a location that they define. 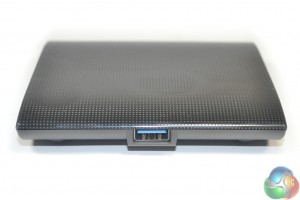 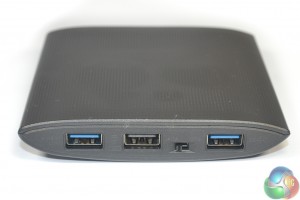 A single USB 3.0 port on the rear side acts as the direct connection to the primary PC. For Android usage, this is the port that you should connect to the PC whose keyboard and mouse you intend to employ.

Measuring 100(W) x 100(H) x 17(D) mm, the unit is about the same size as a DVD disk (obviously thicker). Those small dimensions allow it to fit comfortably in one's hand for portability purposes, while making it relatively simple to hide on a desk.