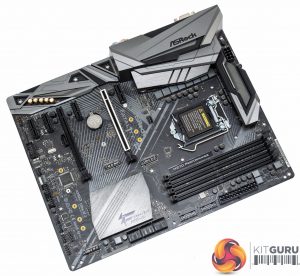 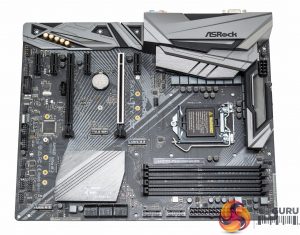 ASRock’s Fatal1ty H370 Performance uses a neutral colour palette of grey and black and sharp angular details to the heatsinks and shrouds. It was only as recent as the Fatal1ty motherboards of the Z270 generation that ASRock was still using a black and red colour scheme. 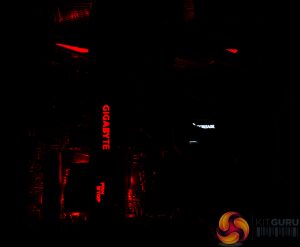 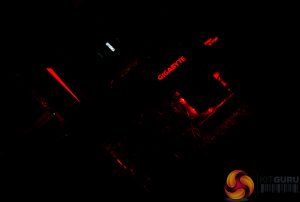 ASRock clusters three fan headers at the base of the motherboard along with two of the three RGB headers (one 12V G R B and one addressable). The second M.2 slot is located at the bottom of the motherboard and this slot supports up to 110mm drives, the longest M.2 form factor currently available.

The audio area has a unique plastic shroud covering it with the capacitors peeking through a gap, an innovative look that is typical of ASRock designs.

The rear I/O is well balanced in terms of audio, display and USB. ASRock also leaves in a blank mounting area for optional M.2 WiFi antennae. 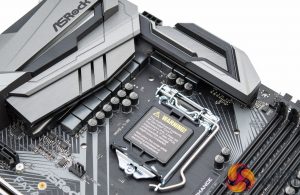 The CPU has chunky looking heatsinks though looks can be deceiving as a significant part of these is a plastic shroud, which is screwed onto the aluminium heatsink blocks.

Around the CPU socket are a couple of fan headers and the third and final RGB header (12V G R B). 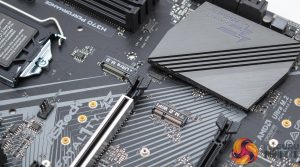 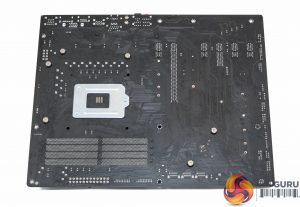 M.2 slot number one, which supports up to 80mm M.2 devices, is located next to the first PCIe lane while the optional M.2 slot for WiFi modules is sandwiched between the two full-size PCIe slots. If an optional PCIe module were to be installed a specific type would be required – an M.2 2230 WiFi card with Antennae on an extension cable that can be mounted in the rear I/O slot provided, similar to this example here.

Alternatively, the antenna cables (Mini PCI to RP-SMA male) and WiFi antennae (RP-SMA female) could be purchased separately keeping in mind a need for the cable to be of sufficient length to route to the rear I/O from this location. It is not made clear by ASRock if it will directly retail an optional WiFi module for users seeking to integrate WiFi into their motherboard.

Neither M.2 slot on this motherboard is cooled meaning most high-performance NVMe drives may throttle under heavy and sustained load.

The underside of the motherboard PCB is plain black and uses cross-head screws all over for easy disassembly, maintenance and repair. 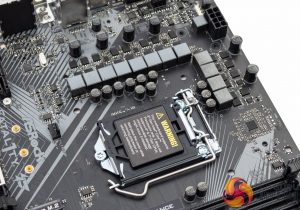 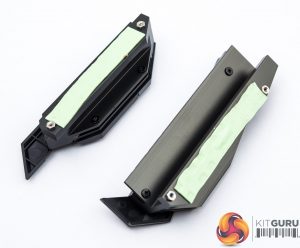 With the heatsinks removed the CPU power delivery system is completely visible. As mentioned those CPU VRM heatsinks, which use thermal pads to make contact with the VRMs, include plastic pieces separately screwed on for styling purposes. This gives the impression they are larger than they actually are, though they are still more than sufficient to deal with the heat output of a stock Intel Coffee Lake CPU keeping in mind H370 does not support overclocking. 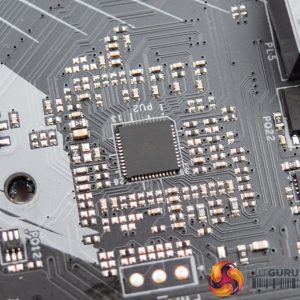 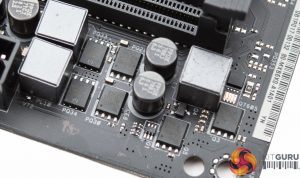 The CPU PWM controller is also a UPI unit and is marked uP9521p, but there is no information about this controller on the UPI website so it must be a new unit. ASRock claims a 10-phase power design for this motherboard and given the MOSFET drivers used it does seem to be an 8+2 virtual phase solution. That is 4+2 true phases controlled by the PWM controller with the four phases doubled to eight by the uP1961s doublers.

Combining the 8+2 phase solution controlled by the uP9521p and the two additional phases controlled by dual Richtek RT8120B controllers, the total solution is 8+2+1+1 likely in the format vCore, iGPU, VCCSA and VCCIO.

The memory VRM contains a number of NIKOS and sinopower MOSFETs, inductors similar to the CPU power delivery and is linked a Richtek RT8120B controller.

Underneath the rear I/O shroud is a separate PCB which mounts the LEDs and these connect into the motherboard through a 4 pin connection.

Underneath the shroud for the audio section there is a Realtek ALC1220 codec along with an NE5532 Texas Instruments headphone amplifier, the capacitors are Nichicon Fine Gold (FG) Series specifically for audio equipment and are rated for up to 85 degrees Celsius.