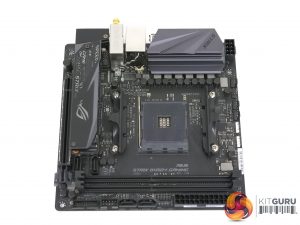 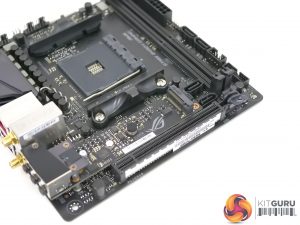 The aesthetic is typically plain given the limited space for styling flair on mini-ITX motherboards. There are two heatsinks, one which covers the CPU VRM and the other which covers the first M.2 slot, both feature the Strix and ROG branding. The overall colour scheme is a neutral black with some dark grey accenting.

As is to be expected for mini-ITX ASUS has implemented some creative engineering in order to fit everything in with a separate daughterboard that provides the audio, cooled M.2 slot and also doubles as the chipset heatsink. 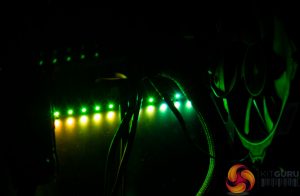 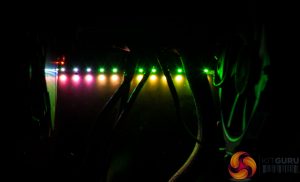 Onboard RGB lighting is provided in a single zone underneath the 24-pin edge of the motherboard. As an aside the ROG Strix X470-I Gaming gets an additional onboard lighting zone on the separate daughterboard.

It’s possible to expand on the default complement of RGB lighting with a 12v G R B strip and a 5v Digital strip, all of which are controlled using the provided ASUS AURA RGB software. 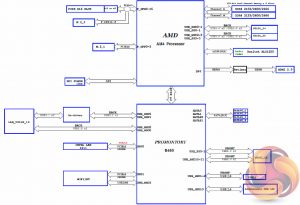 The block diagram provides a useful overview of how ASUS has provisioned available bandwidth from the CPU and B450 chipset. Interestingly, the second M.2 slot shares bandwidth with the only PCIe 3.0 slot on the motherboard, dropping that slot to X8 when the M.2 slot is in use. 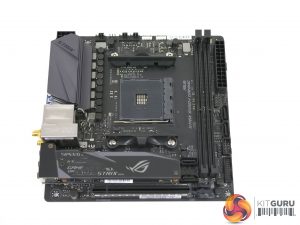 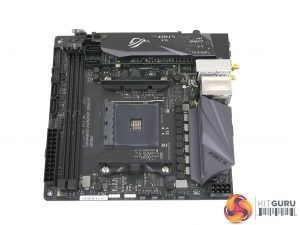 The onboard connectivity is tightly packed in, four SATA ports cluster around the bottom corner along with one USB 2.0 and one USB 3.0 header. 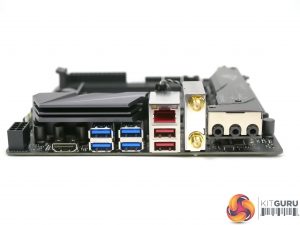 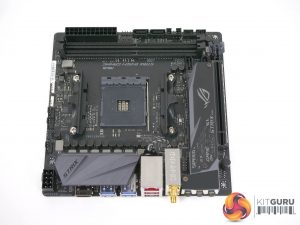 The rear I/O provides a reasonable selection – six USB (4 USB 3.0 and 2 USB 3.1), one HDMI 2.0, the WiFi antennae ports and three LED-lit audio jacks. There is no USB 3.1 Type-C which may put some potential buyers off.

The onboard WiFi and Bluetooth is based on the Realtek 8822BE chip and provides 802.11ac WiFi up to 867Mbps with MU-MIMO support on 2 transmitters and 2 receivers, as well as Bluetooth v4.1. 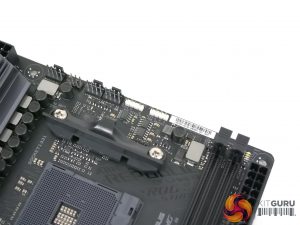 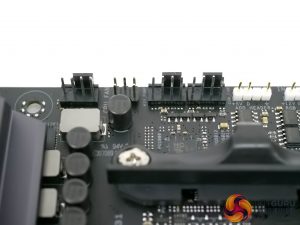 Around the CPU socket is a trio of fan headers (CPU/AIO/CHA) and a pair of RGB Headers (12v, 5v). 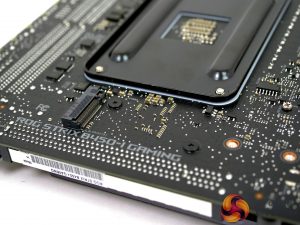 The second M.2 slot, which shares its bandwidth with the primary x16 PCIe slot, is found underneath the motherboard, Due to the compact nature of the mini-ITX form factor up to 80mm drives are supported in both slots, no 110mm support. 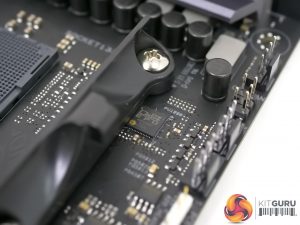 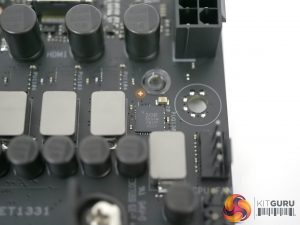 The CPU PWM controller is the ASUS DIGI+ VRM package marked ASP1405I, widely understood to be the International Rectifier IR35201. On this motherboard it operates as 6+1 phases with six phases for the CPU and one phase for the SOC. 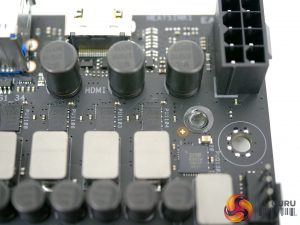 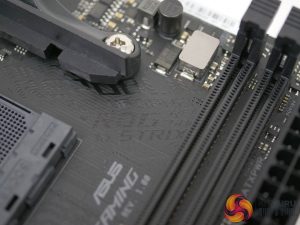 The six CPU phases are using IR3553M MOSFETs, which are capable of 40A, and the single SOC phase is using an IR3555M MOSFET capable of 60A.

Overall the CPU VRM is high quality and more than capable of handling the top Ryzen 7 CPUs. The primary concern seems to be the fact the SOC power, important for delivering power to APU integrated graphics, is only a single phase and features no heatsink cooling unlike the other six phases. Perhaps this motherboard is not the best choice for an APU build, particularly if the intention is to overclock the GPU component quite aggressively.

Recently we reported that Valve were shifting their focus from VR to the Steam Deck, …