The ASUS ROG STRIX X99 Gaming definitely has a unique look to it, though it’s lacking some pizzazz when you compare it to the new Rampage V Edition 10. Nonetheless, it still looks like a premium design and is a clear ROG product. Black is the majority colour of the design but there is a splash of red on the chipset heatsink and rear I/O shield. Within the packaging ASUS also include a few different variations of these stickers to change that colour scheme. 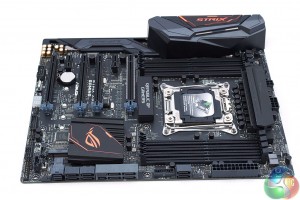 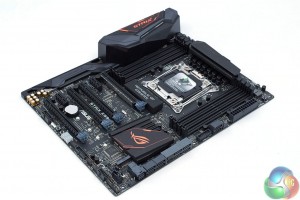 The overall layout is geared towards up to 3-Way GPU setups, while the Rampage V Edition 10 will support 4-Way. In reality, 3-Way is still plenty for even the most premium system – especially as Nvidia has recently distanced itself from 3- and 4-way SLI setups with the GTX 1070 and 1080.

As with any other X99 motherboard (except maybe the ASRock mini-ITX model) there is quad-channel memory support up to 128GB. ASUS has certified speeds up to 3,333MHz, but going further shouldn’t be an issue with overclocking. ASUS also provides the MemOK! button with this motherboard, helpful if you encounter POST issues related to your memory. 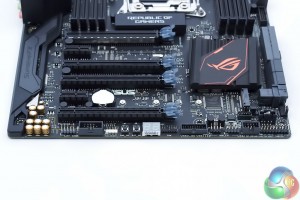 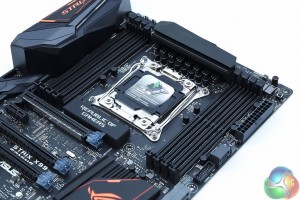 The CPU socket sports an 8-phase all-digital VRM system and can take power through an 8pin as well as an additional 4 pin. Even with Broadwell-E you’re unlikely to need the extra 4-pin given an 8-pin can supply upwards of around 300-watts. Nonetheless, under watercooling with extremely high overclocks applied to the cores and cache – it is possible the extra power may come in handy for stability and power-smoothing purposes. 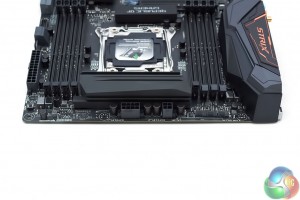 Along the side of the motherboard is a plethora of storage connectivity – 10 SATA 6Gbps, U.2 and a USB 3.0 header. There’s an M.2 socket placed next to the chipset heatsink as  well, and another USB 3.0 header and USB 2.0 header for further I/O options.

The rear I/O is jam-packed with ports too: 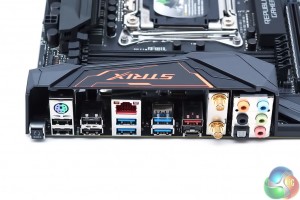 While the second full-size PCIe slot is wired to 8X it only operates at X4 and it also shares bandwidth with the second PCIe 1X slot and the USB 3.1 controller. ASUS claims that by default PCIE X4_1 operates at X1 to optimise lane allocation, you can change this in the UEFI but at the detriment to the other interconnects. 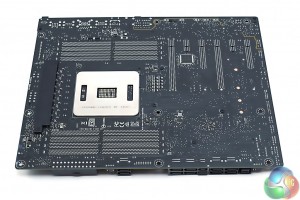 For this review we paired the ASUS ROG STRIX X99 Gaming with some of Corsair’s custom ROG-themed Dominator Platinum DDR4 memory. Skinned in red and with an ROG logo it’s a high performance memory kit specifically designed for use with ASUS ROG DDR4 motherboards. The inclusion of customisable RGB lighting across the top bar of the memory kit pairs well with the RGB customisation of this motherboard and it offers a nice, albeit pricey, way of coordinating your build. 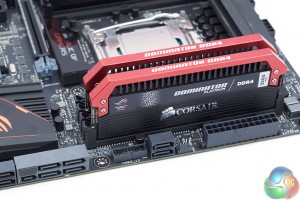 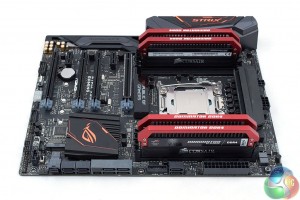