The highlights of the ASUS software package for this motherboard are arguably the Turbo App and Aura. The Turbo App allows you to pick an application and give it priority on the faster clocked “golden core”. We ran a few tests to see how this worked, using Cinebench R15’s single core test.

We left everything on auto but set our golden core, Core #9, to 4GHz, the other cores would only Turbo to 3.5GHz. 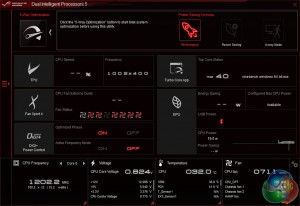 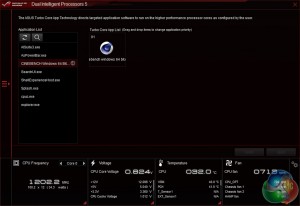 Without the Turbo App setup the single core load would jump around randomly across various cores and would operate at the maximum frequency for that core – with no preference for the golden core. However, enabling the Turbo App meant that the workload fixed to the golden core for the entire duration of Cinebench running.

It didn’t, however, assign itself to the golden 4GHz core straight away. The load from running the Cinebench R15 single core test randomly jumped cores but the first time it arrived at Core #9 it then stayed there for the rest of the workload. 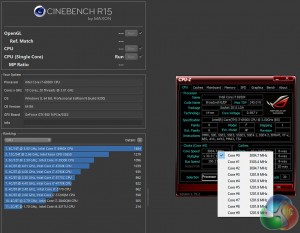 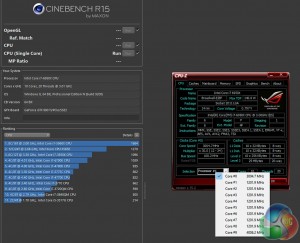 Aura is the new ASUS software intended to control the RGB functionality of the motherboard, and other compatible products (like graphics card). There will likely be Aura RGB peripherals coming in the future if market trends are anything to go by .

Our experiences with the software were off to a somewhat poor start. We run an ASUS PB287Q 4K UHD monitor and the Aura software doesn’t cope with Windows DPI scaling at all, as shown below. 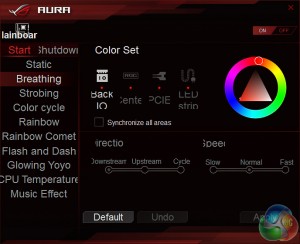 We changed the resolution to continue using the software but ASUS should get such a lazy oversight fixed as a priority. Especially as Aura is present on only high-end products right now – the market where customers are most likely to be using high-resolution panels.

The software is simple but functional: you can assign colours independently to four different areas (including an optional RGB header) and choose from a number of lighting patterns. It’s also possible to have different colours and settings for when the system is shut down as it is when the system is on.

We were a little perplexed that the red and green LED lights for the Power and Reset button remain on at all times. Perhaps ASUS should allow these to be turned off, or should turn them off automatically after the POST procedure is complete as these can interrupt the overall colour theme. 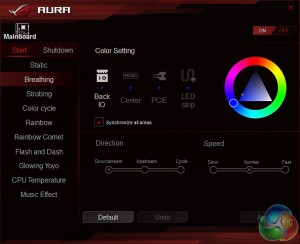 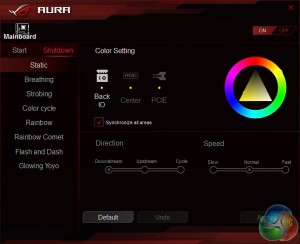