MSI's Z170A Tomahawk is definitely a unique looking motherboard, it's great to see MSI differentiate itself in a market that's tended to lean towards copycat styling, particularly at this price point. The layout is quite different to any other motherboards we've seen – in some good ways and others not so good that we'll elaborate on as we progress.

The build quality of the Z170A Tomahawk is strikingly good, not only does the matte black finish and general styling reach to a much higher price point, the fact all the heatsinks are screwed in means the board is solid – there are no “wobbly bits” to speak of. 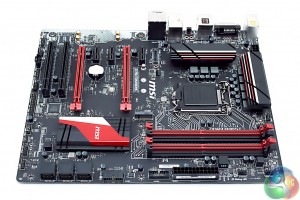 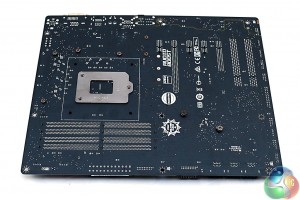 Alongside the memory slots you'll helpfully find debug LEDs, three fan headers (2 CPU, 1 SYS) and two USB 3.0 headers. Strangely, one is right-angled and the other is not which works in that the USB 3.0 headers match the orientation of what's next to them, but why not just make everything right-angled for consistency?

For reference, there are two more SYS fan headers, one at the middle of the board and the other near the lowermost PCI slot.

MSI provides six SATA ports, the eagle-eyed will notice SATA Express isn't present at all – while it might be easy to mark the Tomahawk down for not having this the limited uses for SATA Express mean most users won't miss it in the slightest.

That said SATA Express is still something most rival motherboards have so we do ponder the logic behind MSI's decision to remove it, especially as it's unlikely to add cost to the motherboard due to it being integrated into the chipset. 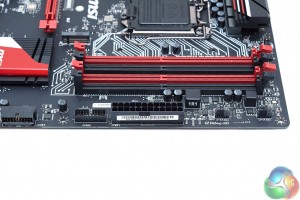 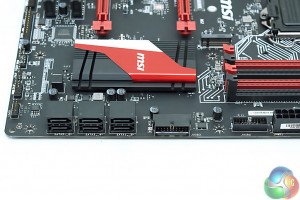 The PCI layout is unique, two legacy PCI and three PCIe 1X slots. We're not entirely sure as to the benefit of legacy PCI but given the basic audio and network controllers used some legacy PCI audio or networking cards could still be a better choice.

The primary PCI 16X lanes are officially 16X/4X but we've noticed the 4X slot is wired to 8X. In theory, SLI could work even if it's not certified to but it depends on how the motherboard handles PCIe lane allocation when slots are populated, and how this bandwidth is shared with other controllers and devices.

Below the PCI slots you'll find a long line of connectors including the front panel connectors, a single USB 2.0 header as well as some old-school connectivity like a parallel port and serial port.

The audio section makes use of an isolated PCB but looks a bit sparse compared to other Gaming motherboards – there are just 4 Chemicon audio capacitors, we couldn't spot an operational amplifier and the audio codec is Realtek ALC897 with no shielding.

For reference, Gigabyte's Z170-Gaming K3 has 7 Chemicon capacitors, a Texas Instruments operational amplifier and the superior Realtek ALC1150 codec with shielding. Just how much difference this makes is something we'll test later in the RightMark audio benchmark. 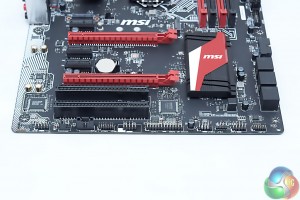 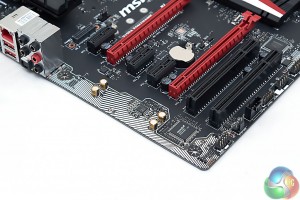 Around the CPU socket MSI implements an 8 phase VRM which is standard for the price point, we have no doubt this will be enough to push our Skylake CPU as far as it can go. MSI fits in two M.2 ports next to the CPU socket – the main one will support NVMe or SATA storage drives up to 2280. 22110 drives are not supported due to a PCIe 1X slot being in the way but for now 2280 includes all consumer M.2 drives including the Samsung 950 Pro.

It should also be noted that M2 slot 1, which supports the SATA or NVMe M.2 drives, shares bandwidth with SATA ports 5 + 6. Next to that PCIe 1X slot you'll find a second vertically mounted M.2 slot, intended for Bluetooth and Wireless combo cards.

Naturally, these combo cards don't come as standard with the board due to its aggressive pricing but you can pick one up separately, MSI even leaves vacant screw holes in the rear I/O to screw in the antennae mounts. 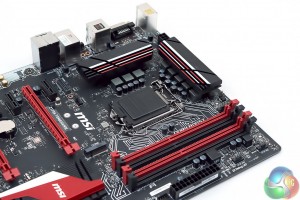 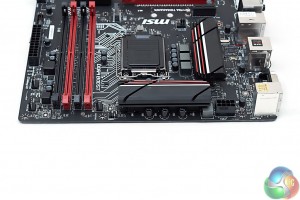 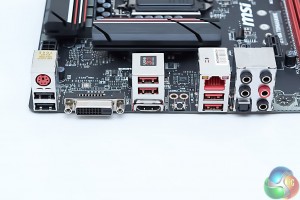 To add a little extra “bling” MSI provides a rear I/O clear CMOS button and behind that, as previously noted, are screw holes to mount an optional Bluetooth/WiFi combo card.