Kingston is one of the biggest SSD and storage manufacturers in the world, but it may surprise you to learn the company is yet to release a PCIe 4.0 NVMe SSD. That is set to change however, as Kingston's NVMe SSD roadmap was announced today at CES 2021.

The biggest piece of news from this roadmap is the announcement of Ghost Tree, the name given to Kingston's upcoming PCIe 4.0 SSD. The company says it is targeting speeds of ‘7000MB/s read and write' with its Ghost Tree lineup, with capacities ranging between 1-4TB. If Kingston can deliver on its claims, that would put Ghost Tree right up there with the likes of the WD SN850 and Samsung 980 Pro. 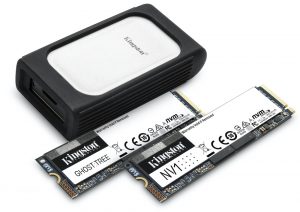 We also got updates on three other product lines from Kingston, including the NV series, which is set to get a new iteration that Kingston claims will be an ‘ideal entry-level drive for first-time NVMe users with capacities up to 2TB.' Additionally, the company also unveiled the XS2000, a USB 3.2 Gen 2 x2 external drive rated up to 2000MB/s, with capacities of 500GB up to 2TB.

Lastly, Kingston has also updated the trusty data-centre DC1000M SSD, which we reviewed last year. The new model the DC1500M, adds ‘support for multi-namespaces', and Kingston says it is ‘designed to support a wide range of data-intensive workloads including cloud computing, web hosting and virtual infrastructures.'

KitGuru says: It'll be fascinating to see how Ghost Tree can rival the existing stack of PCIe 4.0 drives, from the likes of WD, Samsung and Sabrent.