Crucial once reigned supreme in the entry-level SSD market segment but this a segment that has become ferociously competitive so to give the Crucial BX500 a fighting chance, Crucial have gone all out to keep the cost of building the drive as low as possible. It’s a DRAM-less design which saves money but at the expense of some performance and it is housed in a thin plastic chassis, not the usual metal one. 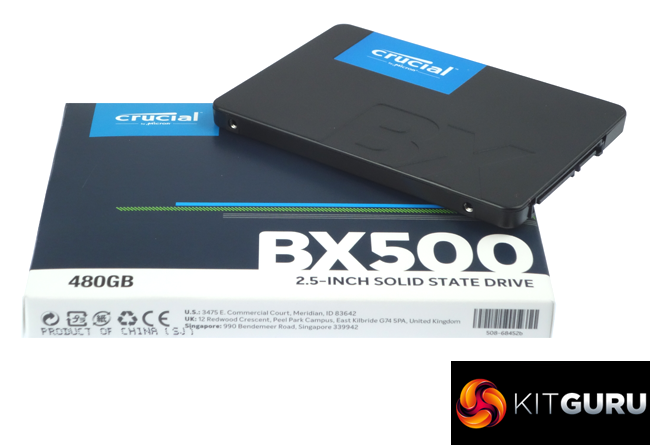 The drive uses Silicon Motion’s SM2258XT four channel controller which has been designed to work with DRAM-less SSD designs in combination with Micron’s own 64-layer 3D TLC NAND.

To try and get over some of the write performance issues with DRAM-less designs the BX500 uses Crucial’s Dynamic Write Acceleration technology. DWA technology allows a SSD controller to dynamically switch Flash modes from, in this case from TLC to SLC and back again.

Crucial have only released sequential performance figures for the BX500 series and they are what you would expect from a SATA based drive with 3D TLC NAND and a four channel controller; up to 540 MB/s reads and 500 MB/s for writes for all three drives in the product line. Testing the drive with the ATTO benchmark we squeezed a bit more Sequential performance out of the 480GB drive, getting a read figure if 561 MB/s while writes achieved 512 MB/s.

Even though Crucial have given the 480GB BX500 a competitive price tag of around £70 when launched, it still would benefit from a price reduction. This particular market segment has better performing drives including the 480GB version of Toshiba’s TR200 and even Crucial’s own 500GB MX500 which is only a fiver more expensive and is not only faster, it comes with a five year warranty.

Kitguru says: If you are on a very tight budget and need a 480GB SSD then Crucial’s BX500 is an obvious choice but and it’s a big but, there are much better-performing drives on the market for not very much more money including one from Crucial themselves.