We initially looked at the ‘plain jane’ Patriot Viper VPN100 a while back, now we have our hands on the ‘blinged’ up version of the drive in the shape of the RGB-equipped Viper VPR100. Interestingly, Patriot says that with the RGB mode switched on, performance may ‘decrease up to 20-30%’ so we put that to the test. 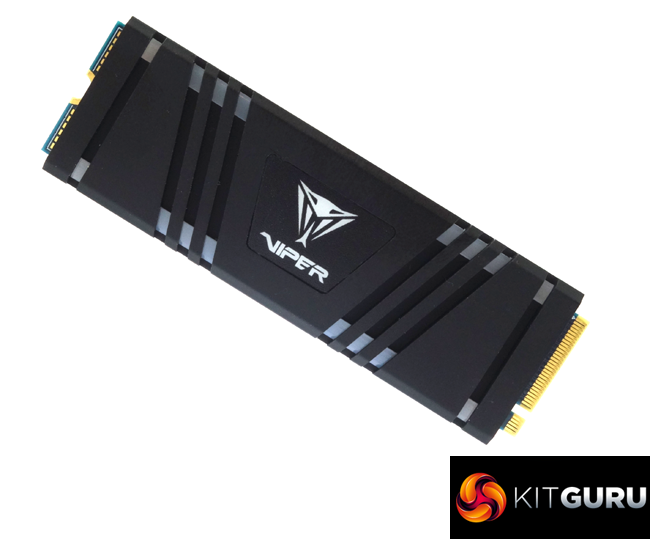 As with the Viper VPN100 model line-up, the VPR100 RGB range consists of four capacities, the entry 256GB model, 512GB, 1TB (the drive we are looking at here) and a flagship 2TB drive. Gone is the massive passive cooler that the VPN100 used, in its place is a lower profile (7mm compared to 10.5mm) but very slightly wider (25mm versus 22mm) RGB equipped passive heatsink.

Just like the VPN100, the VPR100 is built around a Phison PS5012-E12 controller and Toshiba 3D TLC NAND. The PS5012-E12 is Phison’s second-generation PCIe Gen3 x4 NVMe controller. The 8-channel controller is built on a TSMC 28nm process and has been designed to work with TLC and QLC NAND technologies with support for Phison’s SmartECC and the latest LDPC (Low-Density Parity Check) error correction as well as AES256, TCG OPAL and TCG Pyrite hardware encryption support. With 8 NAND channels and 32 NAND chip enable lines, the maximum amount of NAND the controller can support is 8TB.

Patriot quotes Sequential performance figures on the specification sheet for the 1TB drive as up to 3,900MB/s for reads and up to 2,900MB/s for writes using the CrystalDiskMark benchmark. Also quoted are Sequential performance figures using the ATTO benchmark with the same maximum 2,900MB/s write score but with a reduced read score of 3,300MB/s, and its these two ATTO figures that appear on the box that the drive comes in.

The quoted 4K random read/write figures for the 1TB are very impressive at up to 700,000 IOPS for both reads and up to 650,000 IOPS for writes. Looking at the specification sheet for the VPR100 you come across an interesting caveat to those figures, in that if the RGB mode is switched on, quote “RGB sync may decrease up to 20-30% Read/Write speed” unquote. But more on that later.

The 1TB VPN100’s endurance is rated at 1600TB TBW and Patriot backs the drive with a 5-year warranty.