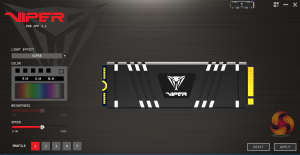 Patriot’s Viper RGB APP (v2.1) software controls the VPR100’s lightening effects. The control panel may look a bit basic but it does allow a host of options to be changed. There are eight standard effects including a Dark mode that switches the RGB off; the other seven are: Viper (the default option out of the box), Breathing, Heartbeat, Marquee, Raindrop, Aurora and Neon. You can see each of these in our demo video below:

It also allows the colour of the five lighting zones to be changed as well as the speed and brightness of the effects. It also can be controlled by the motherboard’s RGB software. The VPR100 is compatible with ASRock’s Polychrome Sync, ASUS AURA Sync, Gigabyte RGB Fusion and MSI’s Mystic Light Sync. 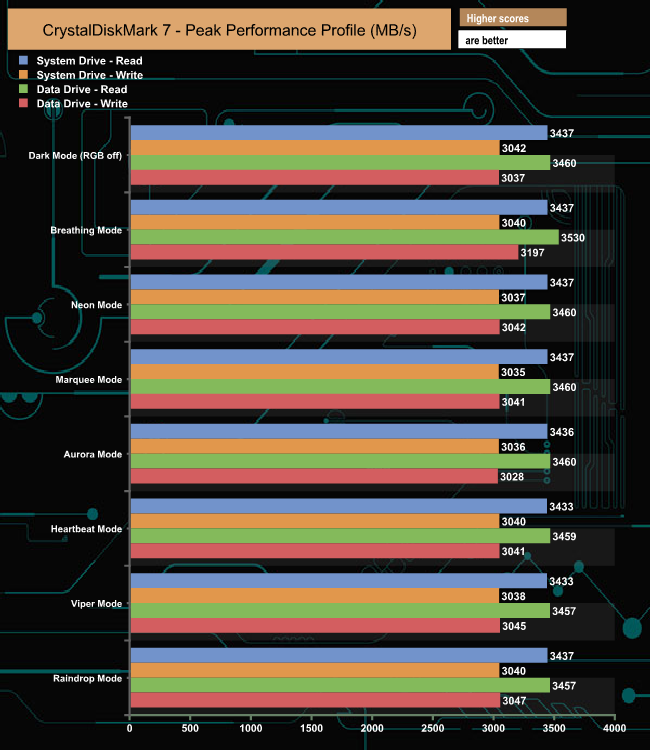 Now back to that “RGB sync may decrease up to 20-30% Read/Write speed” quote in the spec sheet. We tested the drive (both as a Windows 10 system disk and as a secondary data disk) in all eight integrated modes with Crystal Disk Mark 7’s Peak Performance test to push the drive hard, and saw hardly any movement in the Sequential read/write figures.

We then tested the drive in the two RGB equipped motherboards we use for testing, the ASUS Prime Z270-A with ASUS AURA RGB and the MSI MPG X570 Gaming Edge Wifi supporting MSI’s Mystic Light RGB. Again we tested with Crystal Disk Mark 7’s Peak Performance test with the RGB modes kept at default settings and used the average MB/s of five test runs. 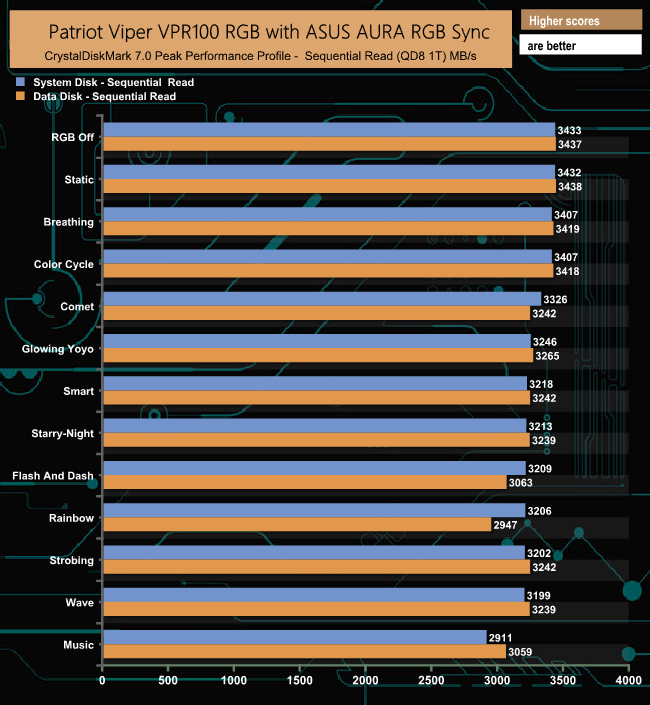 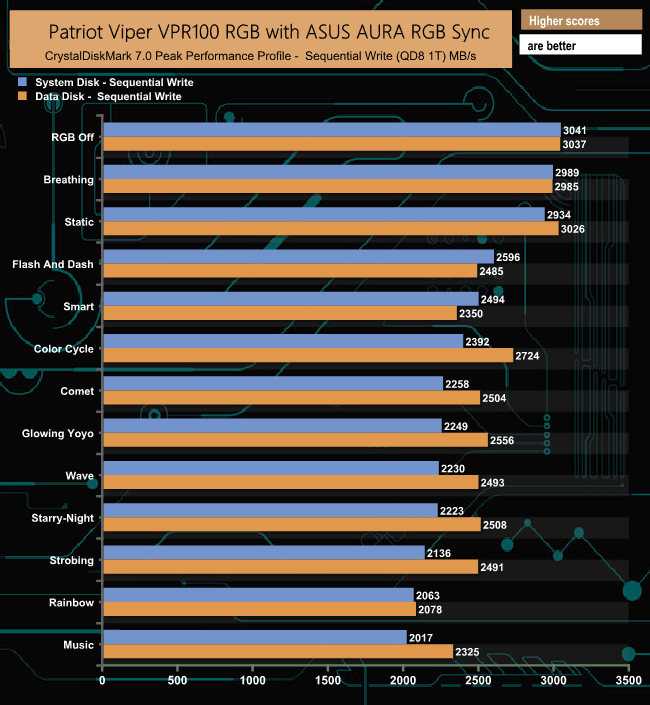 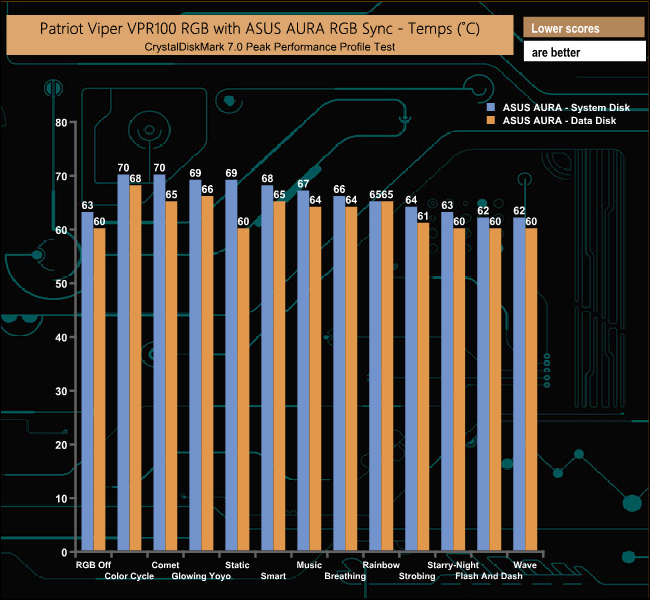 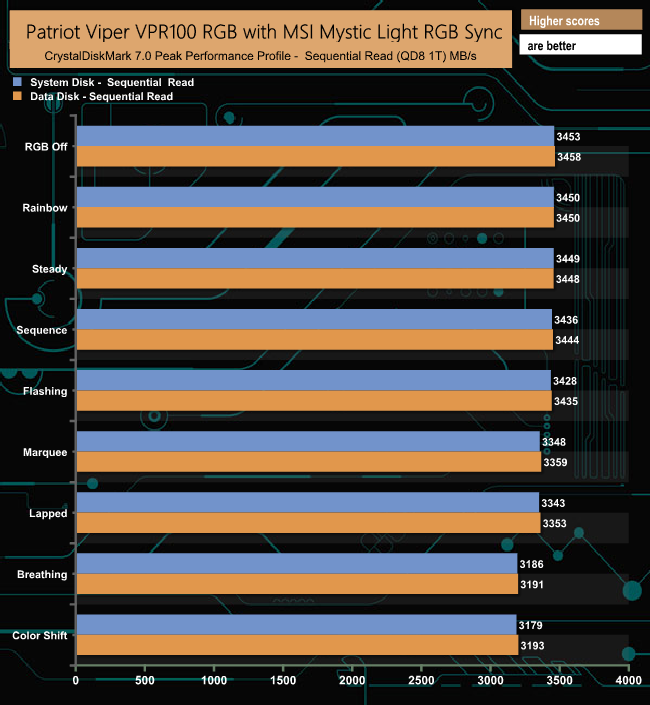 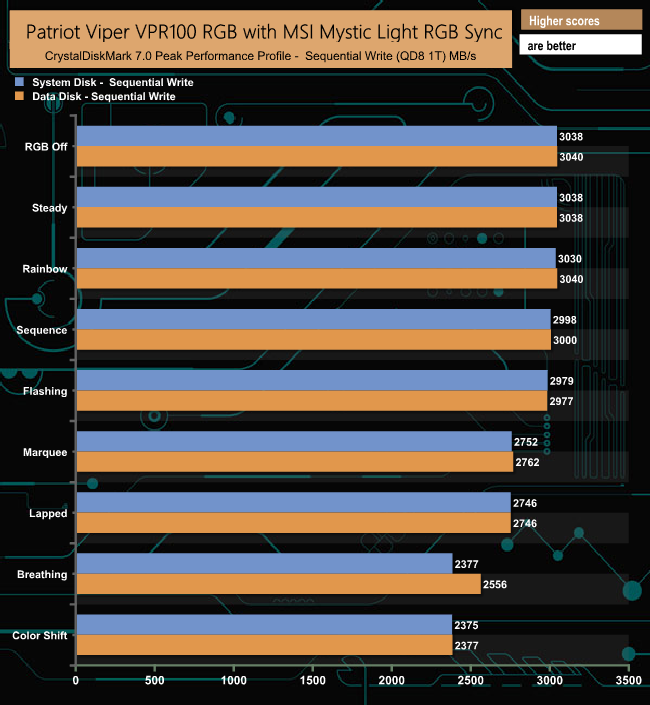 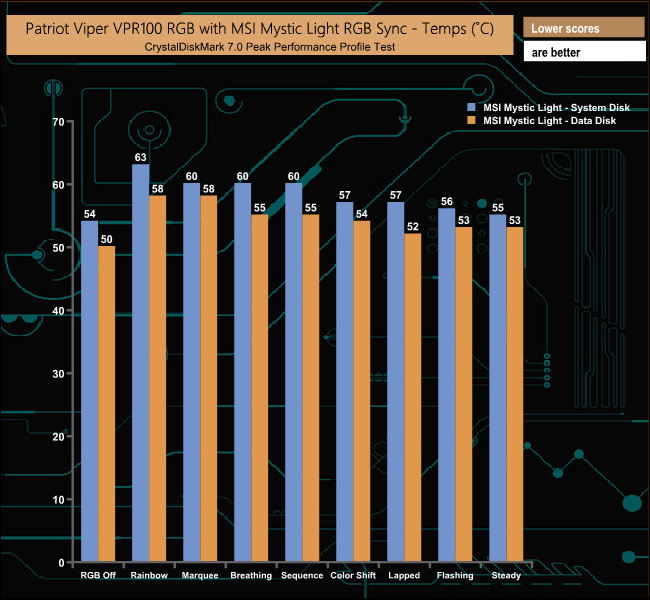 Looking at the temperature readings for the drive during these RGB test runs, the drive does get a little toasty, but not enough to start throttling back to cause the performance issues we saw. In any case, some of the largest drops are where the drive is running slightly cooler than other RGB modes.

Although the ASUS and MSI boards are using different chipsets, with the RGB turned off on the VPR100 there’s not much difference in Sequential performance between them.

The problem appears to be that by controlling some of these RGB effects and being pushed hard, particularly when in write mode, is overwhelming the Phison PS5012-E12 controller to such an extent, that the performance is being compromised. The VPR100 seems to have more problems dealing with the RGB options in the ASUS AURA RGB than the MSI Mystic Light choices, but that’s not to say that it doesn’t suffer a significant drop in performance in a couple of the Mystic Light modes.