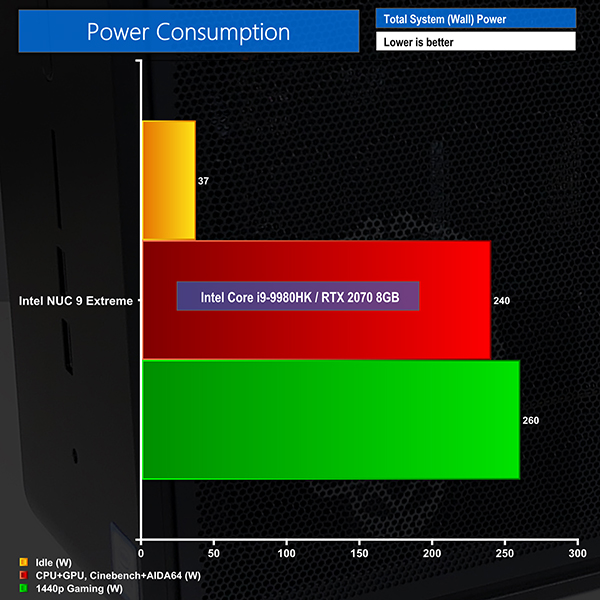 Idle power consumption is impressively low at less than 40W from the wall.

Ramp up the CPU-only load and you’ll bounce to 140W system power for the short duration boost before stabilising to around 105W from the wall for the sustained boost frequency and operation.

Stressing both the CPU using Cinebench and the GPU using AIDA64 nets 240W system-wide power draw from the wall for the sustained loading. This is a little on the low side of our pre-testing estimates as the roughly 30W background system draw, plus 65W CPU plus 175W graphics card should have resulted in around 270W total. The key difference is that AIDA64 was not pushing the graphics card to its full 175W board power limit – it ran at 145W in the stress test situation.

Gaming at 1440P finally sees the graphics card topping out at 175W board power at default clocks, so we see 260W system-wide power draw when running RDR2. The CPU has around 20W further headroom to push its power draw and clocks if we had a beefier GPU with higher frame rates in the future.

The peak power draw that we observed from the system was around 310-330W when the system was running at maximum graphics card load with the CPU in its short duration turbo state of 107W. You could add a reasonable amount of additional power onto the peak if you had peripherals such as Thunderbolt and USB devices running alongside heavy SSD loads.

Whichever way you look at it, the 500W 80-Plus Platinum PSU looks to be ample for the configuration that we tested and there’s headroom for pushing things further via overclocking or a future graphics card upgrade.

We use the same test procedure to record system temperatures. Ambient temperature during the readings was 23-25C. 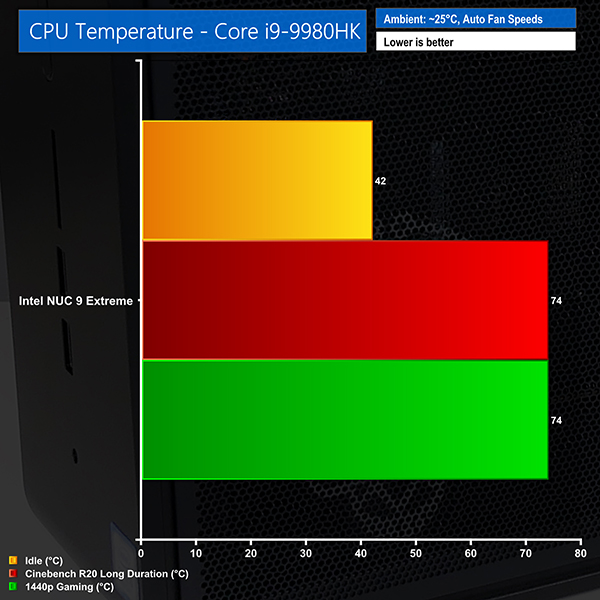 The CPU stayed well cooled at idle despite running at minimal and even passive chassis fan speeds, based on the ‘Cool’ profile from the UEFI.

Applying a light load will see the temperatures for the CPU ramp up to the mid-80s very quickly in line with the 107W short duration/burst package power allowance. This falls in place to a far more tolerable mid-70s sustained temperature once the fans kick in appropriately and the chip is running 65W power draw.

The influence of heat from the graphics card did not result in notably higher temps from the CPU. Of course, this is also influenced by the increased fan speed for the chassis fans and the lower CPU package power delivery as the chip is under less load in games

Cooling is very good using the ‘Cool’ UEFI profile that we tested with. There is no cause for concern and at no point did we ever see numbers close to the worrying 99C mark where thermal throttling starts to kick in. Of course, this can be tweaked very easily and successfully to an individual’s preference.

We did, however, notice that the chassis fans would spin up before their UEFI-designated temperature target, so perhaps they’re also reading data from other sensors or hardware than what is displayed for the CPU readings via OS monitoring tools. 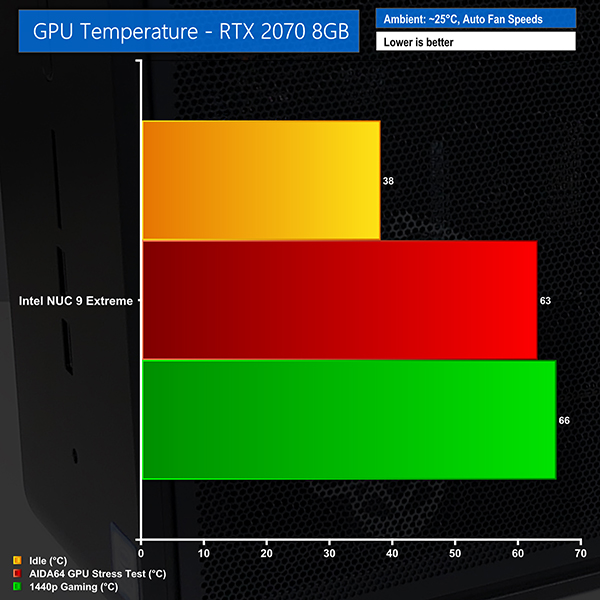 0 RPM fan mode was no problem for the ASUS RTX 2070 Mini graphics card as it stayed around the 40C level when idling.

The GPU stress test pushed temperatures up to the mid-60s and this was when the board power draw was around 145W. Fan speed during this test was 2300 RPM with clocks at 1860MHz

Upping the ante to 1440P gaming pushed the graphics card temperature higher to 66C. Core clocks were slightly lower at 1830-1845MHz, so there is potentially room to push harder if you overclock via power limits on fan curves. This GPU temperature increase was driven by the increased board power usage to 175W and the minimal increase in fan speed. In fact, it took consecutive 3DMark Fire Strike Stress Test runs to push the graphics card fan speed as high as 84%.

Of course, graphics card temperature dynamics will be primarily influenced by your individual choice of card.

Noise levels are what I would describe as ‘OK’ overall.

At idle, the fans for the chassis and graphics card are often passive, so no complaints there. The chassis fans do, however, spin up quite aggressively when any form of even light CPU load is applied such is the power limit and clock speeds of the Core i9 CPU.

This can be tweaked in the UEFI. While the fan speed hysteresis is good, it is certainly not the best we have come across. These quick changes in fan speed are annoying and are more noticeable than constant fan speeds, even at a higher level.

The fans are audible and fairly loud when the CPU operates at its short duration 107W package power level. The fans respond quickly to the increase in power load on the chip but they also drop the spin rate quickly when the lower long duration power limit of 65W kicks in. At 65W sustained CPU power, the fans are perfectly fine. Not silent, but not obtrusive.

Of course, CPU+GPU load depends on the graphics card that you use, but we had no major complaints with our test configuration. The system is audible but not overly loud given the level of hardware crammed into the tiny 5L chassis.

Overall, I was perfectly happy with the noise levels in a variety of situations, especially for the peak noise at full load. With that said, the rapid cycling of the fans when light CPU loading is applied, such as launching web browsers or opening programmes is annoying.

I would manually tune the fan speed curve to let the CPU run a little hotter in its short duration burst power state knowing that it will quickly drop in temperature when reduced to 65W long duration power mode.

For noise performance, check out the video review where we show the system running under different loading scenarios.