Image upscaling techniques have come to the forefront of gaming over the last few years. On PC, Nvidia's DLSS technology arrived as a key feature for RTX GPUs, while earlier this year AMD released FidelityFX SuperResolution (FSR). Today we back with Team Green, as Nvidia has announced a new driver-level image scaling feature designed to work in all games, with GPUs as old as the Maxwell architecture.

For clarity's sake, Nvidia has already offered an image scaling feature for a couple of years now, accessible within its control panel. I'm not sure how many people knew about this however, and today the upscaling algorithm itself has been updated. Nvidia Image Scaling (NIS) can now be enabled from within GeForce Experience, too, making it easier than ever to boost frame rates. 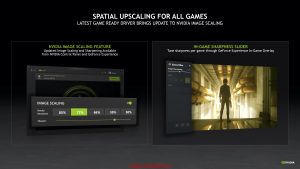 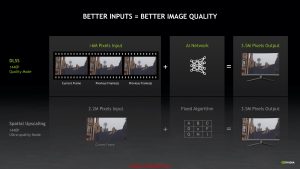 The technology itself is not dissimilar to AMD FSR. Both are spatial upscalers which render your game at a lower internal resolution before upscaling and sharpening, with the final output displayed at your monitor's native resolution. The key difference is that FSR requires specific integration within a game, whereas NIS is a driver-level feature, so it is enabled from within the Nvidia control panel or GeForce Experience.

That does have a couple of implications for when you open your games. The first is that absolutely everything on screen is going to be rendered at a lower resolution, upscaled and sharpened – including the HUD, subtitles and other UI elements. A game with DLSS or FSR, features that require integration, doesn't upscale these elements, giving a slightly sharper presentation for the in-game UI.

However, if you enable NIS from within the Nvidia control panel, you will need to manually set your in-game resolution to lower than native. It is definitely a bit more fiddly, with more potential for things to go wrong than specific game integration as we see with FSR, but for peace of mind Nvidia does give you option to enable an overlay in the top left corner, with the acronym ‘NIS' appearing in green text to let you know everything is being upscaled and sharpened correctly. 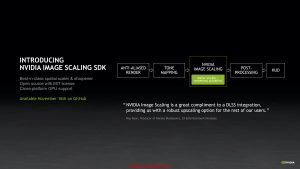 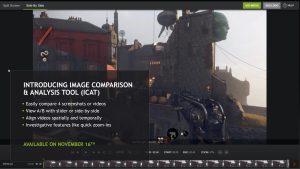 Nvidia is also launching an open-source cross-platform SDK for NIS today, available on GitHub, so developers can integrate NIS directly within a game if they choose, but for all of our testing today we have assessed NIS as a driver-level feature. AMD GPUs will be compatible with games that implement the NIS SDK, but you need a Nvidia GPU (Maxwell or newer) to access NIS from within the control panel or GeForce Experience.

For our testing today, we are looking at the image quality of NIS versus native resolution, FSR and DLSS in three games – Necromunda: Hired Gun, Deathloop, and F1 2021. For all of the comparisons shown in the video, we are using a new tool from Nvidia known as ICAT, the Image Comparison & Analysis Tool. This is a great piece of software, available free of charge, that lets you compare different screenshots or game capture side by side.

That’s it for this brief explainer though, and be sure to watch the video above for all the side-by-side image quality comparisons and the performance numbers!

KitGuru says: Let us know if you would be happy to enable NIS in-game, and what render scale you would opt for.

Previous New COD anti-cheat will ban cheaters from ‘past, present and future’ games in the series
Next Kolink launches Big Chungus Shredded and Hench cases