Microsoft Corp. this week revealed that the launch timeframe of its next-generation Windows 10 operating system had been delayed to “late summer – early fall” of 2015. Previously it was believed that the OS was due in the first half of next year, but due to some reasons the software giant decided to push the release back. The company is still on-track to show off consumer features of Windows early in 2015.

“The thing I want to tell you about on Windows 10 is in the Windows 10 timeframe, which we plan to talk about the end-user consumer experiences in the early spring, we'll have a developer preview and be able to talk to that in depth in the early summer timeframe,” said Kevin Turner, chief operating officer of Microsoft at the Credit Suisse 18th Annual Technology Conference. “Then by next late summer and early fall we'll be able to bring out this particular OS. That's the current plan of record.”

The first rumours about Microsoft’s operating system code-named “Threshold” emerged in late 2013. In early 2014 it transpired that the world’s largest software designer was hard at work to release the new OS as early as in late 2014 in a bid to boost sales of PCs hampered by low popularity of Windows 8. Eventually different sources pointed to the first half of 2015 as the ship target for the next Windows, but it turns out that Microsoft’s new OS will only hit the market in late summer or early fall of 2015, roughly three years after Windows 8. 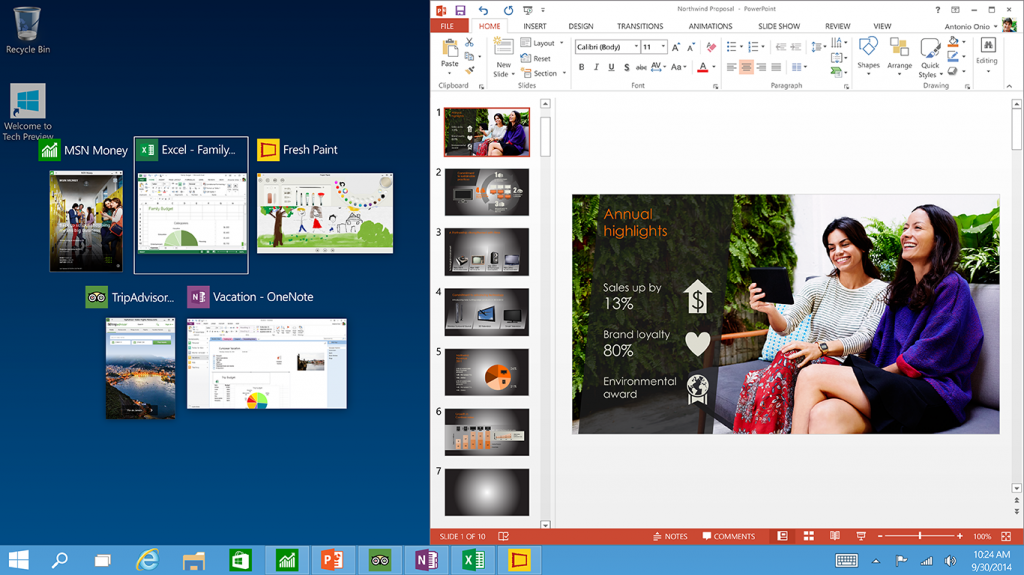 Based on unofficial information, Microsoft will publicly preview consumer features of Windows 10 at a special event in late January. According to a report by Mary J. Foley, a well-known Microsoft watcher, the software giant will unveil capabilities of Windows 10 for mobile devices, which will work on smartphones as well as tablets powered by ARM or Intel microprocessors. It is expected that Microsoft will show its new code-named “Continuum” touch-based user interface at the event.

Microsoft Windows 10 will power virtually all types of devices that exist today, including desktop and notebook PCs, hybrid 2-in-1 systems, tablets, smartphones and even certain embedded applications. The OS will intelligently tweak its user interface for every device type. Many of “classic” Windows elements are expected to return to Windows 10 versions for desktops and notebooks. The next Microsoft operating system will ship with cross-platform DirectX 12 application programming interface.

KitGuru Says: Microsoft Windows 10 is highly anticipated by PC makers and hardware components manufacturers because they hope that its release will improve their sales. Unfortunately for them, the new OS will not be available for quite some time from now, which means that spring refresh and even back-to-school PCs will have to ship with Windows 8.1.

Previous Phison: 256GB SSDs could replace HDDs in notebooks in 2015 – 2016
Next TAG Heuer’s smartwatch to feature Intel chip inside – report