The new MacBook Air and MacBook Pro laptops from Apple use custom M.2 SSDs from Samsung marked as MZ-JPV128R/0A2, according to iFixit. The drives are based on the Samsung S4LN058A01 PCIe 3.0 x4 AHCI controller as well as Samsung K9LDGY8S1D-XCK0 NAND flash memory chips. The same controller and memory ICs power Samsung’s SM951 SSD introduced earlier this year.

Exact specifications of Apple’s custom SSD are unknown. The SM951 can read and write sequentially at up to 2150MB/s and 1550 MB/s respectively. Random read and write speeds of SM951 reach up to 130,000 and 85,000 IOPS (inputs/outputs per second) respectively. Samsung’s SM951 is also used inside PCs from the world’s largest PC maker, Lenovo Group.

Extreme performance amid increased reliability provided by Samsung’s 3D V-NAND memory clearly influenced Apple’s decision to use Samsung’s solid-state drives inside its latest laptops. The agreement between Apple and Samsung is confidential, yet, it probably is worth billions of dollars. Terms of the deal are kept confidential.

“Samsung Electronics recently agreed with Apple to provide SSDs using its latest three-dimensional (3D) V-NAND tech,” a source familiar with the talks told The Korea Times. “The deal is estimated to be worth a ‘few billion dollars’.” 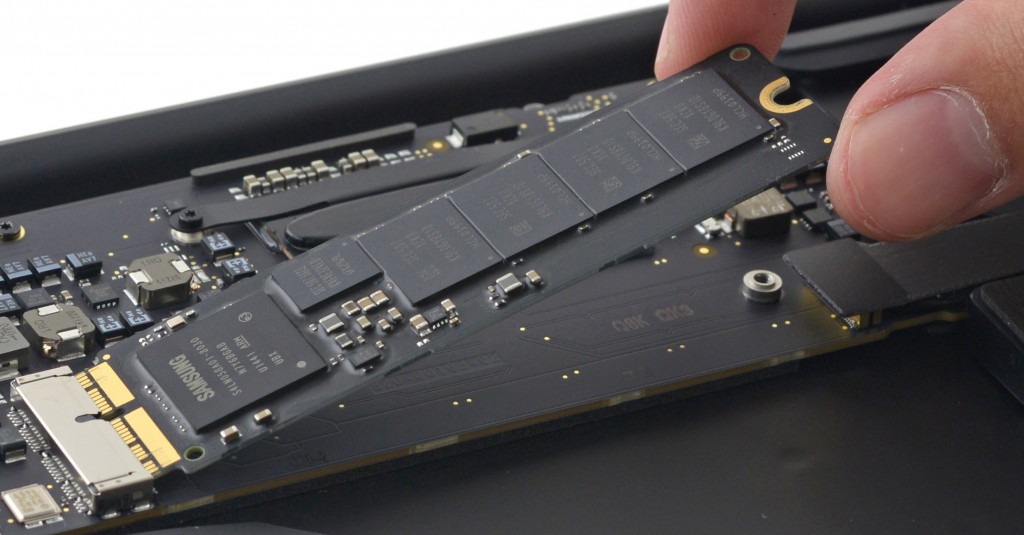 It is highly likely that Samsung’s latest SSDs and appropriate NAND flash memory chips use the second-generation V-NAND flash memory that stacks 32 multi-level cell (MLC) NAND storage layers in one chip package and are made using 42nm fabrication process.

Due to competitive advantages of Samsung’s 3D V-NAND, Apple could use the same type of flash memory for other products as well, which will significantly improve their performance.

KitGuru Says: The deal to supply SSDs for MacBooks is a significant one and will likely bring hundreds of millions of dollars in revenue to Samsung this year alone. This is not exactly a good news for Micron Technology, IM Flash and Toshiba/SanDisk, who will commence mass production of 3D NAND memory in 2015 and 2016, respectively. However, if Apple decides to extend usage of 3D V-NAND to other products, this will essentially make Samsung its almost exclusive supplier of flash memory in general. Now this is a bad news for all other manufacturers.

Previous You can check out Star Citizen for free this weekend
Next Consumer Oculus Rift headset may not be available this year, Oculus VR founder implies