Despite being the fourth-largest global smartphone brand, Xiaomi has yet to really crack the western market, with its popularity in Asia accounting for most of its market share. That could soon be changing, however, as following a recent expansion into Spain and Italy, Xiaomi has now officially launched in the UK.

Over the last few years, Xiaomi has built up quite a reputation for delivering high quality smartphones and other accessories, but at relatively affordable prices. The downside to that is UK customers would previously have had to import Xiaomi devices from China or other parts of Asia, potentially adding customs fees and VAT, reducing the overall value proposition.

That is now changing as today, Xiaomi held an event in London to celebrate the company's official launch in the UK. As part of that, Xiaomi will be selling its devices here through retailers including Amazon, Three and Carphone Warehouse. If you prefer a brick-and-mortar experience, there will also be a Mi store opening in Westfield White City, London, for those who want to get a new phone directly from Xiaomi. 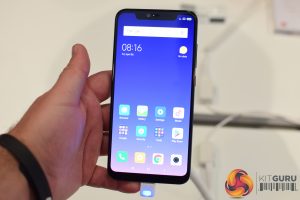 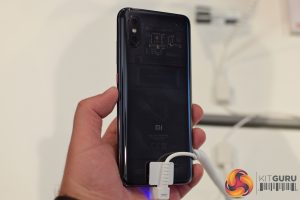 In a bid to give the UK launch some momentum, Xiaomi also used the London event to unveil its new flagship phone, the Mi 8 Pro. This builds on the Mi 8 released earlier this year, with modern features including an in-screen fingerprint scanner, 6.21in AMOLED display – with a notch, yes – and Snapdragon 845 processor.

The most striking and unique aspect of the phone is undoubtedly the glass black. That's because it's actually transparent, giving you a direct look onto the internals of the device. You can clearly see the NFC sensor, the large carbon-fibre wrapped battery cell and even the Snapdragon chip at the top of the phone. I have to say, it looks incredibly cool – move over colour gradients, I want a transparent phone!

The front of the phone is less striking, with a very familiar look – meaning a relatively wide notch and a small chin at the bottom of the phone, like almost every other Android phone to launch this year. The display itself is a 6.21in AMOLED panel, using the 18.7:9 aspect ratio and 2248 x 1080p resolution. I only had a small amount of time to use the phone at the launch event, but the display looks decent – if not mind-blowing – with relatively punchy colours and a good level of contrast. 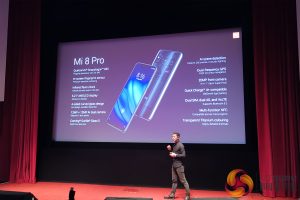 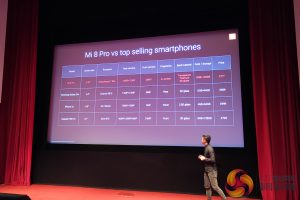 Elsewhere, the 12MP+12MP (one wide-angle, one telephoto) camera configuration is the same as on the original Mi 8, with a Sony IMX363 primary sensor and Samsung S5K3M3 secondary sensor, and that phone scored 105 for photos according to DxOMark. A big part of the camera system, and a growing trend in the smartphone market, is also the AI scene recognition, which can detect up to 25 objects/scenarios and optimises the image accordingly.

Other core specs are pretty standard for a modern flagship, with the Qualcomm Snapdragon 845 processor, 8GB RAM and 128GB internal storage. The 3000mAh battery does seem like a relatively small size for a modern-day phone, though, so it will be interesting to test how long this can actually last in a real-world environment. In terms of software, funnily enough this wasn't actually mentioned at all during the launch event, likely because the Mi 8 Pro will ship with the older Android 8.1 Oreo OS, not 9.0 Pie.

Priced at just £499, however, the Mi 8 Pro looks set to do battle with the recently-launched OnePlus 6T as a flagship phone without an eye-watering price. Just how good it is as a whole, we can't yet say, but the on-paper specs are certainly impressive, so stay tuned for further thoughts.

KitGuru says: It is good to have another player in the UK smartphone market and I expect Xiaomi will made inroads with those looking for good value. Stay tuned for more on the Mi 8 Pro as well.