Today in London, Huawei announced its latest smartphones – the Mate 20 and Mate 20 Pro. These build on the success of Huawei's P20 series that launched last March with bigger and better screens, increased battery capacity and an updated triple-camera setup. We went hands-on with the new phones to tell you everything you need to know. 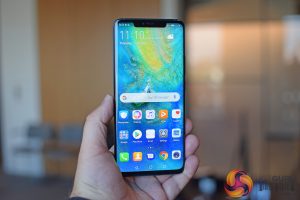 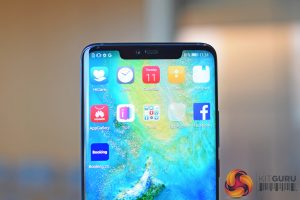 Starting with the top dog, the Mate 20 Pro, this sports a new 6.39in curved OLED display, with a resolution of 3120x1440p. This is notable for a few reasons – not only is it an 19.5:9 aspect ratio, meaning it is extra tall compared to most smartphones, but it also represents a significant jump in resolution. The P20 Pro, for instance, has a 6.1in 2240x1080p display, giving a pixel density of 408 PPI. The Mate 20 Pro ups this to 538 PPI – higher than even the Note 9 or Pixel 3 XL. The panel itself also looks much improved over the P20 Pro, which I always found to look a touch subdued compared to some of the competition, while the new curved edges on the left and right hand side also look very stylish.

In terms of design, we can also see Huawei has tried to make the Mate 20 Pro as bezel-free as possibly, with just a small chin at the bottom and a fairly wide notch at the top of the screen which houses the 3D facial unlocking technology. Compared to the P20 Pro with its front-facing fingerprint scanner, the Mate 20 Pro does pack in more screen in a body that is roughly the same size. There is still a front-facing fingerprint scanner, though – but it is under the display, and Huawei said it is up to 20% faster than in-screen scanner found on the Porsche Mate RS released earlier this year. 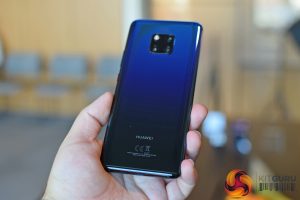 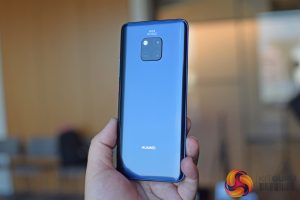 Speaking of design, the phone will be available in 5 colours – Pink Gold, Midnight Blue, Emerald Green, Twilight (above, left) and Black. The Twilight colour gradient has been changed significantly since we first saw it debut with the P20 Pro – on that phone, it is much more about light blues and light purples, where the Mate 20 Pro Twilight option is more dark purple and navy – but I still think it looks really swish.

Huawei also introduced what it calls a ‘hyper optical' pattern to the Blue and Green models, and you can see this above, right. It is essentially a new look which adds lots of hairline stripes to the back of the phone, and while it feels smooth when you brush your finger down the glass, if you scratch it with your nail it feels ‘fuzzy' like vinyl. Huawei says this primarily helps to avoid fingerprints while also providing extra grip.

One other design change is that the Mate 20 Pro is now IP68 rated, which improves on the P20 Pro's IP67 water and dust resistance rating. 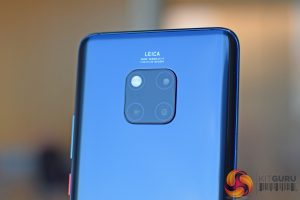 On the back of the phone, the most significant thing is the triple-camera setup. This is now positioned in the middle of the phone, with the three lenses and flash making up a small square module. While the Mate 20 Pro boasts the same 40MP primary camera and 8MP telephoto lens as the P20 Pro, it has removed the monochrome sensor in favour of a new 20MP ultra-wide angle lens. This has a f/2.2 aperture with an equivalent 16mm focal length, and should also help with macro photography as it can focus on objects from just 2.5cm away.

On top of the updated hardware, Huawei's Master AI 2.0 is set to offer improved AI integration, with significantly better scene detection and predictive focus being highlight points for the AI system. I've not been too keen on this in the past, so we will have to see how it works day to day. The phone's AIS (artificial intelligence stabilisation) has also been improved for shooting videos, although we again haven't been able to test this yet. 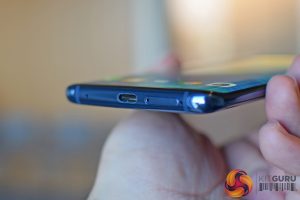 Elsewhere, the phone is powered by the new Kirin 980 chip, announced back at IFA 2018, which is one of the first 7nm mobile CPUs to hit the market. This is alongside a new 4200mAh battery (up 200mAh over the P20 Pro) but given the increased screen size and resolution, it will be interesting to see how long the phone lasts compared to its predecessor.

Working with the new hardware, EMUI 9 is set to launch alongside the new Mate 20 series, which is of course built on Android 9.0 Pie. This brings a revamped UI to the phone, with a cleaner and less cluttered look than previous versions of EMUI. Other new features for the Mate 20 Pro include support for 15W wireless charging, the ability for the Mate 20 Pro to act as a wireless charger for other QI-enabled devices, as well as 40W wired Super Charge technology which should provide a 70% charge in just 30 minutes. 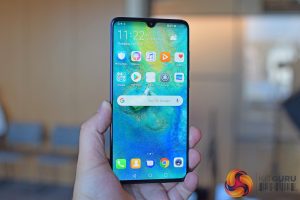 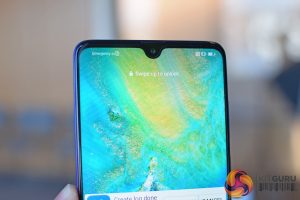 The Mate 20 keeps the same core of the Mate 20 Pro – including the Kirin 980 and a similar triple-camera configuration – but presents it in a slightly different way. Primarily, it has a larger 6.53in 2244x1080p display – which is LCD, not OLED – and you can see it sports a much smaller teardrop notch – or ‘drewdrop' as Huawei calls it. It's certainly a striking design, but the smaller notch means the facial recognition is less sophisticated and secure than the Mate 20 Pro's 3D facial unlocking.

The 18.7:9 aspect ratio – coupled with the very large screen – does make the Mate 20 feel absolutely massive, and it is noticeably wider than the Pro version. While you don't get an OLED panel, meaning colours won't be quite as punchy, this could make the Mate 20 appealing for those looking for a new multimedia powerhouse, as I would bet 1080p video looks fantastic on that big screen. 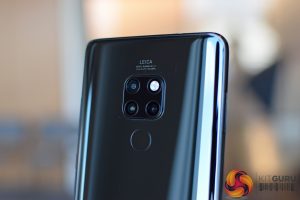 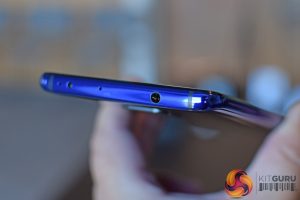 The cameras are still the same in the sense there is a primary, telephoto and ultra-wide angle units, but these do have lower pixel counts compared to the phone's big brother. The primary camera is 12MP, for instance, with a 16MP ultra-wide lens.

On top of this, its battery is smaller at 4000mAh (which is still very large, mind) and it does not support wireless charging, while the included SuperCharger is also slower at 22.5W vs the 40W unit for the Mate 20 Pro. There is also no in-screen fingerprint scanner, with a traditional capacitive fingerprint scanner positioned just below the camera module on the back of the phone. You do get a 3.5mm headphone jack with the Mate 20, though, and that is positioned on the top edge of the phone.

Update: Pricing for the Mate 20 Pro has been revealed, with the phone at £899 SIM-free. It will be available from October 26.

KitGuru says: The Mate 20 Pro looks like a pretty solid upgrade over the P20 Pro, with a larger (and sharper) display, bigger battery and new ultra-wide angle camera. Stay tuned for the full review coming soon.