The ASUS GL702VT comes in a fairly typical box, and there’s nothing in it apart from the notebook, power supply and cable. No bonus peripherals here. 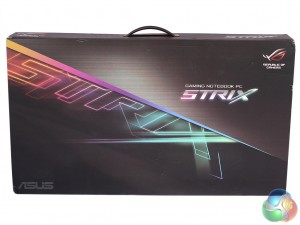 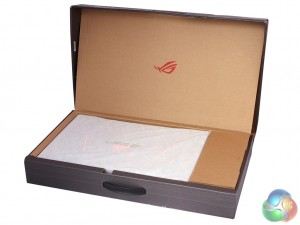 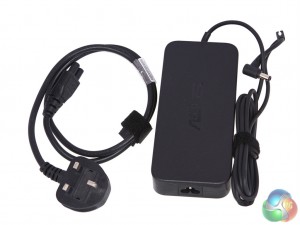 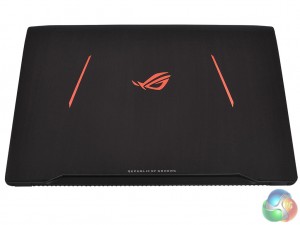 The black and day-glo orange chassis combines style with gaming bling in an attractive manner. Some areas of the orange are lit whilst others are just luminous. It’s an effective combination that says you’re serious about gaming. 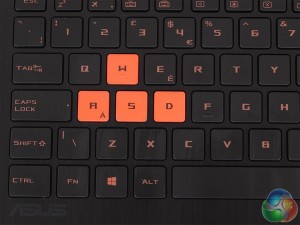 The keyboard takes advantage of the width afforded by the 17.3in form factor to provide a full numerical keypad on the right. The W-A-S-D keys are coloured orange so you’re unlikely to miss them, even in quite dim conditions.

However, the font used on the keys is a little hard to read. The subtle backlighting glows through the orange bits of the keys. 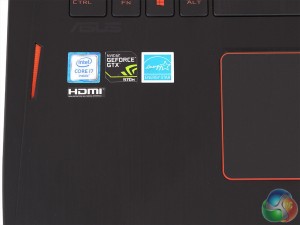 The large one-piece keypad is just about positioned beneath the space bar, which should minimise the effects of accidental brushing when typing with both hands on the keyboard.

Assuming you actually do normal stuff like typing up documents on this system. 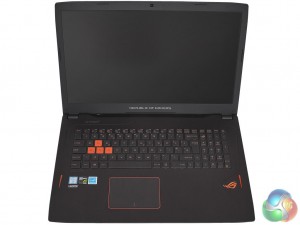 The 17.3in screen has a matte finish and decent viewing angles. The non-glossy surface means that distracting reflections are kept to a minimum. The resolution is 1,920 x 1,080, which is significantly behind the 4K screens that are being provided in some 17.3in laptops – and even smaller.

However, for the GPU supplied, this is probably the optimum resolution, and the 4K options push the price up considerably. It’s a bright and clear panel that is comfortable for gaming. It’s also worth noting that the refresh rate of this screen is 75Hz, not the usual 60Hz. 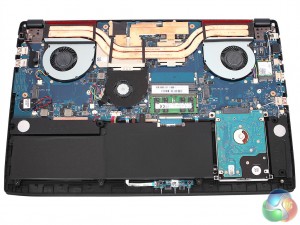 The GL702VT sports a Core i7-6700HQ processor from Intel’s latest Skylake generation. This quad-core CPU runs at a nominal 2.6GHz, but with a 3.5GHz Turbo mode for a single core, 3.3GHz for two cores, and 3.1GHz for all four – so it’s essentially a 3.1GHz processor.

This is the second slowest mobile quad-core from Intel’s Skylake range (the i5-6300HQ is slower), but it will still be great for gaming, and only draws a maximum 45W, so should be decent for mobility too. 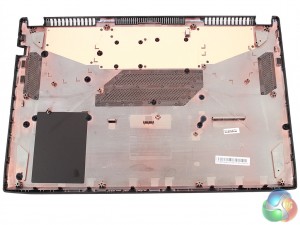 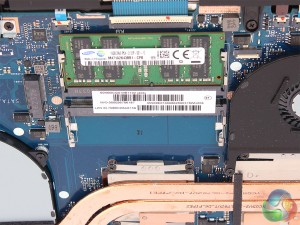 As this is a Core i7 rather than i5, there’s Hyper-Threading on board, so the 6700HQ can run eight threads simultaneously. Our sample shipped with 16GB of 2133MHz DDR4 SDRAM, supplied as a single 16GB DIMM. This is a slightly unusual choice, as it means the RAM will only be operating in single-channel mode.

However, at least there’s room for upgrade, with a single slot free, although it’s not that easy to get the single-piece base off of the chassis. Ten screws must be removed, followed by very careful leverage of the gap between the base and upper chassis. 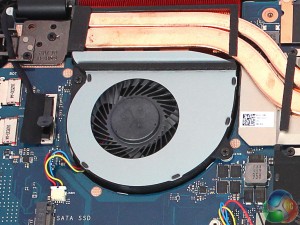 NVIDIA’s Pascal generation had yet to make it into mobile form at the time of review, so the NVIDIA GTX970M graphics still represents a high-end choice for notebook graphics.

The Core i7 processor also supplies Intel HD Graphics 530, running at 1050MHz, which NVIDIA’s Optimus technology can switch to when the graphics tasks are not strenuous, to save power. However, when gaming the GTX970M will take over completely.

There are faster NVIDIA GeForce mobile chips available, with a 980M and mobile version of 980 also on the market. But the 970M still offers a very decent 1,280 CUDA cores running at 924MHz, with a 993MHz boost mode. 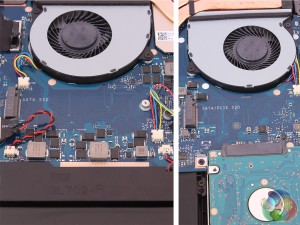 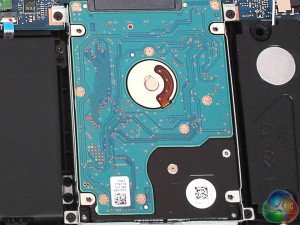 One area where ASUS has cut costs with this model is in the storage department. There’s no SSD for rapid booting and app loading.

However, you won’t be left wanting for capacity, as the conventional hard disk supplied is a 1TB Hitachi Travelstar 7K1000, which has a 7,200rpm rotational speed and should still be reasonably quick for a notebook mechanical storage device.

There are two M2 slots free on the chassis if you did want to use a SSD, one SATA only, the other SATA or PCI Express. 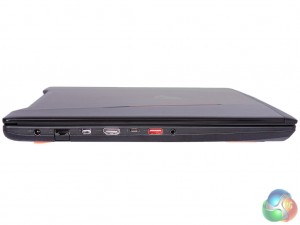 Connectivity is decent, with plenty of space for ports in a 17in form factor chassis. On the left, alongside the power connector, is a Gigabit Ethernet port, mini DisplayPort, full-sized HDMI, USB 3.1 Type C, conventional USB 3.0 and a combo headphone and microphone minijack. 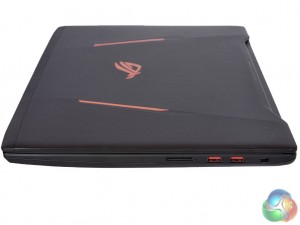 The right provides a Kensington lock slot, two more USB 3.0, and a full-sized SD Card reader. So overall there are plenty of options for hooking up external peripherals and extra monitors. 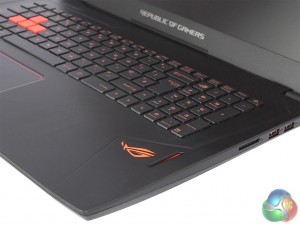 The orange speaker grilles allow through a reasonable level of sound volume for a notebook, although you will probably be gaming with a headset anyway.