3DMark is an essential tool used by millions of gamers, hundreds of hardware review sites and many of the world’s leading manufacturers to measure PC gaming performance.

Futuremark say “Use it to test your PC’s limits and measure the impact of overclocking and tweaking your system. Search our massive results database and see how your PC compares or just admire the graphics and wonder why all PC games don’t look this good.

To get more out of your PC, put 3DMark in your PC.” 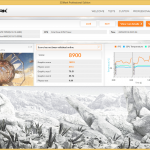 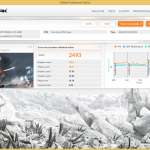 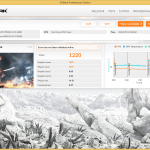 The Pegasus hauls along at an impressive rate in 3D Mark and delivers scores that match a mid-range PC.

The point of reference for the DinoPC Pegasus is the MSI GS70 2OD-Stealth that also measures in at 17.3-inches and uses the same nVidia GTX 765M graphics. The main difference is that the MSI has a pair of SSD in RAID and is powered by a Core i7 whereas the DinoPC has to limp along with a Core i5.

You get a clear comparison in 3D Mark Fire Strike where the MSI scored 2,238 and the DinoPC scored 2,493. In the Physics section of the benchmark the MSI scored 8,971 while the DinoPC achieved 4,466 (half the CPU cores, half the score) however that didn’t have an impact on the overall score so both laptops scored equally well,

While I was benchmarking the DinoPC it quickly became apparent that the processor would put the cooling system under a modest amount of load. The fan would speed up audibly in quick bursts and then slow down once the CPU was under control.

By contrast the GTX 765M graphics were able to work the cooling rather harder and the fan became relatively noisy however the sound level was always perfectly bearable when the audio was coming through the speakers.