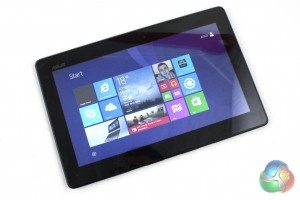 The Transformer Book looks T100T like any other tablet without the keyboard dock attached, with no obvious indicators that this is a hybrid model. The front of the unit is constructed entirely from a single piece of glass, although there is a large black border surrounding the 10.1″ screen. 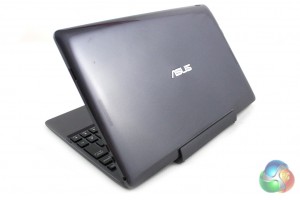 Turning the tablet around reveals a glossy grey plastic back which has a subtle swirl imprinted into the design. While this looks quite nice, it picks up fingerprints very readily and it does not feel anywhere near as sturdy as tablets with metal backs.

It is also a little slippery which isn’t ideal when holding the tablet with one hand. Even though this isn’t a premium tablet, we would have liked to see Asus using better quality materials in the construction. 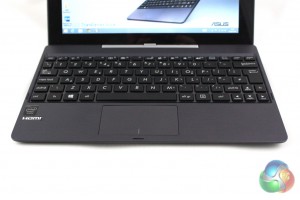 The aesthetic design of the keyboard dock contrasts slightly from the main unit. The palm rest is finished in textured matte plastic which has been designed to resemble brushed aluminium. It feels a little cheap and tacky, though.

The back of the keyboard dock is finished in rubberised plastic which feels much better quality than the rest of the unit. 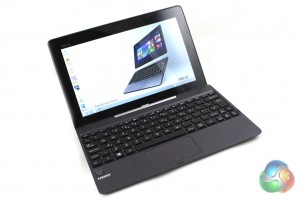 Asus have been forced to use a reduced-size keyboard to conform to the size of the tablet. This feels rather cramped during use and means that the Transformer Book will struggle be a proper laptop replacement.

We don’t rate the keyboard highly due to the lack of tactile feedback, especially for more intensive duties. 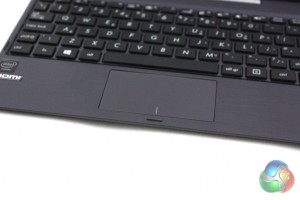 There is a small touchpad underneath the keyboard which works pretty well in practice. This is particularly useful when using non-touch optimised applications.

The only other feature of the keyboard dock worth mentioning is a single USB 3.0 port on the left side of the unit. Asus could have added another USB port here easily enough, although we wouldn’t consider a single port a huge issue. 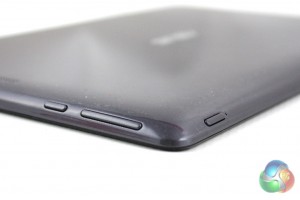 Unlike most Windows tablets, the Transformer Book doesn’t feature a Start button on the front. Asus have relegated it to the left hand side of the tablet alongside the volume controller. The power button is located nearby on the left side of the top edge of the tablet. 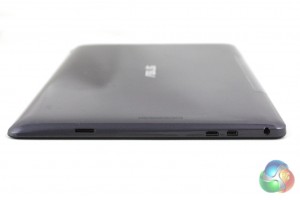 Moving around to the right side of the tablet, we find a micro-USB connector alongside a micro-HDMI connector and a 3.5mm headphone jack. There is no micro-SD card slot in this tablet, though, meaning that you can’t expand the 32 GB internal memory. 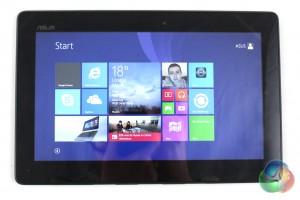 Asus have chosen to use a 10.1” screen in the Transformer Book, with a relatively low resolution of 1366 x 768 pixels.

Still, this is high enough resolution to play 720P video and is higher in terms of PPI than most laptops at this price point which typically have significantly larger screens with the same resolution. 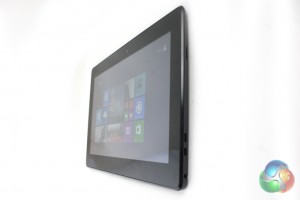 Viewing angles are acceptable, but the excessively glossy display tends to wash out colours when viewed from the side.  Although this is supposedly a high quality IPS panel, it seems to suffer from a yellow tint. Unfortunately we weren’t able to get rid of this by tweaking any of the colour settings.  This was particularly noticeable when using the tablet next to another device. 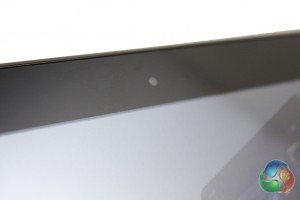 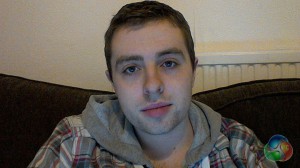 There is a 1.2 Megapixel front facing camera located just above the screen which is ideal for video chatting.

The PM161Q is a lightweight, 15.6-inch monitor with a slim design that weighs just under 1kg...