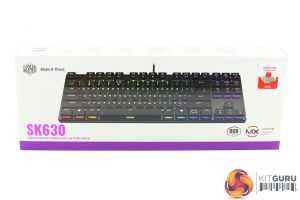 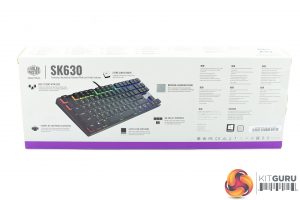 The Cooler Master SK630 ships in a white box with Cooler Master’s signature purple accenting. The front of the box sports a large image of the keyboard itself, while the back of the box highlights the different features of the SK630. 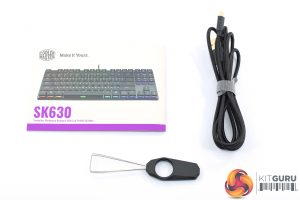 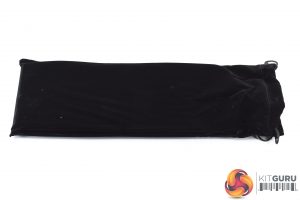 The keyboard itself comes packaged neatly inside a soft velvet carry case, which not only protects it from scratches during transit, but also provides a tidy way of transporting the keyboard around. 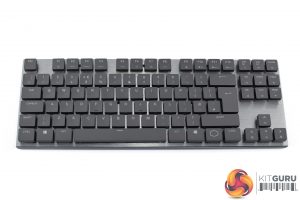 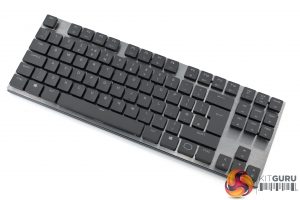 Getting a look at the SK630, it looks like a fairly conventional TKL keyboard – at a distance, you probably wouldn’t know it doesn’t use traditional full-size switches.

It is still a very compact board, though, with no dedicated media keys and hardly any bezel – Cooler Master has obviously taken the view that anyone buying a low profile board probably wants to save as much space as possible, and I’d say that makes sense. For those interested, the dimensions of the SK630 are: 353.5 x 125.5 x 29.8mm, with the latter figure being especially important – it’s less than 3cm tall. 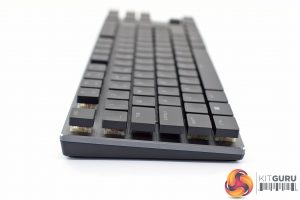 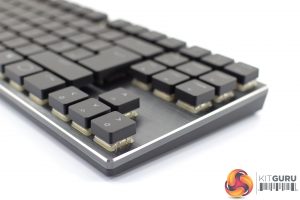 It’s also worth pointing out the brushed aluminium top plate that is fitted to the SK630 – the rest of the keyboard is made from plastic, but a metal top plate not only looks good but also adds some structural rigidity. We can also see that the edge of this top plate is bevelled, and overall I think it looks very stylish in a sleek and minimalistic way. Bombastic gaming keyboard this is not. 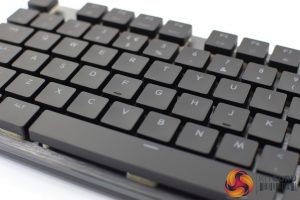 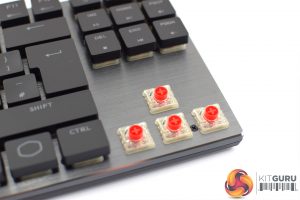 Getting a closer look now, the first thing to touch on is Cooler Master’s choice of key caps. These are low profile caps to obviously complement the low profile switches, but each cap is also slightly contoured in the middle so they’re not perfectly flat. This gives a slightly more natural feel to the caps than if they were just flat pieces of plastic. It’s also worth pointing out the caps are made of ABS plastic, not PBT.

Now, as for the switches – they are of course the Cherry MX Low Profile Red RGB units. At the moment, Cooler Master’s low profile boards will only ship with these Red switches (linear, non-clicky), though it is possible we may see other variants of Cherry switches get the ‘low profile’ treatment. 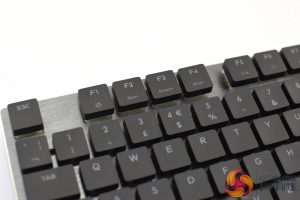 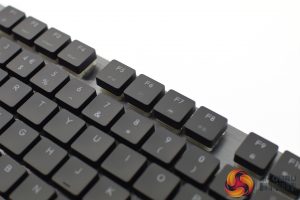 Taking a look at the function keys now, this is where Cooler Master has included a lot of extra on-the-fly functionality for the SK630 – you can choose between all the available RGB LED modes for instance, and customise the backlight colour using these keys. Play/pause/skip and volume controls are also secondary functions on the INS, HOME and PGUP keys (above the arrow keys). 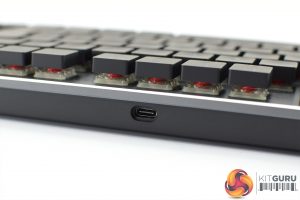 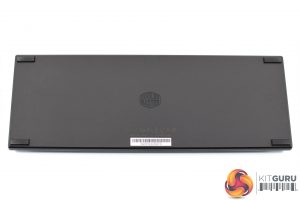 At the top edge of the SK630, we find the single USB-C port – a 1.8m cable is included in the box. I also very much appreciate that it is a USB-C connector, instead of microUSB, as I would expect the connector to last significantly longer than if it were microUSB.

Lastly, if we flip the keyboard over, we can see the underside is quite plain. A Cooler Master logo is positioned centrally within the black plastic frame, while there are also four rubber pads in each corner of the keyboard. As this is a low profile board, it is not a surprise to find there are no feet to raise the keyboard up higher than the default position.