Mechanical keyboards are a staple for many serious PC gaming set ups. These switches offer more tactile feedback, faster actuation and longer life spans when compared to cheaper membrane/rubber dome boards. However, with so many different kinds of switches floating around, it can be confusing to decide which one to go with. Today we'll be going over the different mechanical switches currently on the market, explaining what each of them do differently.

Before we dive into the different switch makers and their many offerings, let's break down what a mechanical switch does. Rubber dome switches are fairly simple, utilising piece of plastic under the key that depresses the rubber dome and makes contact with the underlying circuit board. Mechanical switches have more going on under the hood and offer many benefits, ranging from different levels of actuation and force required to register a keypress, to different levels of feedback (tactile or linear).

Individual mechanical switches use a spring mechanism in each key and metal contacts to register a key press without having to necessarily push a key all the way down to the bottom of the keyboard. Below you'll find an image that shows how tactile, linear and clicky switches work under the hood.

Tactile switches include a small ‘bump' that you will feel while typing. Many typists prefer tactile switches due to this level of tactile feedback. Tactile switches can be broken down further into clicky and non-clicky switches. In gaming circles, linear switches tend to be more popular.

A linear switch removes the ‘bump' element inside of the key switch, which results in less noise and a smoother key press from top to bottom. This also allows for quicker actuation and lower necessary force for each key press, but it differs quite a bit between different switch types- which we'll begin diving into below.

Cherry is often viewed as the gold standard for keyboard switches. The first Cherry MX switch appeared in 1983, and while there has been much more competition over the last few years, Cherry is still fairly dominant in the mechanical keyboard space.

There are four main Cherry MX switches you are likely to come across as a PC gamer: Red, Blue, Brown and Speed. However, Cherry also has a few other variants, including Cherry MX Black, White and Green. Almost all of Cherry's switches have an actuation distance of 2mm and a total travel distance of 4mm. There is just one switch that differs in this area, which we'll get into below.

Cherry MX Red- the most popular mechanical switch. Red switches aren't clicky and don't offer tactile feedback, making them quieter than other alternatives. Red's are also very light, requiring just 0.45 N of force to actuate. This means that each key press activates faster and registering each press will be easier on your fingers.

Cherry MX Speed- Speed switches first debuted in 2016 on a Corsair keyboard. These were introduced to compete with other new switches hitting the market. Cherry MX Speed requires the same 0.45 N of actuation force as Cherry MX Reds, but the actuation point is found at just 1.2mm, meaning each key stroke is registered well before the key is close to bottoming out.

Cherry MX White- White switches are very rare and differ from Reds in one key area- actuation force. Cherry MX White switches require 0.55 N of force to actuate, making them slightly harder to press. It is far from being the heaviest linear switch in Cherry's lineup though.

Cherry MX Black- Black switches are more common than whites but still not widely used. These require 0.60 N of force to actuate. This results in the switch almost pushing back at you with each key press.

Cherry MX Linear Grey- Cherry MX Grey switches are also rare, but it is the only Cherry switch to come in both a tactile and linear variant. These require a whopping 0.80 N of force to actuate, making them the heaviest switch in the line-up by quite some margin.

Cherry MX Brown- Brown switches are quieter than most on the list. It is a tactile switch, so you will physically feel the point of actuation with every key press. However, they aren't clicky, making them quieter than Cherry MX Blue switches. Browns require 0.45 N of force to actuate, just like Reds, but the tactile feedback kicks in after 0.55 N of force is applied.

Cherry MX Blue- My personal favourite switch but often overlooked due to their noisy nature. Cherry MX Blue switches are clicky, so typing at speed generates plenty of noise. The click adds an extra layer to the tactile feedback received with each key press. They are slightly heavier than Browns, requiring 0.60 N of force to get over the tactile bump.

Kailh, also known as Kaihua, first appeared in 1990 and is the closest rival to Cherry. Kailh switches are made in China and grew its presence by offering cheaper alternatives to Cherry MX. Since then, Kailh has gone on to strike manufacturing deals with other keyboard makers, including Razer. For this section though, we'll be focusing on Kailh's in-house designs.

If you ever see a keyboard being marketed with mechanical switches and no mention of Cherry, then chances are, Kailh is what is being used under the hood. Kailh has an alternative for each of Cherry's major switch types, they do feel slightly different, but in recent years the quality gap shrunk significantly.

Kailh Red- Kailh's red switch type is ever so slightly heavier than the Cherry equivalent, requiring 0.50 N of force to actuate. Aside from that 0.05 N difference, the switch is essentially the same.

Kailh Speed Silver- This is Kailh's linear equivalent to Cherry MX Speed. The actuation distance is reduced to 1.3mm versus Cherry's 1.2mm, and force matches Kailh Red switches at 0.50 N.

Kailh Brown- Just like Cherry Browns, Kailh's alternative is tactile without the click. The switch actuates at 0.50 N of force, matching Kailh Reds but with added tactile feedback.

Kailh Blue- The blue switch is tactile and features the click. To actuate, Kailh Blues require 0.50 N of force, but the click kicks in after 0.60 N of force has been applied.

Kailh Speed Copper- Another tactile ‘Speed' switch. This one removes the clicky element but other aspects remain the same. It is essentially a brown switch with a quicker actuation point (1.3mm versus 2mm).

Razer has been around for years, and used to utilise Cherry MX switches for its keyboards. That changed in 2014, when Razer designed its very own slate of mechanical switches and tapped Kailh to manufacture them. All of Razer's switches focus on gaming over anything else, and over the years, new flavours have been added to the line-up fairly consistently. 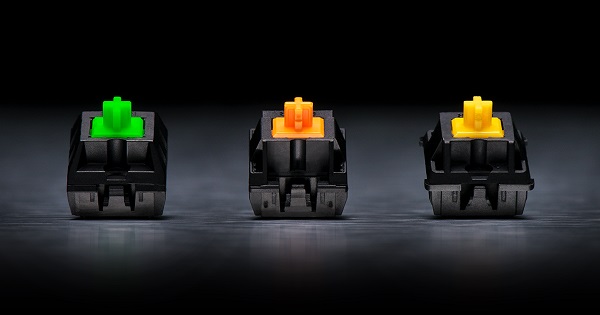 Razer Yellow- This is Razer's only linear mechanical switch to date. It features an actuation point of 1.2mm, matching Cherry MX Speed. It also has a lower travel distance compared to every other mechanical switch on this list so far, bottoming out at 3.5mm rather than 4mm. Razer Yellow switches require 0.45 N to actuate, making them lighter and swifter than most other switches available today.

Razer Green- This is Razer's equivalent to Blue switches. It is tactile and clicky, with an actuation force of 0.55 N.

Razer Orange- This is Razer's equivalent to Brown switches, featuring a tactile bump but without the click. It has the same actuation force of 0.55 N, making the lack of audible click the only major difference.

Shortly after Razer debuted its first in-house mechanical switch designs, Logitech made a similar move. Logitech's Romer-G switches can be found on many of the company's own keyboards at this point. These switches are built in partnership with Omron from Japan, making them fairly robust with a lifespan of 70 million keystrokes per key.

The Romer-G switch hasn't expanded to match Razer, Cherry or Kailh levels of options, but there are three distinct versions available with different traits. 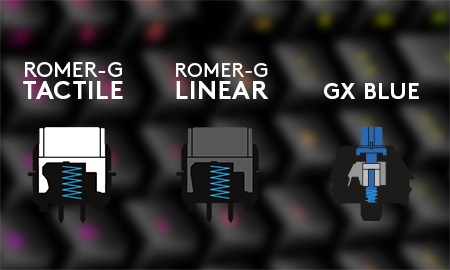 Romer-G Linear- This is Logitech's only linear switch. It has a 1.5mm actuation distance and a total travel distance of 3.2mm. In terms of actuation force, it is a very light switch, requiring just 0.45 N.

Romer-G Tactile- This is the same as the Romer-G linear, with a 0.45 N actuation force, 1.5mm actuation distance and a total travel distance of 3.2mm. The only difference is the addition of a tactile bump, which is silent, just like Brown switches.

GX Blue- This is Logitech's Cherry MX Blue equivalent. It has tactile feedback, an audible click and a 0.50 N actuation force. The actuation distance on this switch is higher, sitting at 1.9mm.

At Computex this year, Roccat joined the party with a mechanical switch design of its own. Roccat's Titan switches are designed in-house, but we currently don't know who handles the manufacturing. 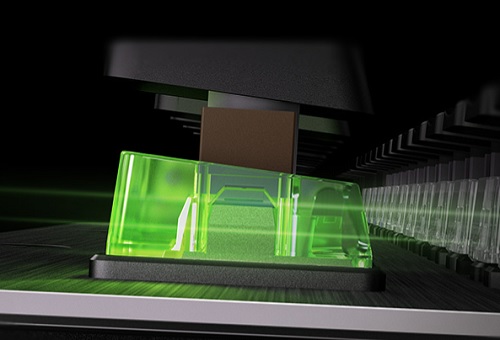 Roccat's switch also focuses on being sturdy, with a reinforced housing, which also aims to eliminate any key wobble while aggressively pressing switches or bottoming them out. The first Titan switch based keyboard has yet to land in the hands of reviewers, so it could be a while before we fully understand its pros and cons. We should learn more about this later in the year though.

There is no true ‘best switch' on the market when it comes to mechanical keyboards and each person will have their own personal preference. If you are a hardcore multiplayer gamer and want the fastest switch possible, then Cherry MX Speed, Razer Yellow, or Kailh Speed switches will help but don't expect it to be close to a night/day difference.

Linear switches are generally quieter, but tactile switches offer pleasing feedback, which is always going to be great if you spend a lot of time typing. This guide lays out all of the different variations of some of the most prominent switches on the market, but you'll only truly know which switch is right for you by trying out different options. Personally I like blue switches, but many people I know prefer reds. Hopefully this guide helps when it comes to figuring out which switch is best for you.

For fans of RGB, it is worth noting that every switch on this list either supports RGB right out of the gate, or features an RGB variant.

KitGuru Says: This guide will be updated over time as new switches come to the market. Currently, this focuses on the most prominent switches available, but as the market expands with new options, so will this list.