To test the SXFI Amp, I used it alongside my Google Pixel 3 and desktop PC for a week. Primarily I used it while listening to music with my phone, but also tried it when watching videos and playing some games.

The first thing I want to touch on is what the amp is like when you’re just using it as you would any other amp – with no SXFI holographic technology enabled, just listening to music as if it were a normal OTG amp.

In that sense, I have to say it is really good. For starters, it is rated for headphones with up to 600 ohm impedance and I found it really capable of driving a wide variety of headphones. E-MU Teaks, for instance, have a 25 ohm impedance and 106dB sensitivity, and I barely had to increase the volume via the amp to get a pleasant listening experience.

Sheer volume isn’t the whole story though, and while I was even able to get my HD 800 S from Sennheiser playing more than loud enough for my ears, this amp wasn’t quite able to deliver the same full sound that you’d get from a more expensive, powered desktop amp. But that is really at the extreme end of things – you’d never buy this amp to pair with a proper flagship headphone like the HD 800 S.

I tried plenty of IEMs and other headphones with the SXFI Amp, however, and it was really able to drive them very well. In fact, the overall sound is definitely superior to what I’d get from using the official Pixel 3 USB-C to 3.5mm dongle. This is thanks to the SXFI Amp’s use of the AKM AK4377 DAC, and overall I’d describe it as a relatively neutral presentation, but perhaps with a slight low-end emphasis.

To be clear, this amp isn’t going to take your cheap headphones and suddenly make them sound great, but if you pair it with some decent headphones or earphones, you get excellent results. The bass response from my Tin Audio T2s was noticeably improved with SXFI Amp versus a standard Pixel 3 dongle, for instance, while the mid-range retains all of the clarity you’d expect from the T2. 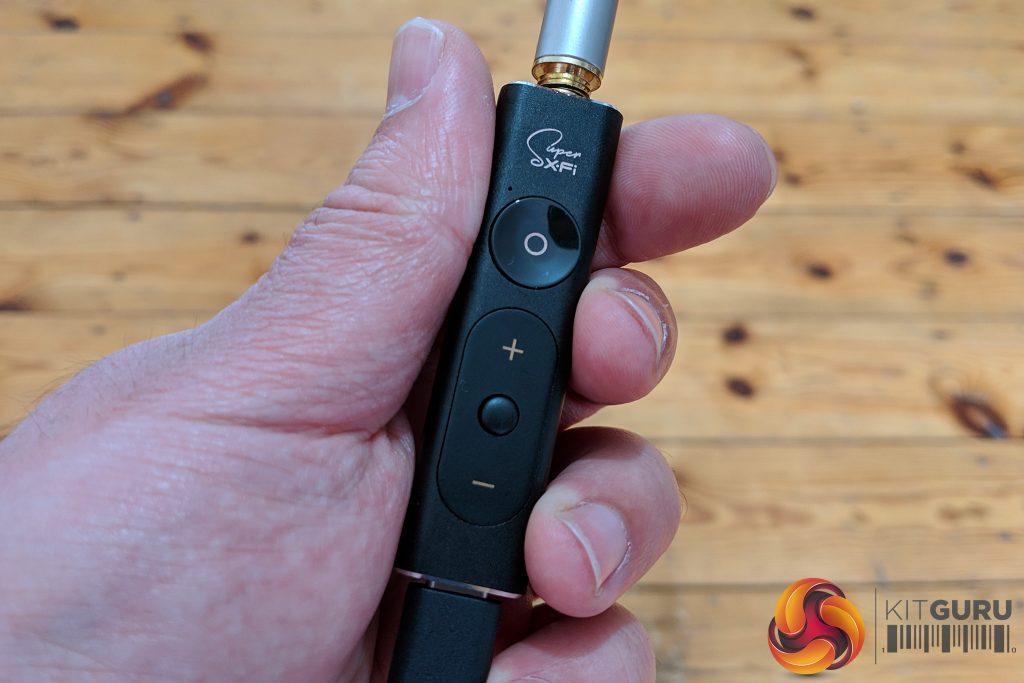 As for the E-MU Teaks, these are a lovely-sounding pair of headphones with a fun tuning that is really enjoyable for a variety of dance, rock and acoustic music. It’s not a headphone for listening to music analytically, but it has a lovely warm sound and is also forgiving of lower-quality recordings.

I’d describe the overall presentation as a ‘polite v-shape’ in that there is some emphasis to the bass and treble, with a slightly recessed mid-range, but it is not a really aggressive tuning. It is definitely right up my street for casual listening, though – sometimes you just want to sit back and listen to your favourite tracks presented in a fun and enjoyable manner, and that is where these headphones excel.

The SXFI Amp is able to drive them perfectly, too, and I definitely felt the SXFI Amp offered better high-end clarity than my desktop Magni 3 amplifier. We’re not talking night and day differences here, but what I am really trying to get at is this: the SXFI is just a great little amp for normal use, be it at home or on the go.

Unfortunately, the moment you hit that button on the amp to enable the SXFI technology, things go down hill – at least they did for me. Remember, the SXFI technology is designed to re-create the experience of listening to a multi-speaker setup but through your headphones. It does this by using its integrated SXFI UltraDSP chip to offer a ‘custom fit’ audio solution, which is tailored to each individual via the ear and head mapping process we looked at on the previous page.

What that means in practice, is that once SXFI is enabled via the button on the amp, the sound coming through your headphones changes in a lot of ways – most of which I don’t like.

Starting with what the SXFI technology does well, however, the main thing is definitely the increased soundstage. And I mean it is really increased – for lack of a better explanation, with SXFI is enabled it feels like the headphones are suddenly playing from above and below you, and not just to the left and right. The whole aural presentation is just massively expanded.

It’s such a dramatic change that when you switch back to playing music with SXFI off, everything feels claustrophobic by comparison. Even the HD 800 S – which has a legendary soundstage – sounds narrow in comparison once you go from SXFI on to SXFI off.

While that in itself is a definite plus, enabling the SXFI technology changes more than just the soundstage. If that was all it did, this would be a 10/10 review – but the musical presentation changes as well, and not for the better.

First of all, I noticed a prominent increase to the mid-bass which, in my opinion, made the low-end feel quite bloated. On top of that, the treble also sounded somewhat harsher and more sibilant on occasion, something which is not usually a part of the E-MU Teak’s sound, but it was definitely noticeable – and not overly pleasant – with SXFI enabled.

What I noticed first, however, was just how ‘echoey’ vocals sounded. SXFI introduces a lot of noticeable vocal echo, to the point where speech and singing just sounds bad. This is what put me off using the amp when watching videos, as anything that has a lot of speech sounds like its been run through a basic reverb plugin.

Lastly, despite the overall soundstage increasing massively with SXFI enabled, in my experience the technology actually makes it harder to pick out individual instruments and sounds. With SXFI off, for instance, the E-MU Teaks have accurate imaging which lets you isolate and pick out different aspects of your music. With SXFI on, the overall soundstage expands but the different layers seem to blur into each other.

Not only does that make music feel a little jumbled up, it’s not really a good thing for gaming. I connected the SXFI amp to my PC (you have to supply your own USB-A to USB-C cable) and loaded up Shadow of the Tomb Raider, and with SXFI turned on it was harder to get an exact sense of where sound was coming from – voices coming from my direct left with SXFI off, for instance, sounded like they were just ‘generally in front of me’ with SXFI on.

Don’t get me wrong, the massively increased soundstage does contribute to the overall atmosphere when gaming, but it doesn’t help when it comes to identifying the precise location of different sounds. Footsteps, too, sound quite echoey which is also off-putting.

In case you are wondering, the majority of my listening was done with the E-MU Teak headphones – provided by Creative for specific use with this amp as they are SXFI certified. I did try a few other earphones and headphones with the amp – including my 1MORE Quad Drivers, HD 800 S and even the Corsair HS50 – but the overall effect was the same. The intensity of the echo and sibilance varied slightly between the headphones I used, but it was never at a level where I’d be happy using SXFI for prolonged periods.

Lastly, I did also try re-mapping my head profile within the SXFI App – thinking that perhaps it hadn’t been configured properly. But after creating three separate profiles for my head and ears, nothing seemed to change between the three – so my overall impression of the SXFI technology is not great.