The ASUS AiMesh is interesting technology, although it’s not completely unique, with other manufacturers beginning to offer similar systems that we will be testing in future weeks. ASUS doesn’t guide you through setup as seamlessly as we’d like, but the process was relatively painless. If you happen to own an ASUS ROG Rapture GT-AC5300 router, adding a RT-AC86U as a satellite can seriously improve your 802.11n 2.4GHz range and performance.

Things aren’t quite so clear with 5GHz 802.11ac. With the routers we were sent, at least, you will need to make sure you’re on the fastest 5GHz radio. But once you are, performance is significantly improved at range. So the system delivers on its promise of providing whole home coverage without the need to replace your existing router. If you already own a feature-rich ASUS router like the ROG Rapture GT-AC5300, you won’t want to disconnect it, and AiMesh means you don’t have to. 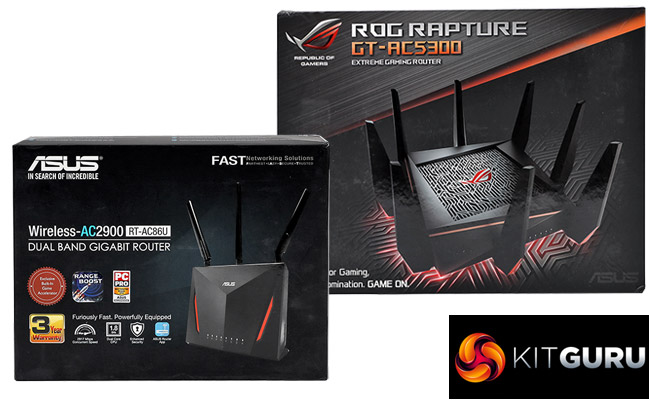 Looking at the routers individually, the ASUS RT-AC86U stands out as a fantastic mid-range router. It’s fast, has great range, and a decent feature set. It’s not the cheapest mid-range router at around £200, but is well worth considering if you just need a standalone upgrade.

Surprisingly, the ASUS ROG Rapture GT-AC5300 isn’t so unequivocally fast in its class. But it does have an excellent feature set, including the eight-port switch and comprehensive admin features for serious gamers. So the ASUS ROG Rapture GT-AC5300 is also well worth considering as a gaming router, although the NETGEAR Nighthawk XR500 is more of a bargain for this genre of user.

Overall, we are impressed with what AiMesh has to offer. The setup needs a little smoothing, with a bit more advice on which WiFi signal to use when you’re using AiMesh with a tri-band router. But it’s a distinct improvement over a repeater or extender, and saves you replacing your entire WiFi with a new mesh system, yet gives you similar improvements in range and performance.

Kitguru Says: The ASUS AiMesh is a great way to keep your existing router and extend its range, although there are still a few rough edges during setup.