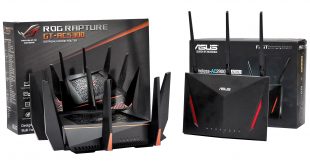 We have generally been impressed by the range and throughput potential of Mesh WiFi systems. But these either require you to turn off your existing WiFi or replace your original router entirely, which is a waste of money if you only just bought it. If you replace your router entirely, you will also be locked into the features available from the mesh kit, which may be limited for some routers. But what if you could get a mesh system using your existing router's WiFi? This is the basic theory behind ASUS's AiMesh.

Before mesh WiFi systems became widely available, extenders were a popular choice for increasing wireless coverage. However, these normally work by sitting on your original WiFi and then creating an entirely new WLAN with a different SSID. Switching to the secondary WiFi is only seamless if you're fully out of the range of the original one, otherwise you will need to switch manually, which is hardly user friendly.

A mesh WiFi is better than this configuration because it will create a WiFi network with a single SSID, so you don't need to do any manual switching. Generally, this is achieved by using one WiFi radio channel as the “backhaul” that connects the various satellites together, and then having all the satellites provide WiFi on the same SSID. A user shouldn't notice which satellite they're connected to. This works best with tri-band satellites, although it can work with dual-band as well, and some systems (notable BT's Whole Home and Google's WiFi) use a dual-band system quite effectively.

There's nothing special in hardware terms that a mesh WiFi satellite has compared to a regular router. The clever stuff is being performed by the firmware. So what if you could put mesh-capable firmware onto an existing router? This is the idea behind ASUS's AiMesh system. Although the company has a dedicated mesh system in the shape of the Lyra, AiMesh extends these abilities to a wide selection of the company's standalone routers. You can read the list of routers on the ASUS AiMesh website, but to test the capabilities of the system we were sent the top-end ROG Rapture GT-AC5300 and more mid-range RT-AC86U. 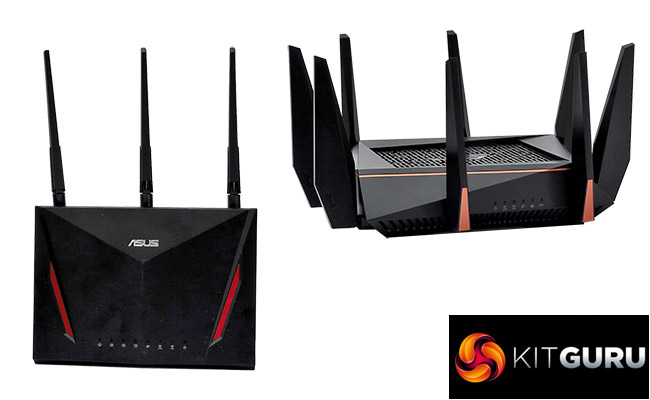 The ROG Rapture GT-AC5300 is a behemoth of a router, with eight antennas delivering tri-band WiFi in the form of two 4 x 4, 5GHz radios and one 4 x 4, 2.4GHz radio. This provides up to 2,167Mbits/sec on both 5GHz channels, and up to 1,000Mbits/sec on the 2.4GHz channel, giving the router's AC5300 rating. However, this only provides up to 1,734Mbits/sec of 802.11ac or 600Mbits/sec of 802.11n. Nevertheless, these are very meaty performance figures on paper. The GT-AC5300 also maintains the high-end image with eight Gigabit Ethernet ports for clients, and one more for the broadband WAN, plus two USB 3.0 ports for storage and printers.

In comparison, the RT-AC86U is much more modest, but still decently specified. It's only dual-band, with just three external antennas and one 3dBi internal one, which supplements the 5GHz signal. This gives it 3 x 3 for 2.4GHz and 4 x 4 for 5GHz, with up to 750Mbits/sec over the former and up to 2,167Mbits/sec over the latter, resulting in an AC2900 rating. This provides up to 1,734Mbits/sec of 802.11ac and 450Mbits/sec of 802.11n. The rest of the specification is less meaty than the GT-AC5300, too, with a quad-port Gigabit Ethernet switch plus another Gigabit Ethernet port for the broadband WAN connection. There's one USB 3.0 and one USB 2.0 port for printer and storage attachment.

However, what both these routers have in common is that they support ASUS's AiMesh. So in this review we're going to look at what the two routers offer individually, and then see how this is improved by joining them together in the AiMesh system. Let's start with the general hardware characteristics of the two products.