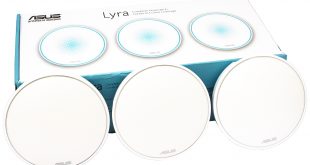 We have been expounding the merits of the latest Mesh networking products for a few months now, and there is an increasing range of options to choose from on the market. One of the more recent contenders is ASUS, with the Lyra. On paper, the Lyra is similarly specified to the NETGEAR Orbi RBK40 and the Linksys Velop – so it has plenty of potential.

The basic kit consists of three units, and at £379.99 inc VAT is similarly priced to the three-unit Linksys Velop. Also like the Velop, and unlike NETGEAR's Orbi, all three units are identical, so it doesn't matter which one you use to connect to your broadband. Each unit has two Gigabit Ethernet ports, one of which will be used for broadband connectivity in the primary unit, and the other for attaching wired devices. With the units operating as satellites, both Gigabit Ethernet ports can be used for attaching wired LAN devices.

Each unit is rated at AC2200, like the Linksys Velop satellites, and this is divided up into two 867Mbits/sec 5GHz 802.11ac radios plus a single 400Mbits/sec 2.4GHz radio. All three radios boast 2×2 internal antennas each, although ASUS quotes a total of seven antennas. Either the company's maths abilities are woeful, or there's an extra antenna doing something useful with MIMO to ensure the best possible signal shaping. 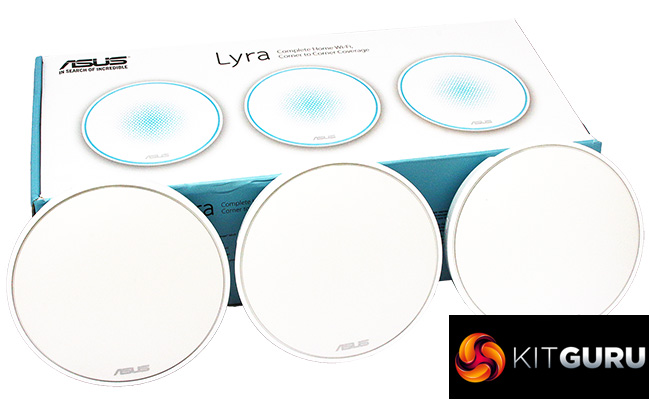 One of the 5GHz bands is used exclusively for the “backhaul” that connects the Lyra devices on the mesh to each other, so that each can then provide both 2.4GHz and 5GHz connections dedicated for client devices without also having to use these to communicate to the primary unit and broadband connection.

Coming in at significantly under £400, the ASUS Lyra is only mildly more expensive than the two-unit Linksys Velop, although NETGEAR's Orbi RBK50 is now quite a bit cheaper. Nevertheless, this is still a reasonable price for a three-unit mesh WiFi system. With decent performance and features, it could be a contender. Let's find out whether ASUS has what it takes to enter the ring with the best.