Mesh networking has been talked about for years, but it has only become a consumer reality in the last 12 months with the arrival of NETGEAR’s Orbi and Linksys’s Velop. The clear benefits of the format, however, now mean that the market is beginning to drown in options, with even vendors that are less well known for their routers entering the fray. Grand claims are being made about performance and house coverage, so we thought we would round up the biggest-name players and pit them against each other to see who was king of the airwaves.

This test will include all the main bundle options from NETGEAR and Linksys, up against the latest BT Smart Hub (which isn’t a mesh networking product but BT is making bold claims about its coverage), BT’s own Whole Home WiFi, which is a mesh networking product, and Google’s WiFi, which can be purchased as a 2-pack mesh option as well as standalone.

This isn’t an exhaustive group by any means, and we will also be testing other contenders over the coming weeks as they arrive. But our selection in this article includes the mainstream brands that are likely to be your first consideration, and the ones that will be selling in volume. 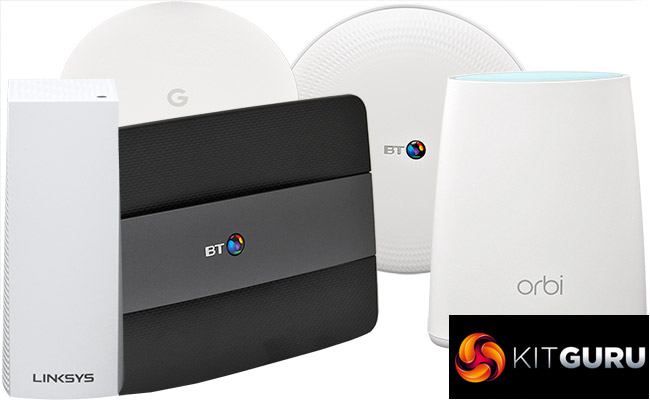 Before we get down to each of this month’s contestants in more detail, we should explain what mesh networking actually is and why you might want it. As any user of a WiFi network will attest, the further you are from the router, the worse the signal gets, and if there are objects in the way then that makes the signal degrade even more rapidly.

Businesses with Ethernet wiring across their premises get round this by placing access points strategically all around their buildings that use the same SSID (wireless network name) and authentication. Client devices connect to the nearest access point and users get a (relatively) seamless experience if they move around a building.

But most people’s houses don’t have Ethernet plumbed in, and whilst you could use powerline networking to place access points around your home (we will be reviewing a device range from devolo that does this in a few weeks), there are other options. A wireless repeater is one of these, but this will sit on your existing WiFi and then send out another signal, often on a different SSID, that you use when out of range of the primary signal. This isn’t an ideal solution, particularly if you have to switch SSIDs.

The answer is mesh networking. This is a system whereby each access point communicates with others wirelessly, and finds the fastest WiFi route back to the primary router via its WLAN siblings. The client SSID will be the same wherever the device is located, so the user won’t know which node they are actually communicating directly with.

The manufacturers in this test take subtly different approaches to this idea. All use multi-band nodes (usually triband) that will use one wireless wavelength as a “backhaul” for communicating between nodes. But whereas NETGEAR’s Orbi has a dedicated 5GHz 802.11ac radio for this, the Linksys Velop picks the best signal.

The Orbi also takes a “hub and spoke” approach, where individual nodes talk directly to the primary router, whereas the Velop nodes will go via the nearest neighbour, so in theory could be used to string out across a really large area with enough nodes. But whether this is the best approach for the average home user is questionable, as our previous testing has illustrated.

This month, we will be going into more depth with our testing, whilst using the same basic configuration (and the same house…) as before. We aim to provide the definitive answer to the question – which is the best option if you want great WiFi connectivity throughout a large flat or house, and even down the garden? But before we get to the performance competition, let’s meet the competitors.