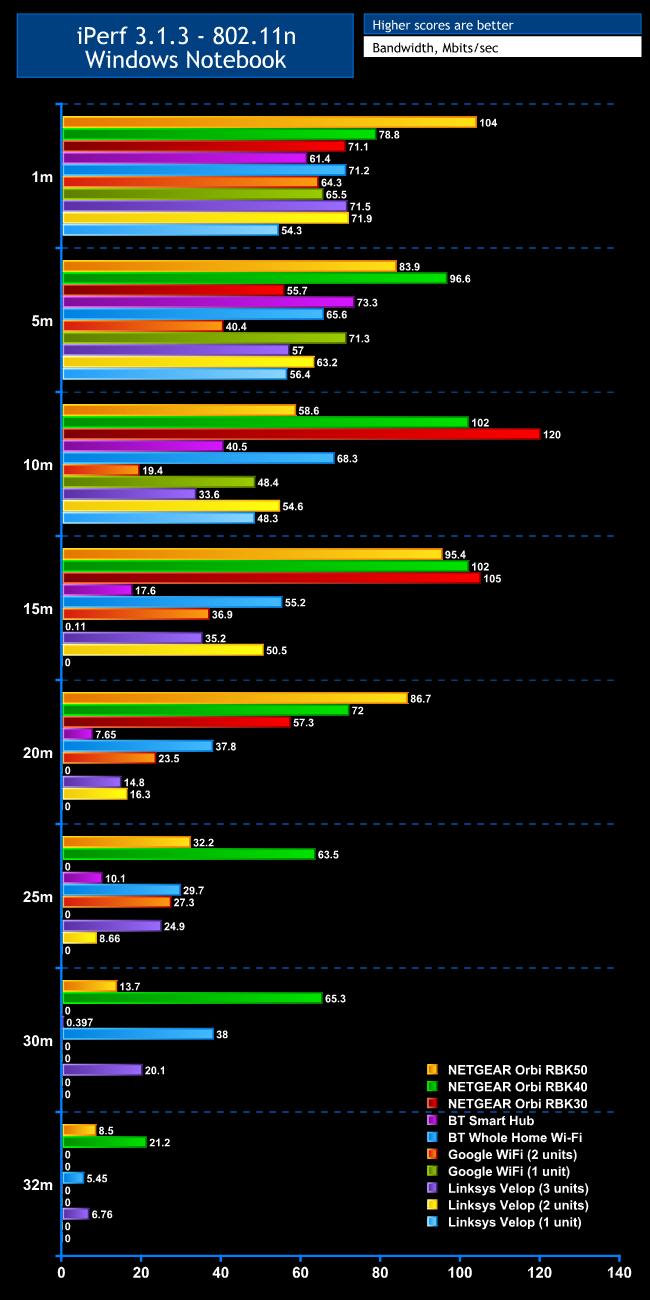 Whilst 802.11ac only runs at 5GHz, you can get 802.11n over both 5GHz and 2.4GHz. However, most devices will use the 2.4GHz frequency, which is similar to that used by devices like microwave ovens, so interference is more possible. However, the 2.4GHz waveband also goes through solid objects better than 5GHz, due to its longer wavelength. You can have up to four antennas, with 100Mbits/sec per antenna, but most devices don’t offer this. Our HP Folio 13 has three, so provides a theoretical maximum of 300Mbits/sec, which as with 802.11ac you will never get close to in reality.

At 1m, the clear winner is the NETGEAR Orbi RBK50, with the RBK40 second. Most other contenders are in the 50-70Mbits/sec mark, although the single Velop unit lags a little behind.

There’s not a huge drop-off at 5m in most cases, although strangely the RBK40 has taken the top spot from the RBK50, and the BT Smart Hub is better at this range too. The two-unit Google WiFi is last, and Orbi RBK30 second-last, although the single Google WiFi unit is doing well. Overall, there’s nothing clear we can say yet at this range.

The 10m range is also not that conclusive. The strange Orbi performance continues, with the RBK30 now the clear leader, offering the fastest 802.11n result in the whole test, with RBK40 second and RBK50 actually fourth behind the BT Whole Home Wi-Fi. Linksys Velop with two units is in third, and with a single unit in fifth place, but the three-unit setup languishes second from bottom, again confirming that the Velop with three units is not great for middle-distance performance. The BT Smart Hub is doing reasonably well, but Google WiFi with one unit is way ahead of two units, which is strange behaviour indeed, particularly as the latter is a clear last in this test.

Yet again, the 15m test shows where most single routers drop off – except the BT Smart Hub, which is still credible, albeit not up with the mesh options. The NETGEAR Orbis are way out ahead in the lead, and the RBK50 is again not far behind the RBK30 and RBK40. The BT Whole Home Wi-Fi is still providing very good 802.11n, as is the two-unit Linksys Velop. The three-unit Velop and two-unit Google WiFi are some way behind, but still doing well.

The NETGEAR Orbi RBK50 takes over again at 20m, with the RBK40 and RBK30 in second and third, still way ahead of all else. The BT Whole Home Wi-Fi is maintaining its fourth place, and Google WiFi with two units is keeping its end up well. The Velop with two units is still marginally ahead of three units, but the gap is much closer.

The 25m results have a few surprises. The NETGEAR RBK30 has dropped out completely, after a decent score at 20m. The RBK40 is back in the lead, but RBK50 is still doing well. The BT Whole Home Wi-Fi is holding up well, as are the two-unit Google WiFi and and three-unit Velop. The latter finally overtakes its two-unit configuration at this range. Amazingly, the BT Smart Hub is just about holding on at this distance too.

At 30m is where the BT Smart Hub finally begins to give up, with a non-usable performance score. The NETGEAR Orbi RBK40 is reigning supreme and the BT Whole Home Wi-Fi maintains a healthy second, with three-unit Velop in third but its two-unit sibling no-longer in range. Unusually, RBK50 came last in this test but it’s still just about usable.

The four units that were still in contention at 30m remain at 32m, although the Orbi RBK50 regains its second place, with the RBK40 first. Unlike with 802.11ac, the Linksys Velop three-unit configuration managed to penetrate the shed in 802.11n mode, and achieved third place, but the BT Whole Home Wi-Fi wasn’t that far behind, although both performance levels would only be enough for Web browsing and email, probably not watching video smoothly.

The results with 802.11n aren’t as clear as with 802.11ac, and this is likely because in a dense residential neighbourhood there will be a lot of interference at 2.4GHz. So some results may have been affected by the band the router had chosen being reduced in performance by competition from nearby WiFi signals. Nevertheless, the overall story isn’t that different from before. The NETGEAR Orbi RBK40 and RBK50 are the range and performance winners overall, although the other way round to before, with the BT Whole Home Wi-Fi acquitting itself well, albeit much slower. The one difference is that the Linksys Velop with three units is almost as good as the BT Whole Home Wi-Fi at reaching parts other wireless networks cannot reach. You’re better off with two Velops at shorter distances, but three units reach much further beyond 20m.