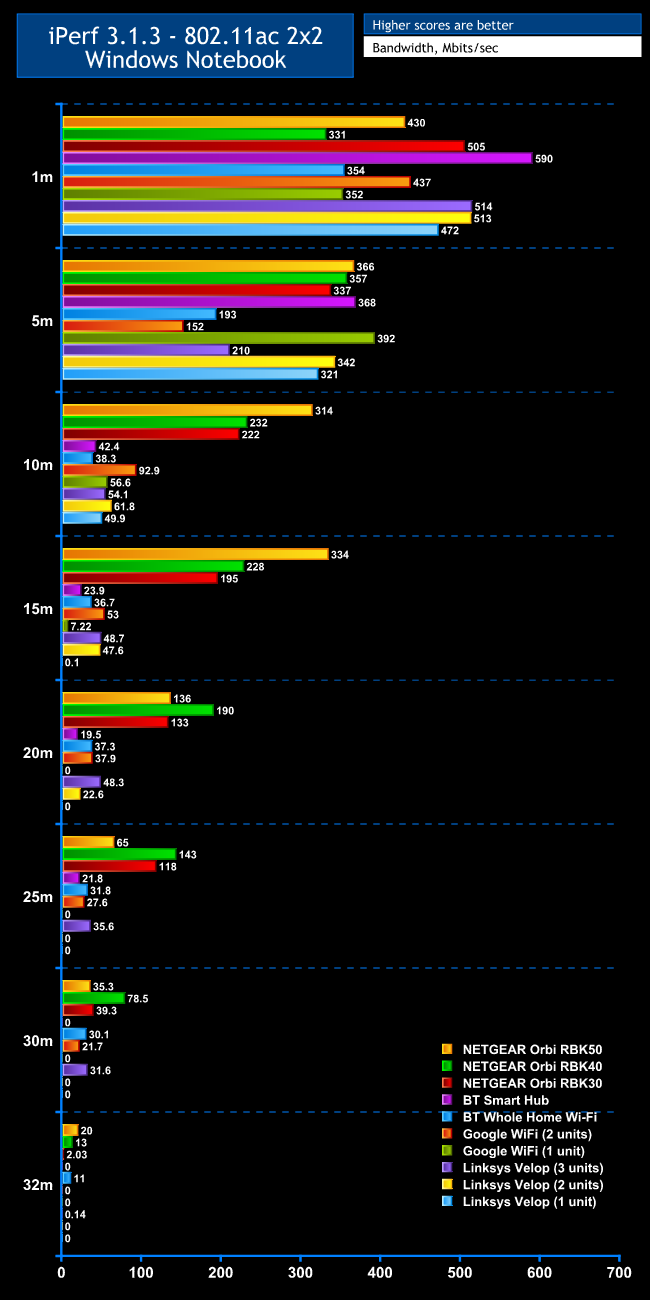 The Acer Windows notebook only has 2×2 802.11ac WiFi, providing a theoretical maximum of 800Mbits/sec, but again we’re not getting close to that performance.

As before, at 1m all the routers are doing well, with every single one providing more than 300Mbits/sec. The BT Smart Hub is trouncing the competition, but the Linksys Velop is doing very well, as is the NETGEAR RBK30, which is strange because the router for the latter is the same as the RBK40 that came last at this range. The difference between Google WiFi with one unit and with two is also surprising. But all of the devices will provide great multi-client peformance at close range.

There is already noticeable drop-off at 5m, and here Google WiFi with a single unit has leapt from second last to the lead. The BT Smart Hub is still doing amazingly well, as are the NETGEAR Orbis. Google WiFi with two units is now last, and the BT Whole Home WiFi isn’t doing that well either. The Linksys Velop with three units is only marginally better, and noticeably behind one- or two-Velop configurations, which is a phenomenon we noticed before. The three-unit systems appear to sacrifice middle distance performance for range, compared to two units.

This phenomenon is further illustrated at 10m, where the NETGEAR Orbi RBK50 is the clear winner, and its RBK40 and RBK30 siblings are comfortably ahead of the rest in second and third. Google’s WiFi with two units is doing reasonably, but the BT Smart Hub has dropped off so that it sits alongside the rest of this month’s contenders around the 40/50/60Mbits/sec mark.

As before, 15m is where mesh begins to show its abilities. The single Linksys Velop has fallen away and the single Google WiFi isn’t faring much better, although it’s still usable. The NETGEAR Orbi RBK50 is way out ahead again, and its siblings are very solid second and third. The Google WiFi with two units is still fourth, but the two- and three-unit Linksys Velop configurations aren’t far behind. The BT Whole Home Wi-Fi is hovering around the same performance, but BT’s Smart Hub has fallen to a merely usable speed.

The 20m result isn’t hugely different to 15m, except that the NETGEAR Orbi RBK40 has taken the lead, with its siblings again strongly in second and third. The two-unit Velop has begun to fall away, so that it is scarcely an improvement over the BT Smart Hub, which is still holding its own. However, BT’s Whole Home Wi-Fi is now ahead of its single-router alternative, neck-and-neck with the two-unit Google WiFi. The three-unit Linksys Velop is now in fourth place behind Orbi.

The main difference between 25m and 20m is that the two-unit Velop has fallen out of range alongside its single-unit sibling and the single Google WiFi unit. The NETGEAR Orbis are still romping ahead, but with the strange result that the on-paper quicker RBK50 is now behind its cheaper siblings. The three-unit Velop and BT Whole Home Wi-Fi are showing their value in fourth and fifth respectively. But two-unit Google WiFi is hanging on well, and so is the BT Smart Hub – another stellar performance for non-mesh WiFi.

At 30m, as before with 3×3 802.11ac, the BT Smart Hub has finally been vanquished. The NETGEAR Orbi RBK40 is still in the lead with its siblings in second and third. The Linksys Velop with three units is fourth again, run closely by the BT Whole Home Wi-Fi, but Google WiFi with two units is commendably still providing a usable signal too.

The 32m result is virtually the same as with 3×3. Only the NETGEAR Orbi RBK50 provides a really decent signal, but RBK40 and the BT Whole Home Wi-Fi are usable, the Orbi RBK30 is unreliable, and everything else is out of range.

Overall, the 802.11ac 2×2 results broadly mirror the 3×3 ones, with NETGEAR’s Orbi RB50 and RBK40 winning on range and performance, but BT’s Whole Home Wi-Fi providing similar coverage at a slower rate, and the Linksys Velop with three units doing almost as well, just falling down at the last 32m shed-related hurdle.

But what if you have an older device that only supports 802.11n? Our final suite of tests now turn to this WiFi protocol.