BT’s second bite of the cherry in this test is a mesh networking product, unlike the Smart Hub. BT Whole Home Wi-Fi promises “Wi-Fi in every room or your money back”, which is the kind of claim we would very much like to verify. 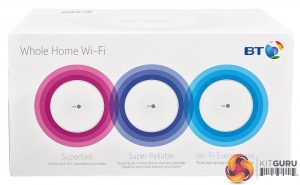 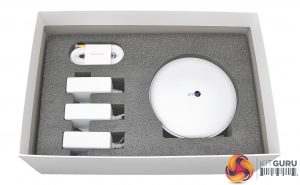 Unlike the Smart Hub, the BT Whole Home Wi-Fi box will not be slipping in through the letter box whilst you’re out. It’s huge. It’s also pretty sturdy, so you might want to use it as storage once the system is set up. Inside can be found three disc-shaped access points, their respective power supplies, and a ribbon Ethernet cable. 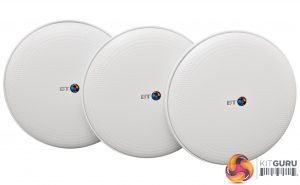 You would be forgiven for thinking that a small alien invasion was occurring when viewing the trio of BT Whole Home Wi-Fi access points together. They look like they should be sitting on their wider sides, but in fact they are meant to sit upright as shown here. 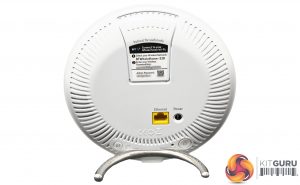 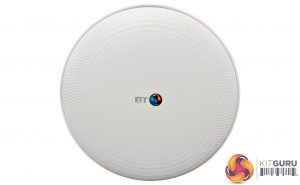 All three access points are exactly the same, with the power connection and a single Ethernet port on the rear side not meant to be seen. The obvious omission is an ADSL modem, so you will either need to have a separate Ethernet-connected modem or use this kit in conjunction with your existing BT Home Hub or Smart Hub. The two satellites not connected to the broadband directly can be used to bridge onto a wired network or connect a wired PC.

Each of the devices only offers dual-band wireless, but the specification is high. The overall rating is AC2600, which is comprised of a 5GHz 802.11ac signal operating at 1,733Mbits/sec plus a 2.4GHz 802.11n signal offering 800Mbits/sec. BT doesn’t make it clear how the backhaul is derived from this, but you will almost certainly have client devices on the same radio as the backhaul, which could affect performance. However, whilst the BT Whole Home Wi-Fi was a similar price to the competition at £299 when it was launched, it can now be purchased for £189.99, which is a bit of a bargain for a three-unit setup – assuming it delivers.