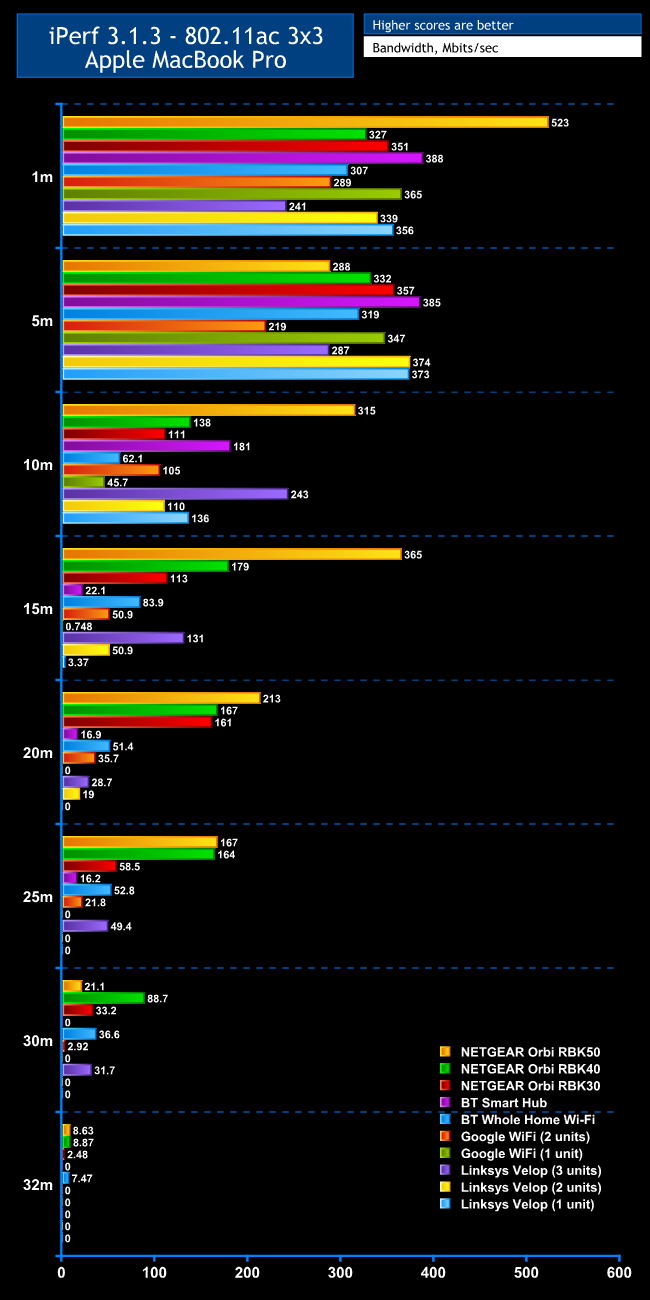 The Apple MacBook Pro’s 3×3 antenna configuration should give it the best possible performance with 5GHz 802.11ac, so we’re starting with the results using this client as the best-case scenario. With 802.11ac, you get a theoretical 400Mbits/sec per antenna, so the MacBook Pro is rated at 1,200Mbits/sec, although in practice you won’t achieve anywhere near this, as our results show.

There’s a clear winner at 1m – the original Orbi RBK50. But a surprising second is the BT Smart Hub, although it’s quite a bit behind. The other Orbis do quite well, as does the single Google WiFi unit, and the single Linksys Velop. The three-unit Velop fares worst. But in reality all these results are quick enough for multiple users in close proximity.

Moving out to 5m, the RBK50 drops noticeably, but it’s still in the same ballpark as the other contenders. The winner at this range is BT’s Smart Hub, although one or two Linksys Velop units run it close. Notably last at this distance is Google WiFi with two units.

At 10m we’re starting to see some notable separation. The client here is on the lower floor, in the kitchen. NETGEAR’s Orbi RBK50 comes out top here again, by some margin, and Linksys’s Velop with three units is now a credible second. The extra range of these systems is beginning to win out. The NETGEAR Orbi RBK40 and RBK30 are doing reasonably well, but so are the Linksys Velop with one and two units, and Google WiFi with two units is holding up too. The BT Whole Home and Google WiFi single-unit option are the losers. The big revelation here is that BT’s Smart Hub came third behind the NETGEAR Orbi RBK50 and Linksys Velop with three units. The performance is still great at 10m, showing the strength of the radios in the BT Smart Hub.

The 15m distance is where the difference between mesh WiFi and single units really begins to show. In previous testing, many single routers will not reach this far, and a previous BT Home Hub 3 we had been using could not provide a reliable signal at this distance. NETGEAR’s Orbi RBK50, on the other hand, is still providing 365Mbits/sec, which is going to be enough for multiple clients streaming HD video, or even 4K if the broadband is up to it. NETGEAR’s other Orbi products are also doing well at this range, particularly RBK40. The Linksys Velop with three units is providing a commendable performance too, but the single Velop or Google WiFi units are completely failing. Even the BT Smart Hub is struggling, although 22.1Mbits/sec is still usable for browsing and video consumption. BT’s Whole Home Wi-Fi is starting to show the capability of it’s three-unit relay, whilst Google WiFi and the Velop with two units are providing decent if not outstanding performance.

At 20m the NETGEAR Orbi RBK50 is still king, and the other Orbis are also head-and-shoulders ahead of all else. BT’s Smart Hub is STILL providing a usable signal, however, which is amazing for a keenly priced router. BT’s Whole Home Wi-Fi and Google WiFi with two units are holding their own, but the Linksys Velop with one unit has dropped off completely, whilst the two- and three-unit options are only marginally better than the BT Smart Hub.

The 25m distance really shows where a mesh can provide range benefit. The NETGEAR RBK50 and RBK40 are way ahead again, but RBK30 has dropped off considerably. Amazingly, the BT Smart Hub isn’t much weaker than it was at 20m – another incredible result. However, the BT Whole Home Wi-Fi is still going strong, as is Linksys Velop with three units. Google WiFi with two units is usable, but only marginally better than the BT Smart Hub. The single Google WiFi unit and Velop with one or two units are now out of range.

At 30m, strangely, the NETGEAR Orbi RBK40 really nailed the test, and the RBK50 was noticeably behind, with even the RBK30 beating it. We retested this and achieved similar results. The BT Whole Home Wi-Fi and Linksys Velop with three units were also ahead, and the BT Smart Hub had finally dropped off completely. The Google WiFi with two units was still receiving a signal, although not a very reliable or usable one. Everything else was now out of range.

With the 32m range, the client is also behind the garden shed, so although the distance isn’t much greater, the obstruction adds difficulty. The NETGEAR Orbi RBK50 and RBK40, plus BT’s Whole Home Wi-Fi, are the only systems able to reach this distance usably. Even the Orbi RBK30 is struggling, and everything else failed.

So, overall, with the Apple Mac Pro, NETGEAR’s Orbi RBK50 and RBK40 win the range test, whilst BT’s Whole Home Wi-Fi provides similar (but much slower) coverage, and the Linksys Velop with three units fares commendably well too. The biggest revelation is just how far the BT Smart Hub can reach.