To test the MasterKeys Pro S White, I used it as my daily-driver for over a week. During this time I used it to write reviews, play games and edit photos.

First off, it is worth saying that the MasterKeys Pro S White does not come with any software – everything is controlled directly from the keyboard.

Cooler Master have implemented a straightforward system for adjusting things, too, so the on-board control is successful. For example, you can use Fn+F2 and Fn+F3 to control the backlight brightness, while you can also change the repeat rate of the keyboard using the F5-8 keys.

Recording macros is also straightforward: first press Fn+F11 to begin the process. Next, choose which key you wish to map the macro to (the available keys flash blue), and then the macro can be recorded. Fn+Esc ends the process.

It is also worth noting that multimedia keys are placed on the INS/HOME/PAGEUP keys above the arrow keys.

All-in-all, the on-board control system works well. It is never ideal to have multiple functions assigned to each key, but for users who really want a TKL keyboard, it is a necessity. The way Cooler Master have done things is also very simple, and the manual details all the necessary instructions should you get confused. 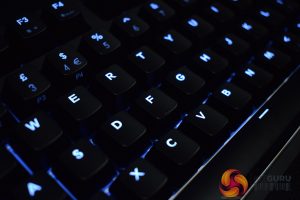 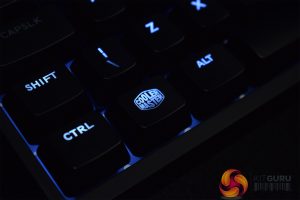 Note: The backlight only looks blue in the images above due to the nature of photographing a white light. In person, they are perfectly white.

Moving on to the lighting. The MasterKeys Pro S White has white-only LEDs – as the name suggests – but that is not to say the lighting is boring.

Pressing Fn+F4 lets you choose from a number of different lighting effects, such as ‘reactive', ‘wave', ‘breathing' and so on. There are also 7 brightness levels (including off), and the brightest of these is very bright – I actually found it a bit painful to use!

What impresses me most with the lighting, however, is just how white the LEDs actually are. Usually, if you set a RGB keyboard to display a ‘white' light, what is actually produced often has a blueish or even pinkish hue, as RGB LEDs cannot properly display a white light. Cooler Master's LEDs are true white, though, so the backlight is very clear and strong. The white baseplate below the keys also helps the light to spread out across the whole of the board.

My only complaint with the lighting steams from the fact that the Windows key has been replaced with a Cooler Master logo. Given that the LED is above the switch, but the logo takes up most of the key-cap, the bottom of the logo is noticeably dimmer than the top (as you can see above). It is a very minor issue but it does mar the overall look of the keyboard when the backlight is turned on.

Moving on to physical testing – I greatly enjoyed typing with the MasterKeys Pro S White. Cherry MX Blue switches are my favourite – although it is slightly strange that I was sent a keyboard with Blue switches when Cooler Master only sell keyboards that use Brown switches in the UK. Personally, I like the tactile feedback offered by the Blue and Brown switches, but I would like to see Cooler Master offer a Red variant as well – many gamers prefer the faster, linear action so the decision to only sell Brown-switch variants is a bit strange if you ask me.

Build quality of the keyboard is excellent, however. The outer-shell is plastic but there is a metal slab inside the keyboard which adds some heft and definitely some rigidity. I can safely say the MasterKeys Pro S White would last a long time, and it would be able to withstand a good amount of bashing, too.

However, I must mention one last negative point. The supplied USB cable is simply too short – at 1.5m metres, it could not reach my PC (on the floor) from my desk. This is actually something we mentioned in the original Pro S RGB review (HERE) so it is disappointing that Cooler Master have not lengthened the cable. It merely needs to be 30cm longer to be able to fully cater to everyone.