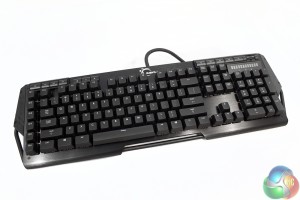 The board itself is black with a brushed aluminium chassis and plastic edging. There is also an external metal frame-work of pipes that runs around the circumference. This is used to clip on extras such as the key-cap case, as well as provide stability and carry grip-points. 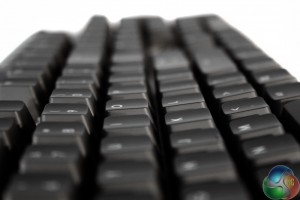 The key caps are quite typical of this type of board, with the usual slightly concave structure and clear-plastic lettering which lets the backlighting do most of the work of telling you which letters and numbers are which. 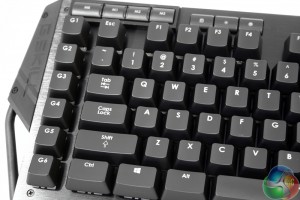 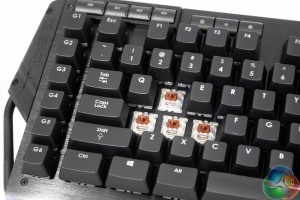 Underneath the caps are the Cherry MX Brown switches, though this type is the same as the ones we saw in the Corsair Gaming Vengeance K70. In-fact much of that design can be seen in this board, from the media keys to the brushed aluminium body. Perhaps they are made via the same OEM partner… 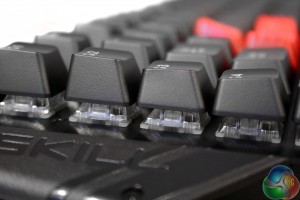 The clear plastic body of these Cherry switches are designed to mitigate one of the main problems with this switch type. Unlike some of the new mechanical switches produced by Steelseries and Logitech, which have the LED mounted in the centre, Cherry’s MX switches mount the LED at the ‘top’ of the switch. While that does provide backlighting, it means that the intensity of it is off-centre, so keys with multiple functions cannot always light up every part of them evenly.

This is more of an aesthetic problem, but it can be fixed by relocating the LED, or in cases like this, using a clear-plastic housing for the switch, which is what G. Skill has opted to do. 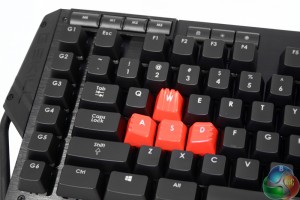 That said you do not have to use the default key caps with this board, there are also those few extra ones that came in the neat carry case. They are more slanted than regular keys, which makes me wonder how well you would be able to type with such caps installed. We shall have to investigate further.

It is also noteworthy at this end of the Ripjaws keyboard, that there are six macro keys added to the edge, allowing for quick access to additional functions. 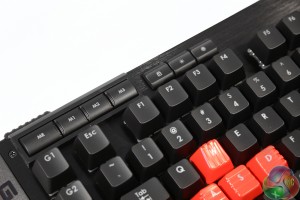 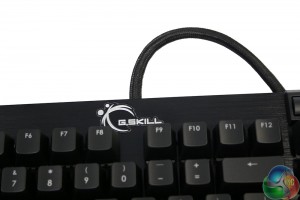 At the top of this board there are four more switches, used for changing keyboard profiles. The first however allows for the quick recording of new macros for future use. They are a different kind of key to the rest of the board, and have a much spongier texture. You would not want to type on them, but of course you are unlikely to use these buttons more than once in a while.

In the centre of the top of the board is the G Skill logo. It is more like a sticker than an embedded logo which is a shame, but it does not stand out too much to be an annoyance. 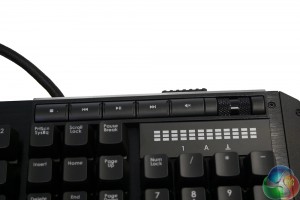 At the other end of the board we have the volume control and media keys – again, looking much like the set up on the K70 keyboard. These are the same button types as the profile switches and they occasionally get stuck when you press them down. Nothing a good wiggle cannot fix, but it is a mild annoyance.

The volume control however is simple and easy to use, operating much like a mouse scroll wheel. Underneath it is an LED indicator of volume, letting the user easily see how much more headroom they have, without resorting to on-screen icons. 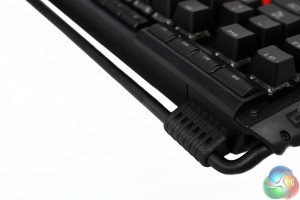 Around the back of the KM780 is more of that metallic piping, which provides adequate room to attach the replacement key-cap casing. 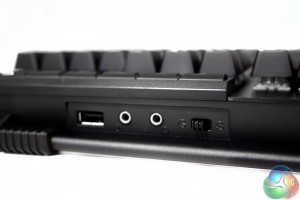 It is also where you will find the USB pass-through port, for those wishing to plug-in headphones, a mouse or any other USB device for simple connectivity. There are also headphone and microphone ports and a small switch, which is used to switch between standard six-key rollover and N-Key rollover, which allows for any number of keys to be pressed – and more importantly, registered – at once. It is a little confusing, the “G” is for N-Key rollover and the “S” for “standard.” 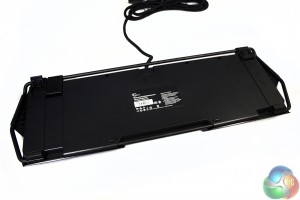 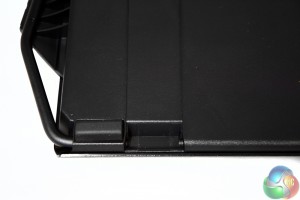 The underside of this keyboard is as black as the top, and has a number of rubber feet to keep the board in place at all times. 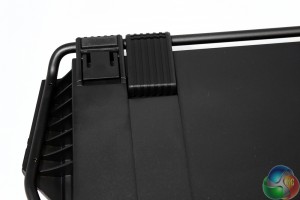 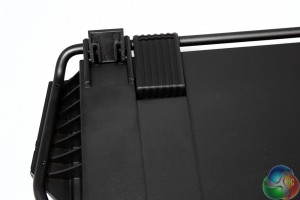 However if you prefer the keyboard slanted at a sharper angle, you can flip-up these extender feet. Unfortunately they do not have any rubber feet of their own. 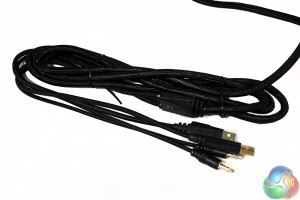 The cable for the KM780 is braided to a high standard and the connectors have a gold-plated finish. As well as making them look more fancy, this can also improve durability of standard nickel-plated headers. 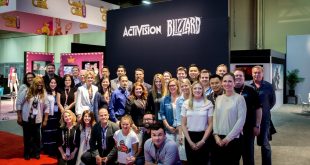