Earlier this year Intel Corp. unveiled its new strategy designed to boost interest for desktop computers in general and for high-performance desktops in particular. So far the company has outlined a number of initiatives and there are several more to come. At the Computex 2014 trade-show Intel, Samsung Electronics and other partners announced a plan to greatly reduce the price of ultra-high-definition displays and PCs with UHD monitors.

One of the best ways to improve user experience is to improve visual and multimedia experiences, for example, by increasing a display resolution. The ultra-high-definition (UHD) is clearly the next big thing for multiple industries (video, gaming, imaging, etc.), but to support such resolutions high-performance personal computers with advanced graphics cores are needed. Since at present displays with 4K (3840*2160) resolution are pretty expensive, only select people buy them. As a consequence, the demand for high-performance PCs remains on a relatively low level. Being the world’s largest microprocessor maker, Intel clearly wants to change that. 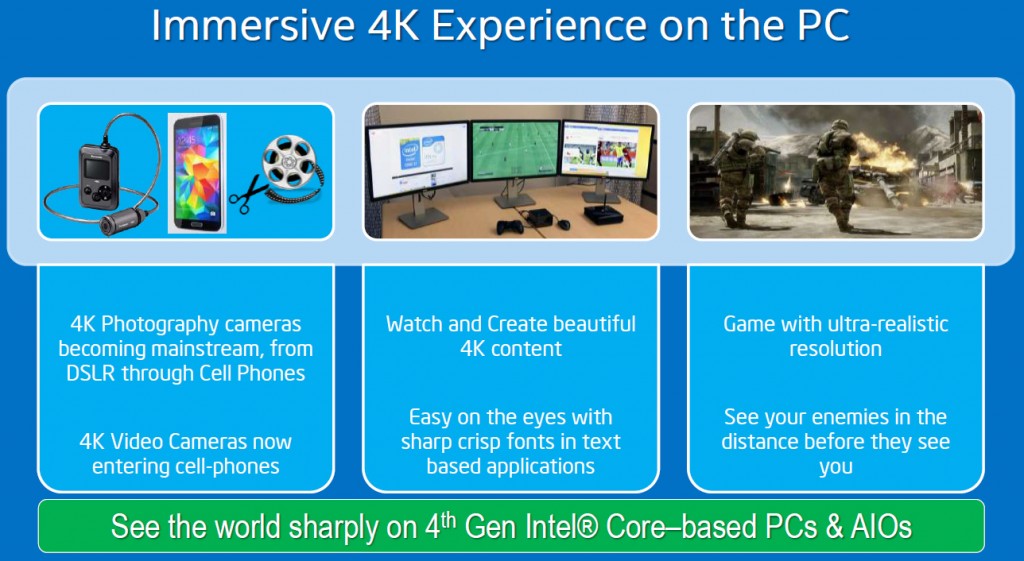 At the Computex trade-show Intel and Samsung announced plans to release a 23.6” 4K display priced at $399 (approximately £238 or €292; readers in the U.K. and Europe should add VAT) by the end of the third quarter. The Samsung monitor will use a PLS [plane-to-line switching] panel, will support the UHD resolution at 60Hz refresh rate, will feature 100 per cent sRGB colour gamut and will be Technicolor-certified. Later on there will be reasonably priced 4K displays from other companies, including TPV and ViewSonic.

Separately, Intel announced at the show that several PC makers, including EVS, Hibertek, Mitac, MSI, Loop and Wibtek, plan to release their inexpensive Intel Core-based all-in-one (AIO) PCs with 4K/UHD displays that will start at $999 (approximately £596 or €733; readers in the U.K. and Europe should add VAT). 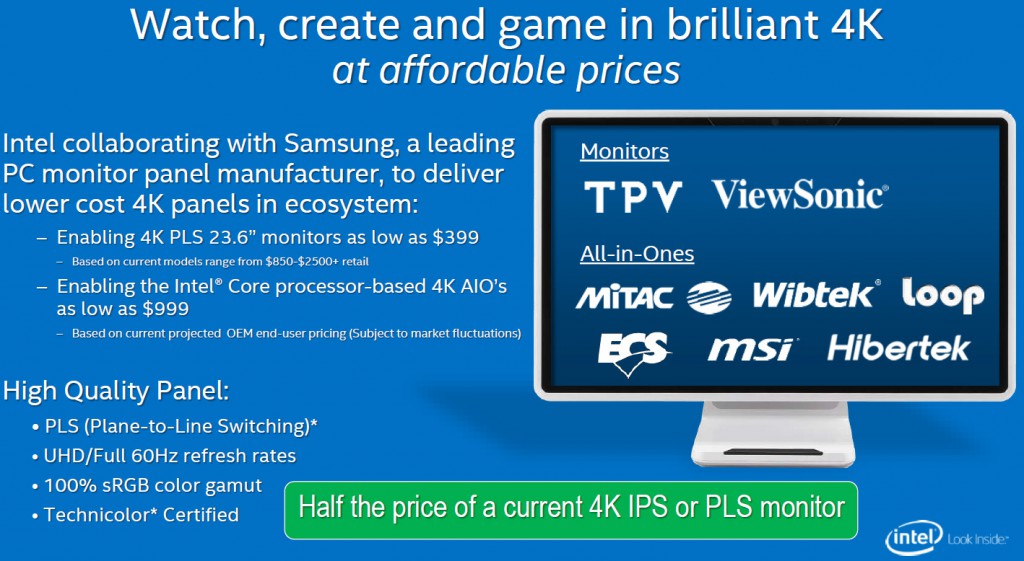 While Intel clearly deserves a praise for its initiative to bring UHD displays to the masses, it should be noted that many industry-wide initiatives of the world’s largest chipmaker do not really work very well. For example, the company has been trying to make notebooks thinner for years now, but many components of ultra-thin laptops are still too expensive for the mainstream market.