Kicking things off with our gamut testing, Philips claims 125% coverage of the sRGB space, and 95% DCI-P3. Our Spyder unit doesn’t report values over 100% sRGB, but we can see 94% reporting for the P3 colour space. A strong start.

Up next is our luminance uniformity, and here we do see a little bit more deviation than I would like, with the top left corner being particularly aberrant. We would expect a bit more variation than usual considering the sheer size of the panel, and subjectively speaking the difference wasn’t noticeable to my eye.

As for colour uniformity, again there is some deviation here, particularly on that left side of the panel. If you were using this screen for high-fidelity image or video work, it’s possible this would be a problem. However, that is just not what this screen is for, and again it’s not something I noticed during regular use, so I don’t think we knock the 558M1RY too much here.

Peak brightness is highly impressive, hitting almost 790 cd/m2 while dropping as low as 109 cd/m2. This is also a VESA DisplayHDR 1000 certified monitor, so we can expect spikes to 1000 cd/m2 when used in HDR mode, but this isn’t something we can test with the Spyder.

Contrast is also very strong as we would expect from a VA panel, hitting a 3440:1 ratio at 100% screen brightness. This gives the screen a very ‘punchy’ look to it when gaming, and is a definitely strongpoint for the 558M1RY.

The white point is also pleasing accurate, hovering close to the 6500K standard at every brightness setting tested. At 100% it measures 6900K, meaning the panel is ever so slightly cool, but the difference is very marginal compared to 6500K.

Up next is gamma testing, and here the screen has 5 options, each of which should directly correlate to a gamma reading – starting at 1.8, and going up to 2.6. Based on our testing, the 1.8 and 2.6 options are accurate – gamma readings using those options do come in at 1.8 and 2.6, respectively. However, the rest of the options report a gamma value 0.1 higher than it should be. Gamma 2.2, for instance, is reported as a value of 2.3.

This isn’t ideal as it means none of the settings can actually hit a gamma reading of 2.2, which is the standard value for monitors.

Lastly we have overall colour accuracy, with the screen reporting an average Delta E of 1.92. This is a decent result, and although not jaw-dropping in its accuracy, we have to remember this is a gaming display, and one designed for living room at that – so it was never going to come in with colour accuracy matching professional screen.

After calibrating the panel, we can see a slight reduction in DCI-P3 coverage, down 3% from our initial test. Brightness has also come in slightly higher, hitting 816 cd/m2, though peak contrast is now 3260:1. Pleasingly, the panel’s white point is now spot-on at 6500K, when at 100% brightness.

Gamma remains slightly out, however, with Gamma 2.2 still reporting a value of 2.3. Overall colour accuracy has improved significantly, with a new average Delta E of just 0.97. For a gaming display, this is an excellent result. 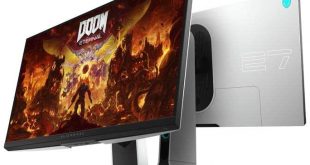 This week, a leaked PDF has given us some early details on Alienware’s future gaming …