The most obvious downside to any TN monitor is relatively poor viewing angles, and sure enough it’s the first thing you notice with this display. However, they’re far from the worst we’ve seen.

Turning the display from right to left there’s very little change in the image. Rather, it’s when tilting it up and down you see a noticeable lightening and darkening of the image. Crucially, though, you only get the total deterioration of image quality (where colours almost seem to invert) when viewing it from far higher or lower than you ever would. 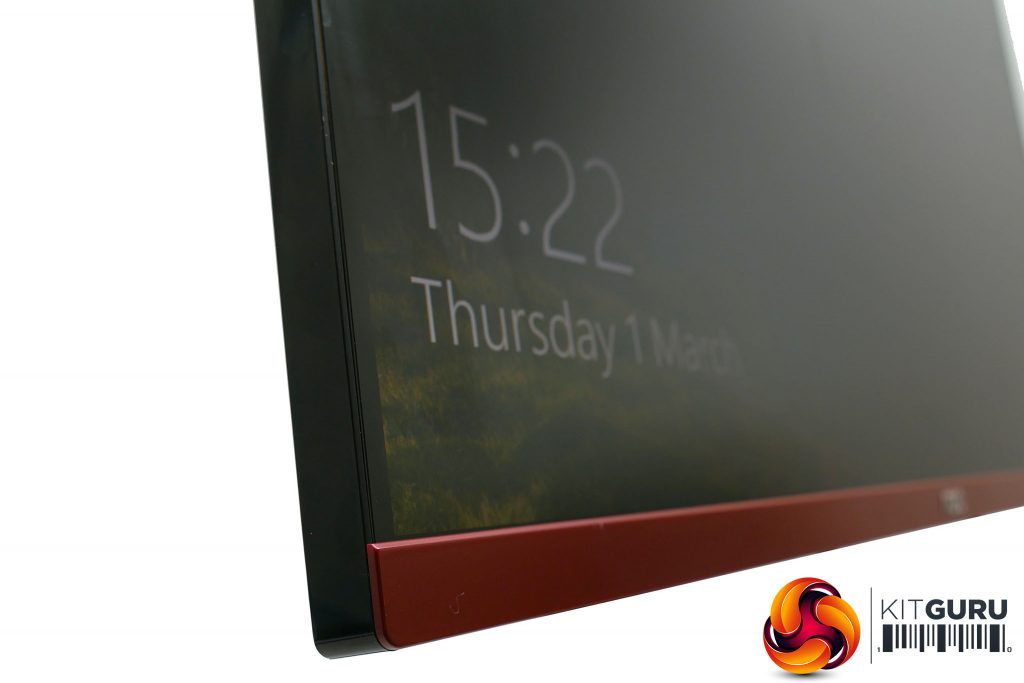 In day to day use it’s hardly noticeable except when it comes to light grey colours, such as around Word documents, the scrollbars in several apps and the backgrounds for many a website. Because of the subtleness of the colours, even a slight change due to viewing angles is noticeable. As such you can end up with almost a shimmering effect as the grey colours subtly change as you move your head. This is typical of mid-range and lower quality TN displays, though the very best such as the Asus PG278Q suffer far less from it.

Otherwise this display presents a colourful, rich image that has a nice strong contrast between the lightest and darkest elements. Colour balance also looks good, and generally the image is up to snuff.

This general first impression is reflected in our test results too. We tested the display with the Xrite iDisplay Pro, using the DisplayCal software, as well as the ColorMunki Spyder5Elite with its own software. The ColorMunki is generally better for reporting most things but tends to underreport contrast, so we rely on the iDisplay Pro for that.
Starting with the latter, this display puts in an impressive performance, managing a contrast ratio of 1144:1. You can’t get much better than this for a TN display, and in fact many dip well under the 1000:1 mark and can look a bit washed out as a result. 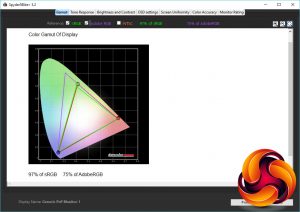 Moving on to the Spyder5Elite’s tests, it starts out by testing how much of the standard colour spaces the monitor can cover, with top quality displays ideally achieving 100% sRGB. The G2790PX’s score of 97% is decent for a gaming display.

Next up is the display’s uniformity and here this display does okay. A maximum variance of 10% is not great but far from the worst, and on average it only wavers by 5.9%. Colour variance is also adequate with just a 1.76% variance. 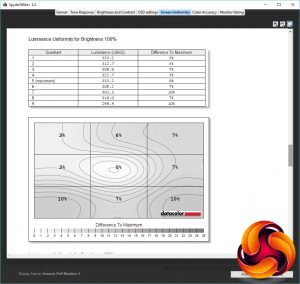 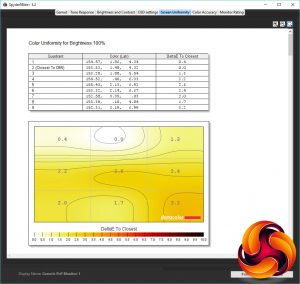 Moving onto the brightness and contrast test, we can see there’s a nice even rise in brightness as you crank up the OSD brightness settings – some displays are far less linear. We ignore the contrast results for this test as the Spyder5Elite doesn’t report them correctly. However, the white point scores show the display is reasonably close to the desired 6500K colour temperature across its brightness range. 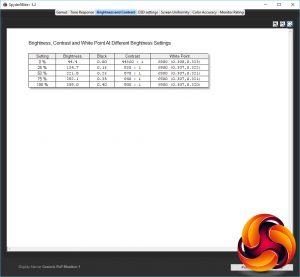 The next test measures the same criteria but using the display’s various OSD defaults. Here we can see that the default Warm option is the best of the bunch, with the Normal, Cool and sRGB options all having white points that are too high, resulting in a blue tinge to the image. Meanwhile, opting for the User colour mode provides a good basis for fine tuning the display to get the best from it. 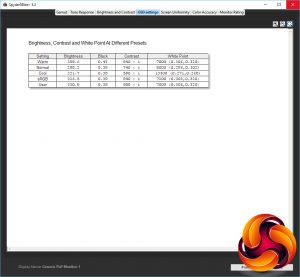 This display offers three gamma options in its OSD, which are simply labelled gamma1, gamma2 and gamma3. In the next test we can see that the default gamma1 setting results in a gamma of 2.5, which is quite a bit higher than the 2.2 we’d hope for. Instead gamma2 is the one to go for, if accurate colours are your main concern. The gamma3 option is even higher than gamma1, hitting 2.6, resulting in an even darker looking image. 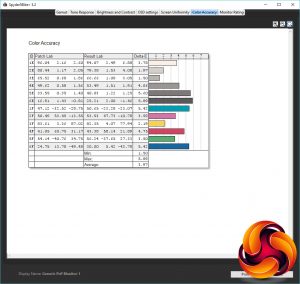 The Spyder5Elite’s final test checks for the display’s ability to pick out fine differences in colour as represented by a number called the Delta E. Anything below 3.0 is good while below 1.0 is excellent. This display managed an average of 3.97 and a maximum of 5.89, so it’s clearly no photographers dream but it’s okay for general use.

Next up we calibrated the display using the Spyder5Elite’s software and although most of the tests showed no significant change, the colour accuracy did improve. The average Delta E score dropped to 1.97, though the maximum was still above 5.0. 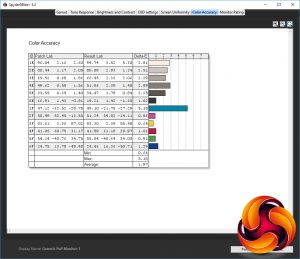 All in all, this is largely a fairly typical TN gaming display. Colour accuracy and overall image quality are not its strong suits so for anyone that values these qualities most, it’s not the best option. But, for general use, and of course for gaming, it’s okay.

That said, there was one surprising issue we detected with this display, is that when scrolling through text the letters go so blurry as to almost seem to disappear while they’re in motion. It’s the sort of effect we normally associate with slow pixel response times, particularly with VA monitors, so it’s a surprise to see it here.

When it comes to gaming, the AOC G2790PX was more than up to the task, though again only when the overdrive was turned up. In fact, its large 27inch screen size and low 1080p resolution actually work to its advantage in competitive games where it’s all about seeing your opponent first.

Turning the overdrive setting off and there’s a definite softness to the image when in motion, so you’ll want to crank this setting up to at least medium both for desktop use and gaming.

As for Freesync, it does its job nicely, smoothing out tearing and stutter for those that have a matching AMD graphics card. Overall, it’s a solid option for gaming but not one that blows us away.