To test the Model O-, I used it as my daily driver for almost two weeks. We break down testing into four main sections: software, lighting, build quality and comfort, and performance.

The Model O- uses exactly the same software suite as the bigger Model O, and you can download it directly from Glorious here. It’s a pretty basic software suite, with all the options presented on a single page, but there are a number of drop-down menus on the right hand side which offer various customisation options.

Firstly, you can configure up to six different DPI stages in steps of 100, and assign each stage a different indicator colour. After that, there is control over the RGB lighting with a number of different presets to choose from, while LOD can also be adjusted from 2mm to 3mm depending on your preference.

Additionally, there are options for polling rate – 125Hz up to 1000Hz – as well as a debounce delay option for the primary buttons. On the left hand side of the page there are options to remap the mouse’s buttons, and you can also record macros from within the software.

Overall, this isn’t as polished an experience as you’d get from Razer Synapse or Corsair iCUE, but the fundamentals are there with DPI and LOD options. On top of that, the Model O does have on-board memory so the software can be used once and then uninstalled if you’d rather not have it on your PC. 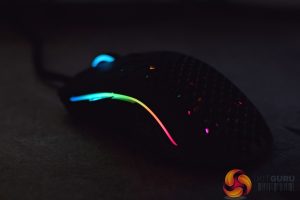 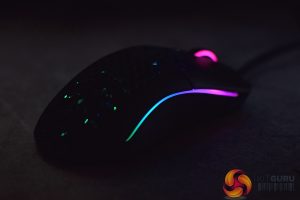 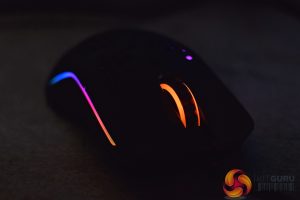 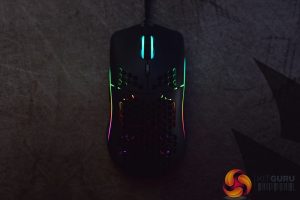 Lighting for the Model O comes from three zones – one LED strip on either side of the mouse, and then the scroll wheel. I do think it looks good, particularly when the lighting bleeds through the honeycomb holes on the top of the shell – it’s an appealing aesthetic. On top of that, the LEDs are fairly bright and the colours look good, so I can’t really complain here. You can of course turn the RGB off if you want to – some might even go as far as removing the LED diffusers to reduce the weight by a couple of grams – but for most people the RGB lighting will be plenty sufficient.

In terms of build quality, there are always going to be question marks around a mouse which weighs just 58g, not to mention the fact that almost the entirety of its top shell is filled with holes. Based on my testing with my sample, build quality is surprisingly good, but there are a couple of points to mention.

Firstly, I can notice the top of the shell bending slightly when I push down with some force just below the the DPI button. Structurally, the Model O- is just never going to be as solid as a mouse weighing 90 or 100 grams. That said, during normal game play I didn’t notice this at all, it’s only when I deliberately apply pressure to that area, so this not a big concern for me.

Another similar point to mention is actuating the side buttons by squeezing in the side of the shell. This is something I can do on the regular Model O and the same goes for the O-. I don’t see it as a big issue though, as you have to apply significant pressure to the sides of the mouse, which is simply not realistic for normal use, but it is something worth noting.

Other than that, there’s no noticeable scroll wheel rattle with my sample and nothing else stands out as a negative for the mouse. Again, it’s not going to be as sturdy as something like the G502 but it’s not a weak mouse either.

As for comfort, this is really the area which will determine whether you should buy this mouse or not. It may sound obvious, but this is a very small mouse so it’s really only suitable for specific grip types – primarily, this is an ideal fingertip mouse as it’s just so small and only weighs 58g. Then again, I find claw grip (my go-to grip) uncomfortable as the base of palm can’t really rest on the bottom of the mouse as it’s both too short and too flat. Similarly, unless you’re a young child, palm grip is just going to be impossible here.

That isn’t to say the shape or design of the mouse is bad – it’s just only going to suit a certain number of people. Personally, it’s not the ideal shape or size for my use – I’m still using the Endgame Gear XM1 – but if you know you’d get on with a mouse this small, then it could well be just what you’ve been looking for.

Moving onto performance, we’ll start with the primary buttons. These use Omron switches rated for 20m clicks, and they are definitely good buttons but they’re not class-leading. The switch actuation is quite tight and crisp but there is just a hint of button post-travel which adds a little mushiness to the overall feeling. It’s still very easily to do some rapid-fire clicks, but I found the overall tactility to be just lacking slightly due to that shell post-travel.

As for the side buttons, these are very good with minimal pre- or post-travel and a light actuation. The side buttons are using Huano green switches and I don’t tend to use them too much in-game, but with the Model O- they are easy to press and feel great, so no complaints there.

Much the same can be said for the scroll wheel. This has well-defined steps but it’s easy to flick it up or down, and clicking the wheel down is also slightly easier than with other mice like the XM1 or Logitech G305. The ribbed rubber wheel is also very easy to keep a hold of, so this is a definite strong point for the Model O-.

The Model O- uses the PMW 3360 sensor, and as expected it was flawless during my testing. There’s no noticeable acceleration or jitter from the sensor and it tracked perfectly when doing some fine editing in Photoshop at 400 DPI. I couldn’t get the sensor to spin out, either, so while this isn’t anything we’ve not seen before with a 3360-based mouse, it’s always good to know you’re getting the best experience.

Following on from that, LOD is set to 2mm by default and at that setting the mouse wouldn’t track when sat on top of 1 DVD. Raising LOD to 3mm meant the mouse would track on top of 1 DVD, but stopped tracking on top of 2 DVDs. That’s good behaviour from the sensor and it’s good to see Glorious has included the option to adjust LOD depending on your preference.

Finally, we’ll touch on the ‘Ascended Cable’. This is a shoe-lace style cable similar to the DM1 FPS and it is generally very good. It’s flexible, easy to whip around and it doesn’t drag on my Corsair MM350 mousepad, so it’s very easy to get on with and is a definite upgrade over a standard rubber cable. The only thing I would say is that the cable’s weave is relatively loose, so the cable is on the thicker side. That said, Glorious has actually updated the cable to give it a tighter weave for future batches, starting from the November/December batches. I can’t comment on how this would improve things as my sample is an older batch, but even with my sample this is still a very good cable.