Since the AOC I1601FWUX doesn’t run off a separate power source we can’t perform our usual power draw measurements. There’s also little point checking its thermals as it produces so little heat that it wouldn’t melt ice cream. And as the I1601FWUX’s speakers are notable only be their absence, it’s time to dive straight into the image quality side of things.

To start with, we perform an overall, visual assessment of the monitor on our test bench. This includes judging general performance under a variety of scenarios and checking for issues such as damaged pixels or backlight bleed. For a more detailed and objective evaluation, we use an Xrite i1 Display Pro with DisplayCAL and CalMAN Colour Checker software to assess the panel’s contrast and colour performance, uniformity, and image quality.

Please keep in mind that these results should only be used as a guideline: not only is every panel different to some extent, but a number of factors such as environment temperature – and many others – can also affect measurements. 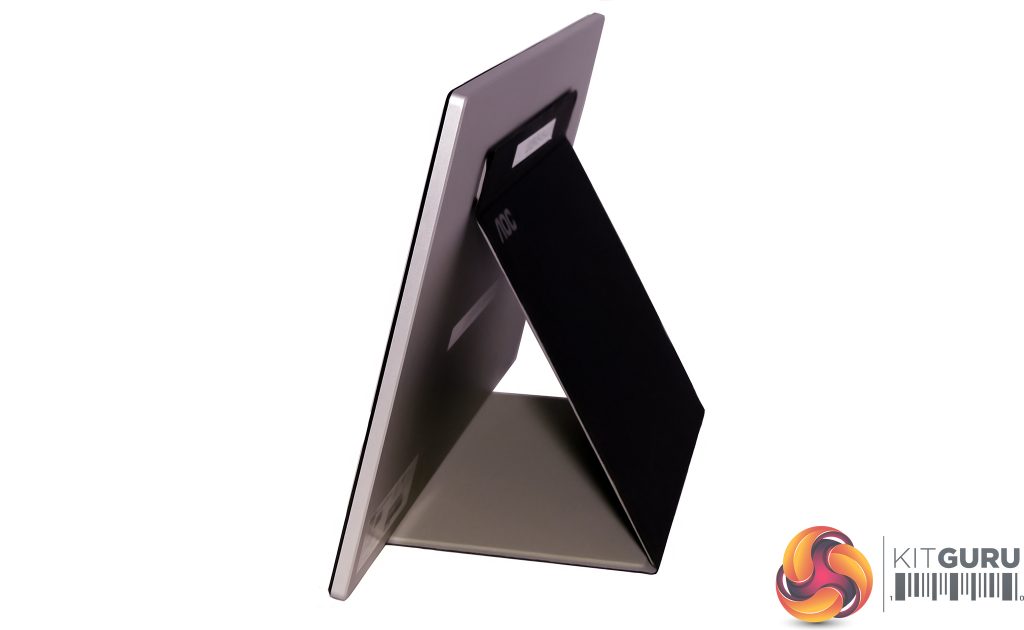 As one of the I1601FWUX’s image quality highlights, AOC claim that the monitor’s WVA (Wide Viewing Angle) IPS panel gives “real color at any angle”. Leaving aside the philosophically intriguing notion of what fake colour actually looks like, we found the I1601FWUX to indeed offer exceptionally good viewing angles, with almost zero colour shift even at extreme angles – a challenge that most LCD displays fail to complete. So bravo AOC.

Unfortunately, the excellence in viewing angles does not extend to contrast. Entertainment lovers will also be sad to hear that, while backlighting appeared very even to the eye, blacks didn’t have much depth to them – not helped by the common IPS glow rearing its shiny head – suggesting our contrast measurements won’t yield impressive results.

And in a further dent to its movie and gaming display credentials, even when viewing from the ideal angle and regardless of its brightness setting, the I1601FWUX does also crush some shadow detail. 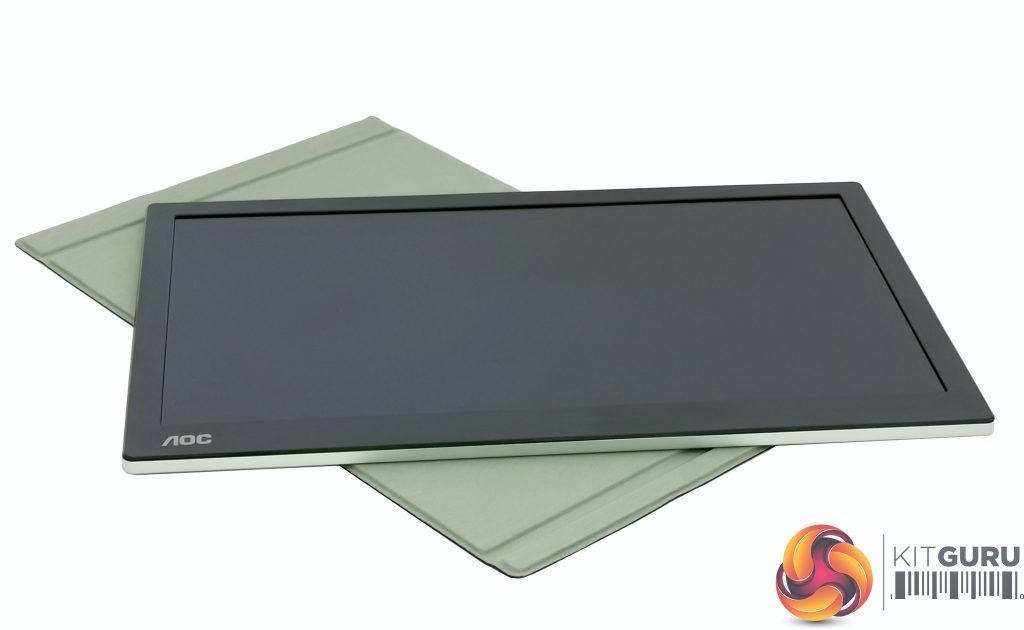 Getting to a few highlights, the I1601FWUX’s native 1920 x 1080 resolution might seem low in this age of high-density laptop and tablet displays, but at a size of 15.6 inches everything actually looks plenty sharp. Likewise while subtle gradients aren’t as smooth as on an 8-bit display, it’s not really something you’d notice too much for daily use.

AOC’s choice of glossy bezels does mean there are some annoying reflections, but at least the panel’s semi-matt coating ensures they’re mostly at the periphery without dulling colours. And it’s also worth pointing out that there was no sign of backlight bleed or other artefacts to ruin your viewing pleasure.

Maximum brightness measured a mere 199 cd/ m2 (a unit of luminance also known as nits), which is pretty close to AOC’s official 220 nits spec. This does mean readability in particularly bright light – like direct sunshine – might be an issue, but to be fair to the I1601FWUX it’s no different from most USB-powered portable monitors in this regard, and in fact goes a fair bit brighter than candidates like the ASUS ZenScreen MB16AC. It also provides a fairly comfortable minimum brightness of 16 nits, great for reading or working in dimly-lit environments. 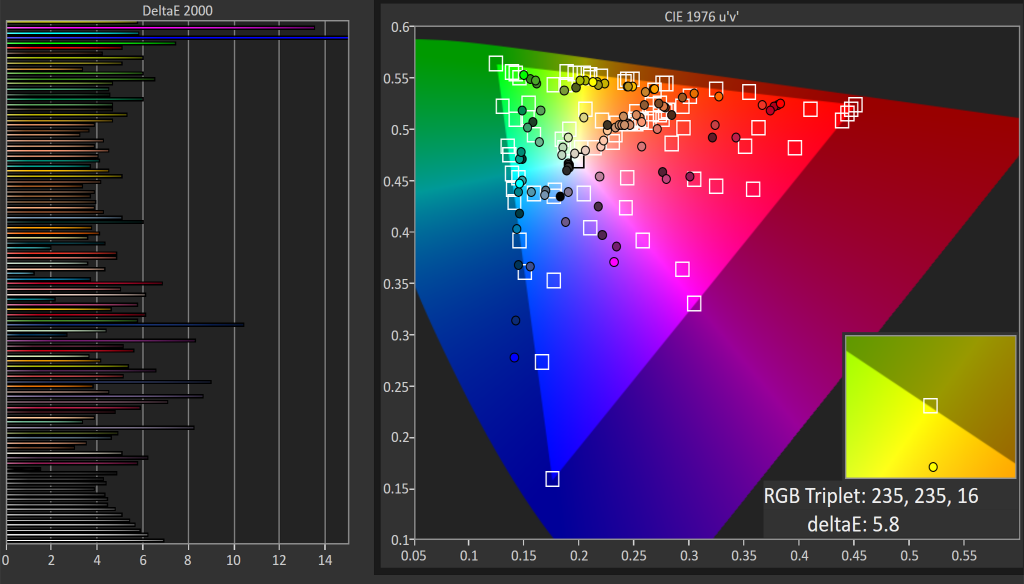 We performed all measurements around our preferred calibration target of 120 nits, as the I1601FWUX doesn’t have the ability to reset to factory settings or select any image presets. Our impressions regarding contrast were verified with a singularly unimpressive 565:1 figure, thanks to an unenviable 0.22 black level (lower is better; just for reference most quality IPS or VA monitors give around 0.13 or less).

Colour temperature was also way too cool at around 7483K, which is a far shout from the 6500K ‘daylight’ ideal. Only gamma of 2.24 was pretty much spot-on compared to the 2.2 standard for SDR monitors.

It seems to be a worrying trend among portable monitors to have not just low brightness but also low colour gamut. Perhaps this is a sacrifice to their frugal energy requirements; regardless, AOC’s compact display managed only 54 percent of the basic sRGB colour space, which is one of the lowest figures we have ever measured.

Nor did things improve much when it came to colour accuracy: for Delta E 2000 we measured a pretty decent average of 5.2, but again we got one of the worst figures we’ve measured when it came to the maximum error, with a whopping dE 30.1 across some blue and purple values. Combined with all the above issues, the AOC I1601FWUX is definitely not a monitor we would recommend for any kind of critical colour work. 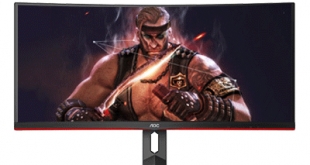