A Steam Greenlight dev had a bit of a meltdown

Now we’ve seen indie developers lash out at the gaming community before, Phil Fish has ‘quit’ Twitter several times and cancelled Fez 2, other developers have censored criticism of their own games with DMCA takedown notices on YouTube and now the developer behind Dark Base 01 has decided to use his store page to insult the Steam community.

If you happened to come across the store listing yesterday, the game’s page had been retitled to ‘Nothing to See Here’, the screenshots and trailer have been removed and in its place there is a picture of a turd alongside a rant at the Steam community. 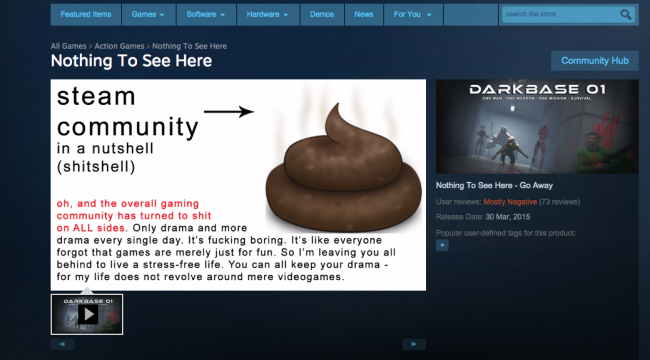 You can read the whole rant in the above image but the jist of it is, the developer behind Dark Base 01 wasn’t happy with the negative reviews on his bad game. He then goes on to say that the gaming community has “turned to shit” due to all of the drama.

The game is no longer for sale on Steam although the original Greenlight listing is still up.

KitGuru Says: There is definitely a problem with Steam Greenlight as we constantly see bad games voted on to the Steam store, then people complain and there are developers our there that can’t handle that criticism very well. Just another sign that Valve should start curating the Steam store once again.