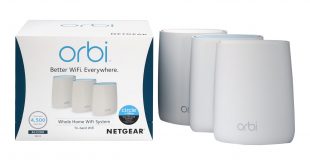 NETGEAR kicked off the spate of mesh networking systems we have seen over the last couple of years with the Orbi RBK50. Since then, many more alternatives have passed through our test benches, many of which we covered in our Ultimate Mesh WiFi Router Shootout. Whilst the RBK50 remains the gold standard for performance, it also remains pricey, and the units are bulky. So NETGEAR has introduced a smaller, more modestly priced option, available as a two-unit (RBK20) and three-unit (RBK23) bundle.

Whereas the original RBK50 was AC3000 rated, the RBK20/23 only offers AC2200. However, unlike ASUS's Lyra Trio, this isn't because of a drop to a dual-band radio configuration. The RBK20/23 units are still tri-band. However, whilst the 2.4GHz radio still offers 400Mbits/sec of bandwidth, now both 5GHz radios use 866Mbit/sec, whereas the RBK50's backhaul 5GHz radio operates at 1,733Mbits/sec.

There are also two fewer antennas – four instead of six. So whilst the RBK50's backhaul uses 4×4 antennas, the RBK20/23 has to make do with 2×2. But this is still a dedicated backhaul, with separate 2×2 antennas serving the 2.4GHz and 5GHz radios for client devices. 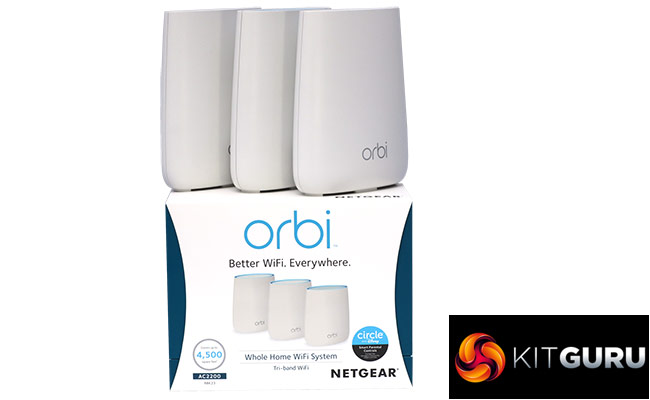 Since the units are smaller physically as well, each one only has space for two Gigabit Ethernet ports. On the router unit, one of these will be used to connect to your broadband. But the satellites can support two Ethernet devices apiece. You also lose the USB port on the original RBK50, although this wasn't operational when we first reviewed it.

The upside of the reduced specification is that you can pick up the two-unit RBK20 for under £200, and the three-unit RBK23 we were sent is £280, just £30 more than the two-unit RBK50, and £120 less than the three-unit version of the latter, the RBK53. So if you need excellent home WiFi coverage at a keener price, the RBK23 could be the NETGEAR Orbi for you. We put it through its paces to find out.