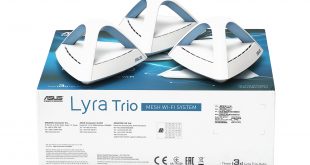 Mesh networking was a fairly specialised concept a couple of years ago. But now products are arriving on a regular basis, and ASUS is even on its second range after the original Lyra that we reviewed last year. The Lyra Trio builds on the excellent capabilities of the original Lyra, but throws in a healthy dollop of style in a similar vein to the ASUS Blue Cave. However, the Trio is as different from the original Lyra under the hood as it is in appearance.

This is still a three-pack option, like the original Lyra. But the units have an arched top, with a light blue tinge underneath like the Blue Cave making them much more stylish in appearance. However, whilst this trio of arches might look aesthetic (in a sci-fi kind of way), they're not just shaped like this for appearances only. The three legs of the arches actually contain the aerials for the 3×3 MIMO radio.

This is an upgrade on the original Lyra, which had a 2×2 antenna configuration. However, things are a bit more complicated than this, because whilst the Lyra is tri-band, the Lyra Trio is dual-band, offering AC1750 performance compared to the original Lyra's AC2200. This sounds like a downgrade, but the individual 2.4GHz and 5GHz radios are both faster than the Lyra's. You get 450Mbits/sec over 2.4GHz and 1,300MHz over 5GHz. So it's all a bit “swings and roundabouts”. 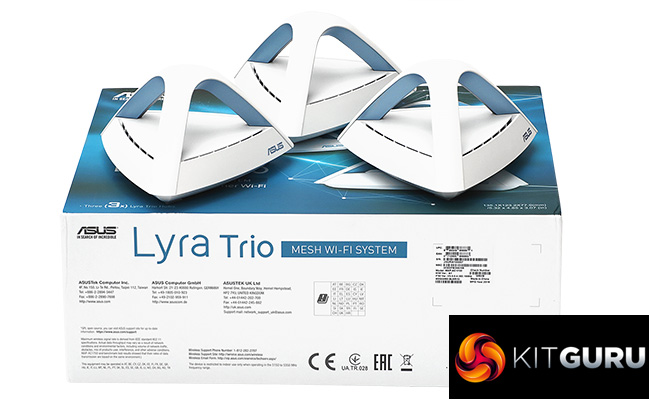 We're not really sure what effect this will have on performance, although usually dual-band mesh systems don't fare so well as tri-band offerings with a dedicated backhaul, such as the NETGEAR Orbi. But ASUS is still claiming a 5,400 square foot coverage for a three-unit Lyra Trio setup, which is not far off what NETGEAR claims for the three-pack RBK50. Only our real-world testing will be able to answer whether the claim is true.

The ASUS Lyra Trio is not hideously expensive for a mesh WiFi system either, with a current street price of £269.99 at the time of writing, about £80 less than the original Lyra. If performance is anything like the latter, the Trio could be a bit of a bargain. Let's take a closer look.