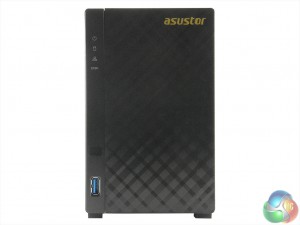 The AS3102T is a tool-free design and the cover and the drives are held in place by thumbscrews. A really big thumbs up to Asustor for creating a stylish, attractive looking NAS.

The front bezel has a design Asustor call diamond-plate finish while the panel that holds the four indicator LEDS, IR receiver, (for the remote control unit which is an additional purchase) and the front USB 3.0 port has a brushed finish. The four LED’s display power, system and network status and disk activity. These lights can be programmed via the ADM OS to adjust their brightness and to set up night time modes for them. 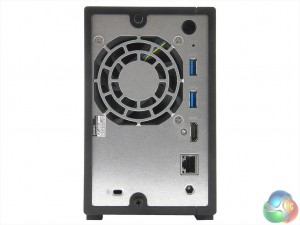 While the tool-less features are great ideas, one that isn’t so bright is the positioning of the power button on the rear panel which could become a real pain if the NAS is hidden away in a cupboard or on a shelf. Granted you may not need to power down the unit that often but it’s still in an awkward position.

Joining the power button on the rear panel are a pair of USB 3.0 ports, an HDMI 1.4b port, a single LAN port, a reset button and a Kensington Security Slot. 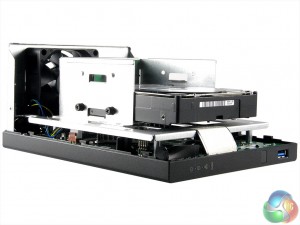 Because the unit doesn’t have any drive doors, the only way to access the drive bays is to take the outside cover off, a job made much easier by the tool free design. The AS3102T supports drives up to 10TB in size, giving it a maximum supported capacity of 20TB. 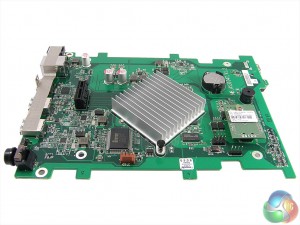 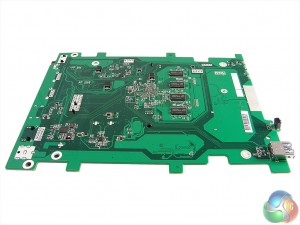 At the heart of the AS3102T is an Intel Celeron N3050, a 14nm dual-core CPU which has a clock speed of 1.6GHz (burst up to 2.16GHz) and with a TDP of just 6W it only needs a passive cooler.  Backing up the processor  is hefty chunk of DDR3L-1600 memory. The 2GB of memory is made up of eight Samsung K4B2G1646Q-BYKO IC’s divided equally between both sides of the motherboard.

Joining the CPU and four memory packages on the front side of the motherboard is an ITE IT8728F IC which monitors the system and an ADATA IUM01-512MFHL flash memory chip which stores the AS3102T’s firmware. Just behind the mini PCIe slot that holds the SATA backplate is a Texas Instruments SN75DP139  IC which provides the HDMI 1.4b support. The two SATA ports are controlled by the N3050 which also supports the three USB3.0 ports.

The rear of the motherboard holds the four remaining Samsung memory modules and a Broadcom BCM57781 IC which controls the single Gigabit Ethernet port. The NAS is cooled by a 70mm YS Tech FD127025HB which spins at up to 5,000rpm.

Previous MSI Pro-Modding competition and GT73 VR at Gamescom 2016
Next SolarCity to be hit with layoffs, executive pay cuts after merger