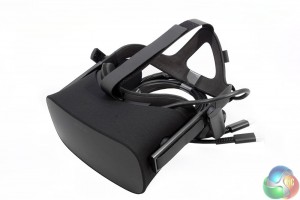 The Oculus Rift headset itself is quite a striking piece of equipment. Anyone who has used a DK1/2/Crescent Bay will immediately notice a number of interesting differences, with perhaps the most obvious being that it is much more compact than previous iterations. The frame seems lighter and more bespoke and the whole package has a much more quality feel to it. 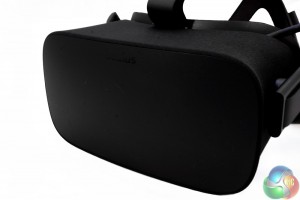 When you first get a close up look at the Rift CV1 though, the fact that it is fabric covered is the most striking. Oculus has kept quite quiet about what type of fabric it is, merely calling it “transformo,” in an unofficial capacity. It is has a feel like that of a cloth mousemat, with a textured but smooth surface. 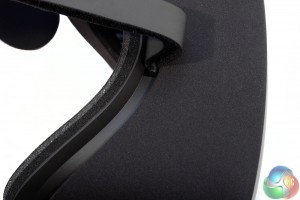 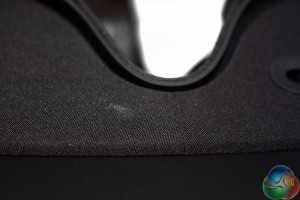 This fabric coating extends almost to the faceplate padding, but not quite. It tucks in neatly and there is not a stitch to be found. The whole device exudes a quality feel, though I was a little sad to see that my pristine, brand new out of the box Rift came with a scuff mark on the fabric.

I have no idea where that came from, but it is a shame that before I even remove it from the packaging, there is a visible mar to the headset's aesthetics. It does not affect its functionality, but for a premium £500+ product, that is disappointing.

The fabric only runs around the sides, top and bottom of the headset's faceplate though. The front is a matt black plastic, that is very closely matched to the colour grade of the fabric, giving it a very uniform look. There is also a small Oculus logo embossed on the front. 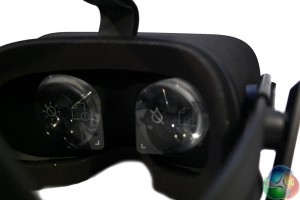 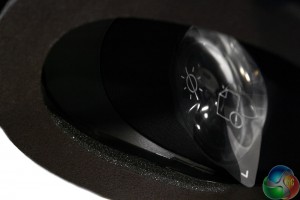 Looking inside, we get our first look at the lenses themselves. They are of an asymmetric design, which is different from the traditional circular lenses of the Rift DK1 and DK2. That is because Oculus created some very bespoke lenses, specifically with VR in mind and that should yield much better quality visuals than previous iterations –  even more so than the extra resolution of the new displays allow.

Oculus' design uses hybrid fresnel lenses, meaning that they use concentric prisms to focus the image in far shorter distance and weight than the big plastic lenses of the past. This should also limit spherical aberration. On top of that, Oculus added a sloping layer to the lens, which is why it can focus at different points along the vertical axis.

Ifixit has a much greater detail on this, so to really get into the science behind lens grinding, have a read there. 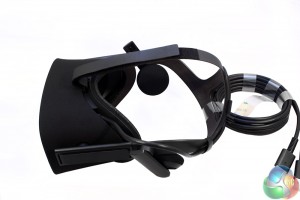 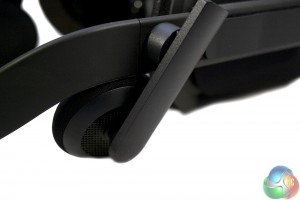 Moving around to the side of the headset, we can have a look at one of its major selling points – the built-in headphones. These operate on a slightly sprung, swivel head, letting you rotate them through about 60 degrees, as well as pry them from your ears easily. 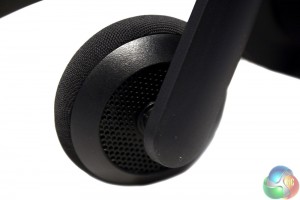 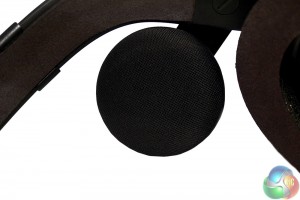 There is no real styling to discuss with the headphones, though they are the on-ear variety, rather than over or in. This should mean you do not get too hot wearing them, though you can remove them if you prefer to use your own set using the bundled “audio tool.” 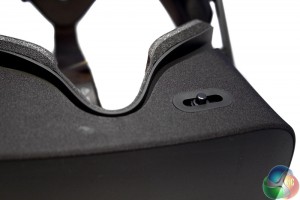 The underside of the headset has a sliding-switch, which controls the interpupillary distance (IPD): the distance between your pupils. This differs from person to person, so tweaking it to be right for you is a must when putting the headset on. 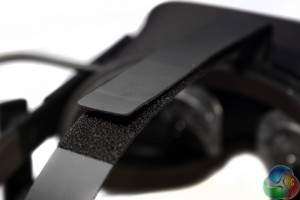 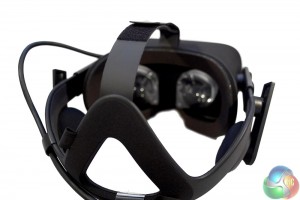 Another big change between the CV1 and previous developer kits, is the headband. This Rift uses a similar over the head strap, with velcro adjustments, but culminates in a triangular strap which sits over the ridge at the back of your head.

There are also velcro adjusters on the side to make for a snug fit that gets the screens as close to your face as possible. However the headband does elastically move away from the faceplate to ease putting on and taking off the headset. 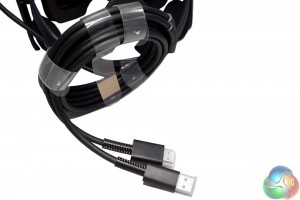 The cable for the Rift is long, measuring in at four metres and culminates in a USB and HDMI connector. These are both required for usage, but show that the Rift does not need too many cables to get working. The headers are very typical and the cable itself is simple rubber.

It leaves the headset by looping out of the left hand side of the headband, which seems like an odd choice as you have no way of knowing where the PC powering the Rift will be located. 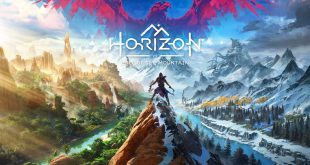